Have you noticed that recently novel writers have begun to explore the realities of old age, and especially of Alzheimer’s? In February 2015 I posted my review of Elizabeth is Missing by Emma Healey. The main character, Maud, in that novel has Alzheimer’s and is treated very respectfully by her creator, even if her misunderstandings cause some humour, mostly it is at the expense of others.

Florence Claybourne is the main character in Three Things about Elsie and she may be suffering from Alzheimer’s.  She also has a series of connected mysteries to solve about her past, involving her best friend Elsie.

Three Things about Elsie is the 35thin the series on older women in fiction. You can find a list of all those previous posts with links, together with more recommendations from readers on the page About The Older Women in Fiction Series. 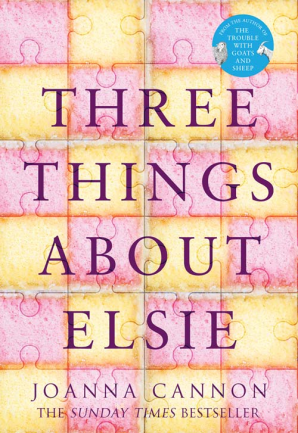 This novel has a light touch. The plot drives it along, sometimes stretching the reader’s credulity, but none the less enjoyable.

The main character, and for most of the novel the narrator, is Flo who is 84 and lives in a sheltered flat, but she is a bit of a loner. She has never married, and was delighted when Elsie also turned up at Cherry Tree Home for the Elderly. The reader learns two things about Elsie very quickly: she is Flo’s best friend and she is someone who always says the right thing to her. This is important for Flo is outspoken, combative and not easily placated once she has an idea in her head. Also, she is finding it hard to remember things. The third thing about Elsie provides the narrative drive and we do not learn this third thing until near the end.

Flo and Elsie are befriended by General Jack. There is a mystery that involves them from the time when they were young women and worked together in the factory. When Ronnie Butler arrives at Cherry Trees Flo is devastated. She believed that he drowned decades before. Indeed, she believes that she killed him.

With General Jack they investigate the new arrival and begin to uncover some unpleasant events in 1953. Elsie’s sister was deliberately killed in a hit and run, by Ronnie Butler. Now going under the name of Gabriel Price, the new arrival plays mind games with Flo. She gradually recovers her memory of the events, with help from Jack and Elsie and a visit to Whitby, and these events are not at all what she thought had happened.

The novel is framed as Flo has fallen and lies on the floor of her flat waiting for rescue. The reader’s sympathies are therefore immediately with Flo, and we are prepared for her to be mistaken about all kinds of things, including the identity of Gabriel Price.

It is hard to show diminishing mental capacities without some crazy moments, some of which can be quite frightening. One of the best scenes in the novel comes when Flo visits the doctor for an assessment of her mental state. He begins by checking her name, but then she disconcerts him by asking his. Then come the questions.

It’s strange how easily you can become flustered when someone is watching you. If they were casual questions, asked at a bus stop or in a supermarket queue, I’m sure the answers would come to us easily, but when Dr Andrews is staring down at you with his pen waiting over a piece of paper, you begin to doubt your own name. He started by asking the day of the week. Of course, I knew it was Tuesday, but going to Whitby threw me off and I plumped for Thursday …

‘Take seven away from a hundred,’ he said. ‘And keep going until I tell you to stop.’

I looked at his clipboard across the coffee table.

‘You have the answers,’ I pointed. ‘Printed at the side.’

Dr Andrews curled his arm around the sheet of paper, like a child in a classroom. ‘You shouldn’t worry about what I know,’ he said …

The last thing he did was hold up a piece of paper. It said Close Your Eyeson it.

‘Because I’m asking you to.’ Dr Andrews held the instructions a little closer.

I heard Dr Andrews sigh. ‘Do you not usually do as someone asks?’

She may be awkward but Flo is very appreciative when treated well. For example, when Handy Simon does not patronise her but offers genuine sympathy and comfort when she needs it. And it is the strong character of Flo that appears to many of the characters in the book to be provocative and difficult: to the staff who run and clean Cherry Trees, excepting Handy Simon; the policeman who interviews her in Whitby; Dr Andrews; just about everyone.

Old women often have wisdom. One of the finest inventions of the novel is Elsie’s idea of the long second, which helps Flo remember.

It’s when you catch the clock, holding on to a second so it lasts just a fraction longer than it should. When the world gives you just a little bit more time to make the right decision. (49)

What Flo remembers about herself is important. Being 84 she has a long back-story. She is not just a forgetful old lady. She has always stood up for people, she has been generous and appreciative. And she has value in the present because she helps people find their strengths.

But if you find Florence Claybourne a little too much on the saccharine side, you could try the corrective of the previous woman in this series: Great Granny Webster. The link is here.

Three Things about Elsie by Joanna Cannon published by Borough Press in 2018. 455pp

Please repeat your subscription as recent difficulties with this blog resulted in the loss of previous ones. To subscribe and receive email notifications of future posts on Bookword  please enter your email address in the box.

2 Responses to Three Things about Elsie by Joanna Cannon