The Wedding Group by Elizabeth Taylor

In The Wedding Group everyone seems to be tied to someone else in an unhealthy way. The title refers to a Wedgewood wedding group, never described, but much admired. The cold, rigid porcelain is a good metaphor in a novel looking at relationships. They are brittle, fragile, and frozen. Elizabeth Taylor scrutinises the ties that bind people, parent-child, lovers as well as in marriage.

In The Soul of Kindness she had depicted a very locked-together pair – Flora’s mother Mrs Secretan and her housekeeper Miss Folley. Miss Folley reads her employer’s letters. Mrs Secretan knows, but is unable to confront the housekeeper or find a way out of the situation. They are tied by this unspoken knowledge of each other in a distrustful relationship. It’s a fearful prospect. 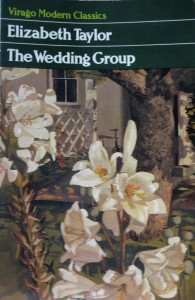 The entrapment theme continues in The Wedding Group. I find the characters are the least sympathetic of any in her novels. Her previous two novels had included monsters, Angel, and Flora in The Soul of Kindness, people so unaware of their own selfishness that they damage others. The Wedding Group includes several portraits of rather awful people, although no one is very sympatique.

The story opens when a young woman, Cressy, declares her lack of faith, thus signalling her intention to move out of Quayle, the community established her larger-than-life domineering artist grandfather. Henry Bretton holds his children and grandchildren through his forcefulness. He likes to be known as the Master. He appears to have been modelled on Eric Gill, or perhaps Augustus John. Elizabeth Taylor deploys her precise observations to reveal the nature of the man: ‘one of his favourite tacks, and the discourse this evening – with no embarrassment at all to himself – was on the subject of woman in the life of man’ (48).

‘For all our precious ideals, our inventiveness it’s the essential, instinctive mother-wife we crave at last. We return, after our escapades or great deeds, to her, for forgiveness and healing and approval.’

Rachel [his wife] tried to look forgiving and healing and admiring, but had an abstracted air.

Cressy escapes to work in the village antiques shop, and to meet David and his mother, Midge. Midge lives for David, to the extent that when he is absent she hardly eats, or cares for herself. He is unaware of this.

He did not know that she dressed with the utmost care for his homecomings in the evenings. He imagined her always as she was now, had never – that he could remember – seen her otherwise. (17-8)

Midge is afraid of life without her son and uses everything in her power to retain his presence. As the story unfolds she becomes more and more dishonest in her schemes to keep him close. When she sees that David will marry Cressy she makes this naïve girl dependant upon her, and does the same to her grandson when he is born.

The mother-son relationship is based on silence, avoidance and slight references to things that matter. She also deploys dishonesty and artifice. He has been indulged for forty years, so they are both culpable. When David has rejected Cressy’s naïve advances, Midge tries to raise the subject with him. This paragraph reveals the meagreness of the mother-son relationship.

Serious matters they had always approached lightly. There had not been so very many of them. But the worries that had occurred had been treated in an off-hand, amused manner. It will all come out in the wash. Indeed they had no other manner with one another. For this reason, she had talked of Cressy’s visit and her confession, as if it were rather absurd; entertaining, certainly. Intuitive though she usually was with him, it had been a little time this evening before she realised he was not smiling, might even be angry at her flippancy. He thought the subject should not have been broached – there had been too much talking altogether – and he wished that Cressy had kept her mouth shut, had stayed away, in fact. Midge could not coax him into laughter. (109)

The lightness of touch here is indicative of a general avoidance in the middle classes in the ‘60s of matters relating to the emotions. It would all come out in the wash.

Another couple tied together in an unhealthy partnership is Archie, Midge’s estranged husband and his Aunt Sylvia. She is a great, spiteful, bed-bound creation. Their routines (French and Italian days, polishing the silver) point up the meaninglessness of their lives. Aunt Sylvia labels her hideous belongings for her beneficiaries according to how she feels about them, often removing their names from spite because they haven’t visited, forgetting who has pre-deceased her. When she dies Archie follows very quickly.

David’s marriage to Cressy is unlikely, entered with little thought by either of them. She is exceptionally naïve, almost infantile, having been brought up in the suffocating community of Quayle, and she exasperates him with her helplessness. It takes a harsh winter, an affair, and the discovery of a great big lie for this trio, David, Cressy and Midge, to untangle themselves. The baby breaks the Wedgwood Wedding Group, and I am not above reading good things into this. The baby’s action will prevent anyone being frozen in a moment in time, especially a romanticised and unreal moment. One is left with the impression that David and Cressy will make a better job of the next bit of their lives than Midge will, but, as with many of her novels, the ending is ambivalent and one feels that the characters may go on make a mess of things.

As usual Elizabeth Taylor is writing about lonely and isolated people, as she says she did in everything she wrote. In this novel, they present a sad view of human lives, attempting to bind people to them in their fear of isolation.

I tried to find an image of the Wedding Group, looking on Wedgwood’s site as well as making a more general search. I have come to the conclusion that – she made it up. So I have added my old photograph of an unknown and much earlier wedding group. 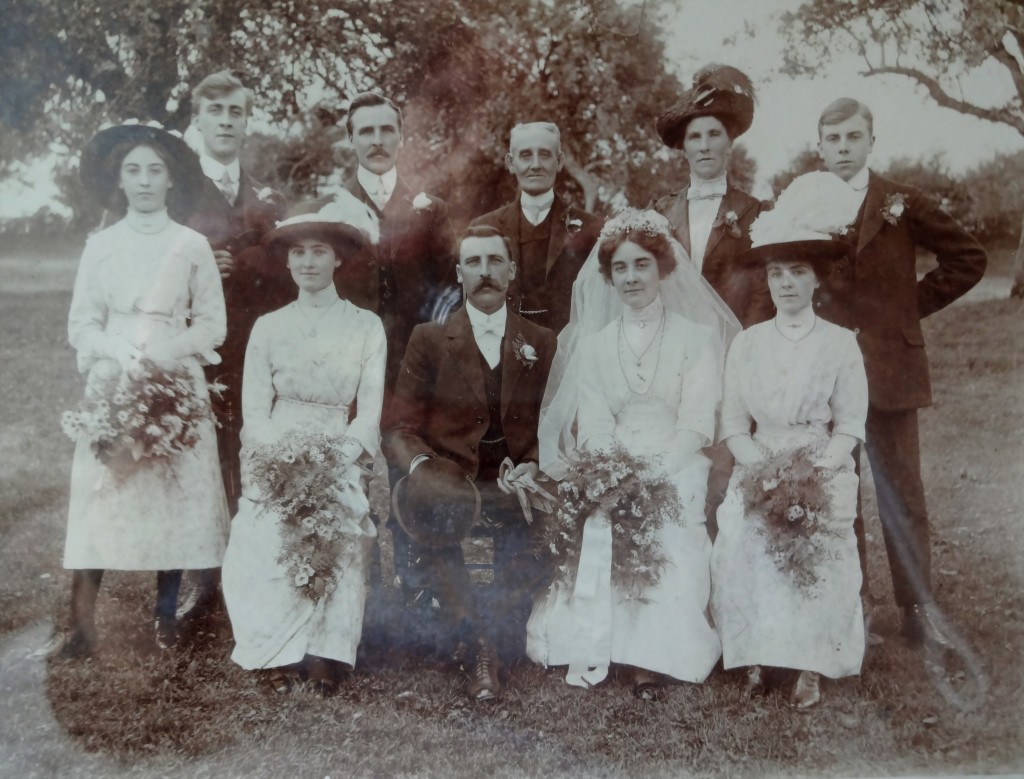 Here are links to two blog reviews of The Wedding Group. The first is from Leaves and Pages, who didn’t like the novel much. Then there is Laura’s Musings, who noted the social trends, revealed in the novel.

The Wedding Group was Elizabeth Taylor’s tenth novel, published in 1968. Her next was Mrs Palfrey at the Claremont, which I reviewed back in February 2013. You can find my comments here, a popular post that has rarely been out of the top ten of my most read posts.

I will be reading her twelfth and final novel Blaming in March. Join me.

Tagged as Angel, Blaming, Elizabeth Taylor, Mrs Palfrey at the Claremont, The Soul of Kindness, The Wedding Group

3 Responses to The Wedding Group by Elizabeth Taylor