The Waves by Virginia Woolf

This book took me much longer to read than I anticipated, and I enjoyed it less than I had hoped. This is a pattern. I first tried The Waves when I was a pretentious 15-year old. I gave up. Later I came to it when I read all Virginia Woolf’s novels in the order in which they were written. I liked it, but not much of it remained with me. I was impressed by its structure, the lyrical evocation of time passing over the waves, and by the six voices of the novel. It seemed a bold experiment, but I was not sure what Virginia Woolf had achieved with it.

Emboldened by participating in #Woolfalong, hosted by Heavenali on her blog, I decided to give The Waves another go. This is my sixth contribution to #Woolfalong. You can find the others listed at the end of this post. 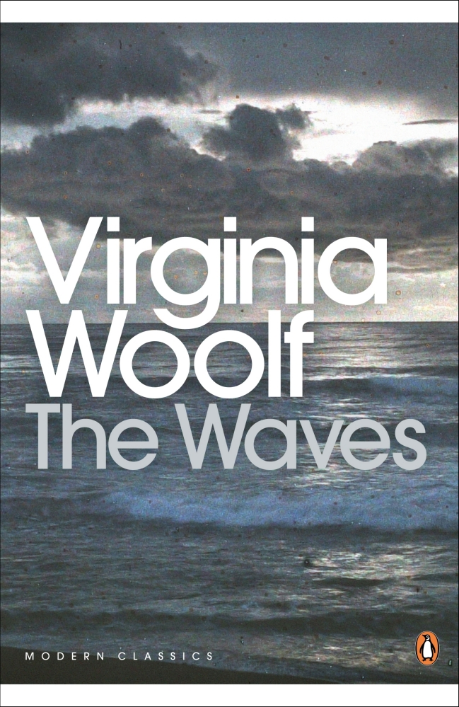 The structure of this book is conveyed through the six voices of the six characters. Their lives unfold through episodic sections. Between these parts are very lyrical descriptions of the waves and the surrounding countryside at successive times of day, beginning at dawn ending 200 pages later with the simple phrase

The waves broke on the shore.

In To The Lighthouse Virginia Woolf had written a similar section called Time Passes, which referred to the material condition of the Ramsay’s house, the animals who lived in it, the people who were its caretakers, and the people for whom it had once been so important.

The other sections of The Waves are reported in the voices of the six speaking characters, each one indicated by ‘Bernard said,’ or ‘Jinny said,’ and so on. The characters are of an age, three boys and three girls, and there is another who never speaks, Percival, to whom they all looked up. He was something of a hero to them, a situation cemented by his early death as a result of a fall from a horse.

We follow these six people from childhood in the garden to Bernard’s death. In the final section his is the only voice and he reflects on the lives we have been reading about. 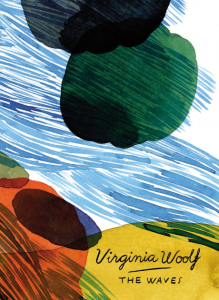 I had several long train journeys and many quiet hours in rural France when I could expect to devote myself to the book, but it took me much longer than I had anticipated. I found that the narrative was too slight to carry me forward. I needed to read more carefully, more slowly than usual. It was like attending a modern dance performance and not being very sure where on stage to give attention.

Some of the writing is dense, unusual, experimental. Here is Bernard noticing that they have moved into another stage in life, in middle age.

‘And time,’ said Bernard, ‘lets fall its drop. The drop that has formed on the roof of the soul falls. On the roof of my mind time, forming, lets fall its drop. Last week, as I stood shaving, the drop fell. I, standing with my razor in my hand, became suddenly aware of the merely habitual nature of my action (this is the drop forming) and congratulated my hands, ironically, for keeping at it. Shave, shave, shave, I said. Go on shaving. The drop fell. All through the day’s work, at intervals, my mind went to an empty place, saying, “What is lost? What is over?” And “Over and done with,” I muttered, “over and done with”, solacing myself with words. People noticed the vacuity of my face and the aimlessness of my conversation. The last words of my sentence trailed away. And as I buttoned on my coat to go home I said more dramatically, “I have lost my youth”. (141)

This passage introduces the image of the drop indicating time has passed, adding to the idea of the steady dripping, sand running out. Virginia Woolf here combines the everyday and concrete (shaving, buttoning on a coat), clichés (such as ‘over and done with’) with this more cerebral or at least philosophical consciousness of how time changes us.

There are some motifs to notice in the text: the drop, the flower, the moths and, of course, the waves. Each wave, each event is followed by another event, similar but different, bringing change, making its mark, both creating (patterns on the sand, piles of detritus) and destroying what it makes. Some events become like talismans; an example is the water poured over his skin that awakens the very young Bernard to the sense that there is something outside of him.

What was Virginia Woolf trying to do? 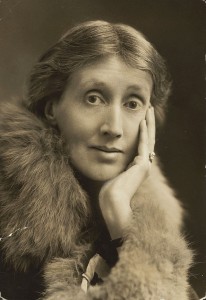 Virginia Woolf was always experimental, and since Mrs Dalloway she had been revealing the world from inside the heads of her characters, rather than show the reaction of the characters to events. The term for this is stream of consciousness, and in an earlier post about To the Lighthouse I said,

But the phrase [stream of consciousness] is inadequate, stream suggesting a linear form, imposed by the limits of words in sentences. But Virginia Woolf conveys the layers, textures, and loops of consciousness, making the image of the stream misleading.

And here she is doing it with six characters over their lifetimes.

In the introduction to the Penguin Classics edition Kate Flint contrasts the approach of Virginia Woolf with novelists such as Arnold Bennett and HG Wells who, in conventional plots, emphasised the importance of the material world.

Here she goes even further than previously in the direction of demonstrating that identity, rather than depending on the concrete circumstances of a person’s life, is primarily constructed from within, through an individual’s deployment of language. (x)

I would go further and say that Virginia Woolf rejected essentialist notions of identity. It is common to suggest that novelists uncover the true identity of their main characters. In The Waves Virginia Woolf shows us that our sense of our self changes, and in relation to others. We know our identity, have a sense of ourselves, only as far as we share, contrast and mutate with others through words.

To the extent that this makes a great novel I am not sure. I think I would have to reread it many times to understand its many layers, themes, motifs and ideas. But I can start with picking out some of the successes that I noted on this, my third attempt.

First those lyrical sections, between the episodes in the life of her six characters, are marvels of writing: imagery, rhythm, colour and timbre. Descriptive passages are often static, a moment for the reader and characters to draw breath. But in The Waves the interludes bring change, are all about change.

The sun rose. Bars of yellow and green fell on the shore, gilding the ribs of the eaten-out boat and making the sea-holly and its mailed leaves gleam blue as steel. The girl who had shaken her head and made all the jewels, the topaz, the aquamarine, the water-coloured jewels with sparks of fire in them, dance, now bared her brows and with wide-opened eyes drove a straight path over the waves. The quivering mackerel sparkling was darkened; they massed themselves; their green hollows deepened and darkened and might be traversed by shoals of wandering fish. As they splashed and drew back they left a black rim of twigs and cork on the shore and straws and sticks of wood, as if some light shallop (see note) had foundered and burst its sides and the sailor had swum to land and bounded up the cliff and left his frail cargo to be washed ashore. (54) 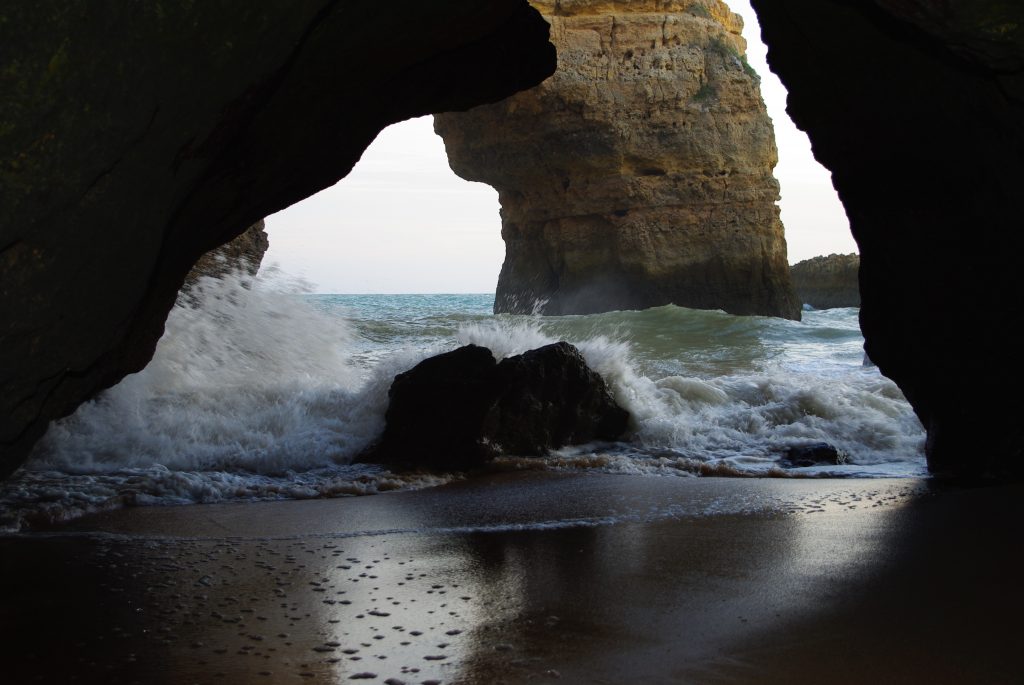 Then there is a section that brought a nostalgic pang to my reading, which follows the passage just quoted. The six characters are now young adults, Bernard and Neville up at Oxford or Cambridge, the others beginning to feel their adultness. In this section the possibilities of life are fully anticipated by the young people.

‘The complexity of things becomes more close,’ said Bernard, ‘here at college, where the stir and pressure of life are so extreme, where the excitement of mere living becomes daily more urgent. Every hour something new is unburied in the great bran pie. What am I? I ask. This? No I am that.’ (56)

It’s a long time since I felt acutely ‘the stir and pressure of life’ as extreme. This novel put me back in touch with that feeling.

And so I feel pleased that I have again engaged successfully with this novel and enjoyed some segments. But much of it seems very obscure, dense and I am not surprised that, as far as I am aware, no other writer has attempted to follow Virginia Woolf to show how people’s identities are formed from inside their heads.

(note) A shallop, by the way, is a boat used for rowing in shallow waters, especially a two-masted, gaff-rigged vessel of the 17th and 18th centuries. It is connected to the more familiar sloop.

4 Responses to The Waves by Virginia Woolf