Virginia Woolf’s first novel The Voyage Out was published in 1915. She was 33 years old and had already been writing professionally for 11 years, and married for three. The publication was delayed by episodes of mental illness. Some of the characters and situations came from her life, but this is not autobiography. The novel does, however, include themes and even characters to which she returned in later writing. And already she was deliberately breaking with the traditions of novel-writing. 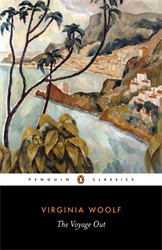 Rachel is 24, and on her father’s boat from London to South America, via Portugal. Also on board are her aunt and uncle, Helen, and Ambrose. They are joined for a while by the Dalloways, Clarissa and Richard. Rachel is young, naïve, has been sheltered and rather badly educated. The Dalloways seem very sophisticated to Rachel and it is Mr Dalloway’s rather clumsy kiss that is the impetus to Helen’s offer to take her under her wing for their extended stay in the fictional English colony of Santa Marina.

Ambrose, Helen and Rachel install themselves in a villa and gradually meet many more English people, guests at the local hotel. These include the immensely clever and very ugly St John Hirst (Lytton Strachey) and his friend Terence Hewet. There are tea parties, a ball, a picnic, and an expedition up river. Rachel and Terrance fall in love and become engaged before Rachel catches a fever and dies.

The title suggests that Rachel will learn and mature, that it is her voyage. She is, in Helen’s words ‘an unlicked girl’ (19), and in Hewet’s, ‘young, inexperienced and inquisitive’ (p183). Her earlier, closeted life behind her, Rachel wants more for herself than many young women would aspire to:

…she wanted many more things than the love of one human being – the sea, the sky. She turned again and looked at the distant blue, which was so smooth and serene where the sky met the sea; she could not possibly want only one human being. (307)

Rachel’s development is influenced by books, social interactions, especially with people more educated than her, and the example of others such as her aunt. And she is shaped by experiences, such as Mr Dalloway’s kiss, and the Anglican service in the hotel.

The novel is concerned with more people than Rachel, although the story largely follows her. It looks at how other characters deal with the people around them, and the interactions between them; and how people respond to the big things in life, including falling in love and dying.

Readers are asked to consider what it means to be young, to grow up, to be a woman, to fall in love and be married. The novel is also concerned with the distances between people, how they see the same events differently. For example, the world of women is hidden from men, Terence explains.

‘But the lives of women of forty, of unmarried women, of working women, of women who keep shops and bring up children, of women like your aunts or Mrs Thornbury or Miss Allan – one knows nothing whatever about them. They wont tell you. Either they wont tell you or they’ve got a way of treating men. It’s the man’s view that is represented, you see.’ (215)

This novel has some similarities to Middlemarch by George Eliot. A strong, but rather innocent young woman wants to make the most of her life. Others are shown in contrast to Rachel (Dorothea) and their actions are understood within the complexity of their social circle, circumscribed by the imagined English colony of Santa Marina (or the town of Middlemarch). 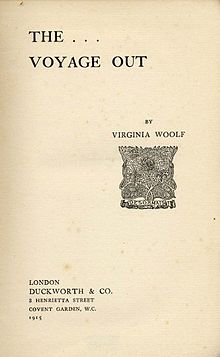 There are also some important differences from the traditional Victorian novel, even if there is a large cast, and the novel is quite lengthy. Most significant is that the perspective is constantly shifting from person to person. Virginia Woolf is pointing to the relativity of human perception, showing how we experience the world differently depending upon whom we are with, who is influencing us.

I remember when I first read this book I wondered when the action or focus of the book would take shape. But it never did. Now on rereading I can see that Virginia Woolf was mirroring life. So little of it is clear, so much is influenced by context – people and place. The use of free indirect style, as the extracts show, makes these shifts evident.

It took me a while to get into. Writers are told that their protagonist has to want something, even if it’s only a glass of water. (Who said that?) But it is not at all clear that Rachel is the protagonist. The novel opens with a scene in which Helen is sobbing because she is leaving her children for the extended stay in South America. Is Helen to be the main character? And what Rachel wants hardly becomes clear, indeed is not really awoken until Mr Dalloway’s kiss, on p73. But although hard to get into, soon it wouldn’t leave me.

The narrative moved slowly, but with many episodes, through the voyage, the sojourn in Santa Marina and then the conclusion of the English families’ holidays. Rachel’s death clouds their visit, especially for Terence, but other hotel guests move on, return home, refuse proposals, take up causes and so forth.

I loved her descriptive prose from the outset. An example is the storm, experienced in this way:

Their sensations were the sensations of potatoes in a sack on a galloping horse. (68)

Virginia Woolf had been on a voyage to Portugal in 1905. Without that trip she could hardly have described that moment when the ship moves off:

Now a tremor ran through the table, and a light outside swerved. At the same time an electric bell rang sharply again and again.

A slight but perceptible wave seemed to roll beneath the floor; then it sank; then another came, more perceptible. Lights slid right across the uncurtained window. The ship gave a loud melancholy moan.

‘We’re off!’ said Mr Pepper. Other ships, as sad as she, answered her outside on the river. The chuckling and hissing of water could be plainly heard and the ship heaved so that the steward bringing plates had to balance himself as he drew the curtain. There was a pause. (11-12)

Occasionally I felt that the events moved too slowly, that moving from person to person meant we were given more of their lives than we wanted. But overall I was very pleased to have reread The Voyage Out as part of #Woolfalong: see Heavenali’s blog. 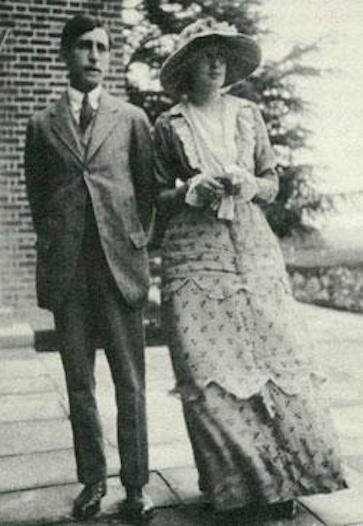 Virginia and Leonard on their wedding day: 23 July 1912

In an earlier blogpost for the same series I explored To The Lighthouse.

The Voyage Out by Virginia Woolf was first published in 1915. I used the Penguin Modern Classic edition (1970) in this review. 380 pp

8 Responses to The Voyage Out by Virginia Woolf