The Squire by Enid Bagnold

Enid Bagnold wrote National Velvet, right? That quintessential book of adolescent horse-mad girl, and young Elizabeth Taylor. She also wrote The Squire, first published in 1938 and republished in 2013 by Persephone Books in their trademark grey covers. The glorious endpapers for this book are Magnolia, a design for cotton and rayon from 1936.

The Squire is curious title. It jars our class-consciousness, being more associated with the beery form of address, as in ‘Same again Squire?’ And it jars with the feminist consciousness of language, including titles. In Enid Bagnold’s novel the Squire is the main character, a woman who is managing a large household, the manor house set in a rural village beside the sea.

She who had once been thirsty and gay, square-shouldered, fair and military, strutting about life for spoil, was thickened now, vigorous, leonine, occupied with her house, her nursery, her servants, her knot of human lives, antagonistic or loving. Twelve years married to a Bombay merchant and nearly five times a mother, she was well accustomed to her husband’s long absences, and to her own supreme command. (p11)

She has seven staff in the house, two in the kitchen, four children and the birth of her fifth child is imminent. The story unfolds gently. We observe the Squire as she passes through the days preceding, during and following her confinement, dealing with domestic problems, finding a cook, managing the lazy butler, spending time with her four children, and conversing with her friend Caroline. The main event is the arrival of the Midwife, a woman of strong opinions. The novel ends with the baby safely born, the Squire taking up the running of the household again after her confinement, the departure of the Midwife and the imminent return of the Squire’s husband.

There is little plot. Events happen: the Squire has to deal with the departure of the cook, an intrusive window cleaner, her butler’s holiday and drunken replacement, her children and a weekly letter to her absent husband. The Squire manages all of this with serenity.

Caroline, her friend from her more socialite past, is still interested in sex-love. She cannot believe that the Squire does not miss the wilder life of her younger days and the capricious attentions of men, but is content with her situation. The contrast between these two offers the strongest aspect of the novel.

The Midwife and the Squire are more in tune. However, the firm ideas of the midwife about how birth should be organised inevitably produce difficulties. She would like to ‘palisade’ mothers, creating a secluded and calm environment, and a place for a newborn to emerge and form their character in the first days of life. Eventually mother and newborn son are integrated into the teeming household.

Enid Bagnold challenges the idea that the marriage is a woman’s destiny, the high point of her life, and towards which her youthful efforts should be expended. She suggests that maternity is just as much a satisfaction and a domain for women, but she is not suggesting that this is the fulfilment of women either. Much of the Squire’s ruminations are to do with the future, when the children no longer need her, and indeed what happens to them after her death. The women are competent at managing complex situations and supporting each other.

A particular charm of this book are the portraits of two children; little odd-ball Boniface. He is not the normal rumbustious male child, and his quirky take on the world and delicate relationship with the Squire are delightful. Lucy is the only daughter, and she is both insightful and caring of others, especially of Boniface. The intimacy of Lucy and her mother is delicately drawn.

There is much to enjoy in this lovely book. We are looking inside a closed and beautiful world. 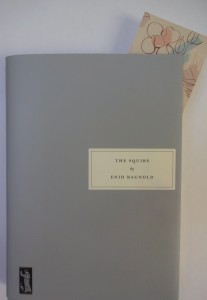 One Response to The Squire by Enid Bagnold