The Soul of Kindness by Elizabeth Taylor

We all know someone like Flora, popular, attractive, without insight or self-awareness, but still everybody’s favourite. Perhaps we even want to be her friend, because some of her lustre rubs off on us. Elizabeth Taylor shows us the damage such a creature can create. The title sounds a warning – the soul of kindness?

As usual the first paragraph reveals much of what Elizabeth Taylor’s ninth novel will explore.

Towards the end of the bridegroom’s speech, the bride turned aside and began to throw crumbs of the wedding cake through an opening in the marquee to the doves outside. She did so with gentle absorption, and more doves came down from their wooden house above the stables. Although she caused a little rustle of amusement among the guests, she did not know it: her husband was embarrassed by her behaviour and thought it early in their married life to be so; but she did not know that either. (p7) 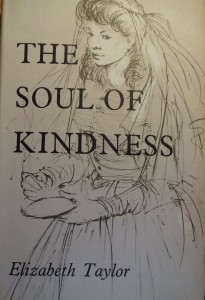 Thus we meet Flora on her wedding day. In the 1960s (this book was published in 1964) the wedding day would have been the culmination of the story for the heroine of many novels.  But in The Soul of Kindness we follow Flora’s life after this event. She assumed that she would marry and continue to receive the adulation and attention of her friends, her husband and her mother.

And so she does. They are always on call to keep her company, to look after her, to protect her, and ultimately to rescue her from the consequences of her misplaced encouragement and Kit’s failed ambition. It was Flora who had planted and nurtured it in Kit.

Here is the moment when she receives an anonymous letter following Kit’s suicide attempt.

‘Let me read it again!’ She took the letter and stared at it with revulsion. It was scribbled in pencil on a piece of paper torn roughly from a sketching-pad. ‘My interference!’ she said in horrified amazement. ‘Why do they blame me? I’ve tried and tried to do all I could for Kit. There’s no one I’ve tried more over. I’m so fond of him. I love him as if he were my brother not just Meg’s. And I know he wouldn’t do anything like that. Why should he? Why, I saw him only the other day. And who in the world hates me so much as to send me this dreadful …’ She dropped the letter, put her face in her hands and began to weep – with long, shocked gasping sobs. Richard sat on the edge of the bed and put his arms round her. ‘On my birthday, too,’ she wept. (p209)

Her husband comforts her, assures her that no one is kinder than she. But we have noticed that her concern is all for herself, none for Kit (notice the emphases). And we readers are already aware that Flora is as flawed as Angel in Elizabeth Taylor’s seventh novel, but perhaps Flora is the more harmful as she lives more sociably than Angel. There are more people to harm.

The list of people who get hurt is long:

She encourages her father-in-law, Percy, to marry his mistress, despite both being happy living separately. (One of the best scenes in the novel concerns Percy, who, when on his own, conducted very loud music, played on the gramophone. The Ride of the Valkyries and the last movement of Brahms’ First Symphony are two of his favourites. Everyone’s favourites.)

Flora’s mother, finding her life empty after Flora’s marriage, took in a housekeeper, but the women are locked together as neither can admit to the other what she has written or read. It is Flora’s husband Richard who helps her see that her life is not over because her daughter has left home.

Kit is the brother of her school friend Meg. He is taken up by Flora and consistently fails to live up to her ambitions for him. He feels a failure.

Richard, her husband, understands that his role is to protect Flora. He is also a force for good in the novel, as it turns out. But her demands mean that he cannot pursue a friendship with a lonely neighbour.

Flora’s school friend Meg is forever in her shadow, and perhaps suffers most from Flora’s actions. It is she who must deal with Kit’s disappointment associated with Flora’s inflated beliefs about his acting talents. Meg is in love with Patrick, and Flora is provoked by her failure to get it together with him, as she would approve the match. Meg blames Flora for Kit’s suicide attempt. When Flora is upset by the anonymous letter and craves reassurance from everyone only Meg withholds it. She sees clearly how Flora operates.

‘Other people have to live with the truth about themselves… She’ll go on and on until we rally round and build up the image again.’ (p215) 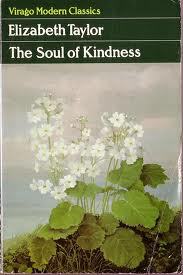 Elizabeth Taylor was at the height of her skill as a novelist when she wrote The Soul of Kindness, creating a central character who is attractive to the reader even as she reveals her flaws. Many of the other characters are studies in loneliness, almost Elizabeth Taylor’s trademark. The idea that she wrote about small, insignificant and cosy lives is unjust given that she is able to conjure up suffering, affection, and, in this novel, human failings.

Vulpes Libris in which the reviewer suggests that Flora is like Jane Austen’s Emma without her wisdom.

Heavenali considers the relationships in the novel and finds much to admire.

The next novel Elizabeth Taylor wrote (published in 1968) was The Wedding Group. It was her tenth. I will be rereading it in January.

And a blog footnote: bookword is a year old. 70 posts and lots of comments later I thank my subscribers and readers. Here’s to more in 2014!

8 Responses to The Soul of Kindness by Elizabeth Taylor