The Emigrants by WG Sebald

Is it a novel? Is it a memoir? Is it a collection of biographies? No, it’s The Emigrants by WG Sebald whose writing seems to generate such questions. One of the most frequent is – in what category does his writing fit? Is it fiction or not? I’m not going to get diverted into addressing that question. 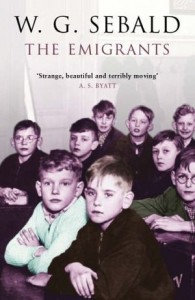 The Emigrants has four sections of unequal length. Each section carries the name of one emigrant: Dr Henry Selwyn, Paul Bereyter, Ambros Adelwarth and Max Ferber. There is a fifth story, contained within the final section. Max Ferber’s mother wrote a memoir of her childhood, which makes her the fifth emigrant. The narrator is himself an emigrant (in reality as well as in the fiction). In these accounts the narrator tells us of his connections with the five emigrants and what he has been told about them: his neighbour Dr Selwyn, Paul Bereyter was his primary school teacher in the village of S, Ambros Adelwarth a member of his family who went to the States, and Max Ferber a painter met during a lonely period in Manchester.

The novel explores themes of loss, displacement, memory and especially of what remains of people, of their lives, of their words. With his own premature death in a car accident in 2001, we can ask such questions also about WG Sebald.

His manner of writing generates another set of questions. Why does he write in very long sentences, and make extensive use of reported speech and reported text? My friend Rose, who recommended Sebald’s writing to me a couple of years ago (thank you so much Rose) spoke of the tension this creates as she reads. And it is carefully crafted so that the reader trusts the author to carry them to the end of the paragraph, or the section, or even the book. Somehow Sebald balances this tension with an apparent ‘take it or leave it’ manner, and by very little differentiation of tone or pace. The reader has the sense that every detail has been carefully chosen.

Then there are those fuzzy black and white photographs, usually relating to the topic on the page, but they might not. What are they for? The Emigrants, for example, opens with a photo of a tree in a churchyard, on the same page that he refers to house he (or a man he refers to as himself) was looking for in the village of Hingham. Sebald constantly presents us with information that may or may not be accurate. For example, there is a market town called Hingham in Norfolk, but picture does not quite match the description in the text. I love this playfulness. One sentence jumped out at me

Clara had bought a house one afternoon on the spur of the moment.

I was especially piqued by this achievement of Clara’s as I am in the middle of house buying. It became a catch phrase last week when I asked my daughter to buy a house for me one afternoon. (She did). But the aside about Clara is an example that Sebald knows that his reader will experience house buying as a very involving experience, but he is writing about something else.

Another question is why is he so highly regarded? Susan Sontag had an answer even before Austerlitz had been published in 2001.

Is literary greatness still possible? Given the implacable devolution of literary ambition, and the concurrent ascendancy of the tepid, the glib, and the senselessly cruel as normative fictional subjects, what would a noble literary enterprise look like now? One of the few answers available to English-language readers is the work of WG Sebald. (A Mind in Mourning, reprinted in Where the Stress Falls, first published in TLS, February 2000).

Not tepid, glib, or the senselessly cruel then. But what are his qualities? Why should you read this author, who in any case was writing in German, even if he was living in England. She points out that his books are all about travel, journeys, provoked by a curiosity about a life, or in the wake of some crisis, and as a quest. She reminds us that a journey is often a revisiting, as in the last of the four stories in The Emigrants.

Sebald described his work as ‘documentary fiction’, according to Mark O’Connell in the New Yorker.

Reading him is a wonderfully disorienting experience, not least because of the odd, invigorating uncertainty as to what it is, precisely, we are reading.

Apart from the reference to Clara, I have not yet quoted from The Emigrants. In part, this is because it is hard to pick out a section, so relentlessly do the sentences and paragraphs move along. Here’s the ending of the first section, which refers to a friend of Dr Selwyn, an alpine guide who had disappeared in 1914. Enjoy the flow of the first sentence!

Three quarters of an hour late, not wanting to miss the landscape around Lake Geneva, which never fails to astound me as it opens out, I was just laying aside a Lausanne paper I’d bought in Zurich when my eye was caught by a report that said the remains of the Bernese alpine guide Johannes Naegli, missing since summer 1914, had been released by the Oberaar glacier, seventy-two years later. And so they are ever returning to us, the dead. At times they come back from the ice more than seven decades later and are found at the edge of the moraine, a few polished bones and a pair of hobnailed boots. [A clipping of a relevant newspaper illustrates the previous page].

So why do I think Sebald should be read? Here are my five reasons. 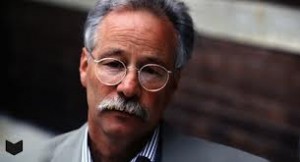 So what’s left for me and Sebald?

I still have Vertigo to read. And he wrote poems that have also been published: Across the Land and the Water, published in 2011.

His essays A Place in the Country were published by Penguin in early May 2013, about influences upon his ideas. At the moment only available in hardback, but no doubt a paperback edition will follow.

I have a ticket for Patience (After Sebald), a film by Grant Lee at the Stoke Newington Literary Festival on Sunday 9th June 2013.

And when I am stranded on my desert island I will have Austerlitz to re-read.

His influence continues through his students. For example, Richard Skinner’s blog has a post that records Sebald’s writing tips: a great collection. Here’s a selection of three:

There has to be a libidinous delight in finding things and stuffing them in your pocket.

Every sentence taken by itself should mean something.

Lots of things resolve themselves just by being in the drawer for a while.

And as always, let’s pay tribute to the translator of The Emigrants, in this case it is Michael Hulse.

Reminder: the next readalong, (book group choice) is Good Morning, Midnight by Jean Rhys for the end of July.

7 Responses to The Emigrants by WG Sebald