We know the bear attacks the family. We know this from the publicity, the blurb and from the Author’s Note which briefly retells the events of October 1991 when a couple who had pitched their tent on Bates Island in Alonquin Park, Canada, were attacked and partially eaten by a black bear. The author had worked as a summer camp counsellor in Alonquin Park around the time of the attack. She tells us,

The Bear is based on my memories and research of this bear attack. I added the children.

We know, too that the children will survive. (No novelist could kill children aged 5 and 2 and be longlisted for the Baileys Women’s Prize for Fiction.) So the tension of the story is not in the question of whether the children will make it, but how they will manage this. 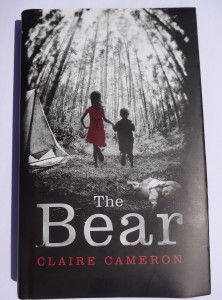 It took me a long time to read this novel because I found that I could only read a chapter at a time, so powerful was the emotional force of the tale being told by Anna. Each chapter was quite short and required a little work to turn the child’s description into a sense of what might be happening. This made it especially vivid.

Here’s how it begins:

I can hear the air going in and out of my brother’s nose. I am awake. He is two years old and almost three and he bugs me lots of times because I am five years old and soon I will be six but it is warm sleeping next to him. I call him Stick. He always falls asleep before me and I listen to the air of his nose. I can hear my parents’ voices. They are further away than I can reach and whispering because they think I can’t hear. I let out a squeak to let Mummy know I am awake and she says, ‘We’re right here’ from too far away. I squeak again and the zipper undoes and I can see the sky in the crack. Her cool hand brushes my hair and her fingers touch my cheek. ‘Sssh, Anna,’ she says, and the sky zips away again. When I am inside the tent the outside is far away. (p3)

Here is a child who already has fears. And we must follow her through a bear attack and an escape with responsibility for her brother. And we also know, from this first paragraph, that Anna is a loved child, and one who feels safe in contact with her family. How will she survive when they are not there to support her?

Even before this question has much time to form we are into the chaos of the bear attack, the stowing of the children so that they survive and their escape hours later to find ‘mess mess mess’. The details of the mess leave the reader in no doubt about the horror that has taken place.

Anna proves very resourceful, protecting her brother and herself from further attack, and managing to defeat the real and imagined dangers of the lakeshore. She achieves much of this following the guidance that her parents established, and by remembering what her parents had done, or told her to do in the past. Anna’s thoughts repeatedly return to the importance of being more than one, even if it is only to be two with her little brother. So when she loses her brother we know she is in for a dark time.

I call him and he doesn’t say anything back. I wait and I think he will come and he doesn’t come. I feel a big cry in my eyes and my stomach goes around. ‘Stick!’ I yell again and no one answers me. I am one. (p136-7) 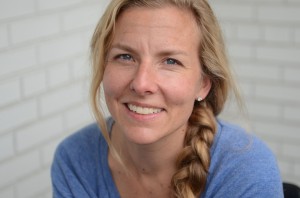 This is a writer who knows children and the fears of parenthood. She is able to convey the emotions that Anna is not yet old enough to name through the physical symptoms. It is one of the major achievements of this novel. Another is that it celebrates the voice of the child, and demonstrates the importance of paying attention to what children say. What does a child understand, what are they capable of, how can they articulate what they have experienced?

A particularly telling creation is the crayon lady, who appears in the hospital after the children have been rescued. Anna is reluctant to draw Mummy as she last saw her on the island, but because she likes to please she tries to draw something. Eventually Anna takes the red crayon, prompted by the crayon lady’s.

She hands me the red.

There is a lot of red left and surprise because so much is on the lady’s mouth and I wish she would go away so I want to take her red. I put it in my fist like a baby holds a crayon and I start to press hard and make the paper go as red as I can and all over the place. … I don’t like the lady and I hope she feels sad because I used her red and I look at her to see. She is looking at the picture and she has one hand on her chest and one on her mouth and she says, ‘Oh, we’ll need to work that through.’ (p168)

This works in several different ways, not least because this child will indeed have much to work through. But Anna is also capable of rejecting the well-intentioned but mistaken assumptions of the therapist. As readers, we know what she has witnessed, but the crayon lady holds on to her preconceived ideas.

Through the same voice, we pick up Anna’s ambivalent feelings about her younger brother, as well as her ignorance of the danger they had endured.

The novel celebrates the resourcefulness of young children, and the importance of their voice.

And here’s a link to a video clip of Claire talking about the book on You Tube. 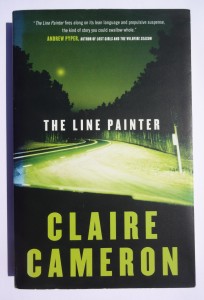 I decided to read this book because I met Claire in Toronto. But I am very pleased to recommend it, and also her first book: The Line Painter.

The Bear is a very unsettling book, and one that deserves its place on the longlist of Baileys Women’s Prize for Fiction 2014. I was sorry it didn’t make it through to the shortlist, but the novels that did are as follows:

The winner will be announced on Wednesday 4th June.

My reading group will be reading A Girl Is A Half-Formed Thing next and has also put The Bear on its list.

To receive email notifications of future blogposts please subscribe by entering your email address in the box at the top of the column on the right.