Anne Tyler’s novel A Spool of Blue Thread was hotly tipped to win the Man Booker Prize 2015. In the event the panel chose A Brief History of Seven Killings by Marlon James. He is young and relatively unknown while Anne Tyler’s book is her 20th and (she says) her last. It would have been fitting to see her win the prestigious prize, especially as it’s always good to see women winning. But it is also good to see a newcomer’s talents being recognized and to enjoy the fuss over novels that the award generates.

And I would also say that A Spool of Blue Thread is not Anne Tyler’s very best novel. While I have gained huge pleasure from all her books for me it is The Accidental Tourist. Last month I reread it for one of my reading groups and remembered all over again its many delights. 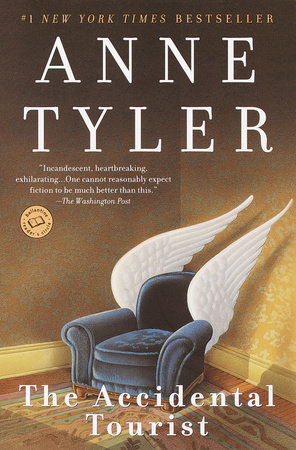 Here is my revised review, originally posted in April 2013.

The Story of The Accidental Tourist

Macon Leary and his wife Sarah are trying to come to terms with the random murder of their teenage son. The novel starts as they return early from a holiday at the beach to their home in Baltimore. Anne Tyler describes how each sits and what each wears. ‘They might have been returning from two entirely different trips,’ she says. Such observations are one of the delights of reading Anne Tyler.

Sarah leaves Macon who does not manage without her, despite devising all kinds of contraptions – like doing the washing in the shower – to make his life easier. After breaking his leg in a self-induced accident, he returns to his childhood home, where his sister and brothers also live.

Macon is rescued by Muriel, a dog trainer. Her life is chaotic, but she is open, generous, logical in her own way, and, as several people observe to Macon, unlikely. People will wonder about such an ill-matched couple, his ex-wife tells him.

As readers, we know that Muriel’s efforts, her persistence, her kindness are just what he needs, and by the end of the book, so does he. And in turn he will ground her.

Macon (pronounced May-con) is one of Anne Tyler’s ‘forlorn bunch’ as she calls her male protagonists. He is an antidote to the usual heroes of Great American Novels. We can’t help sympathising with the hapless Macon as he is assailed by grief, the departure of his wife, a broken leg, a badly behaved dog and a dog trainer.

Macon’s employment is as unsuitable as the rest of his life. He writes a series of guides for people forced to travel on business called Accidental Tourist in London, Paris, …

I love the word ‘squinching’. This is pretty much his way of careening through life, the separation from his wife, the increasingly difficult behaviour of his dog, his ridiculous name and his inability to deal with his losses.

Families are a constant theme in Anne Tyler’s novels because, she says, people are forced together in them and she wants to know ‘how they grate along’. That theme can run and run. Your family probably has some rituals, sayings and episodes that you don’t boast about.

The Leary family have some interesting patterns of behaviour; they get lost whenever they venture into the streets of Baltimore, they never answer the phone and their favourite food is baked potatoes. One of the things that needs fixing in the novel is the Leary family’s dependence on each other and the bizarre rituals they have developed to cope with the external world. The three brothers, including Macon, and their sister Rose, all get lost whenever the venture out into Baltimore. They get lost in every respect until their lives are smoothed by opening to other people, especially Muriel.

Perhaps we all have rituals like the Leary family. Here is a delightful detail about order in Rose’s kitchen.

And she does it gently, wittily, wryly, in all her novels. She says that she has to like her characters, and even when they are behaving in absurd ways, the reader recognises something of themselves, their fears or foibles: perhaps you don’t alphabetise your kitchen stores, but people do organise stuff in their homes in very particular ways (see Bookword post on arranging books for example). Macon’s strategies for coping with the exigencies of travel are only a little more idiosyncratic than yours or mine.

Is she a women’s writer? The question seems to imply she’s a lightweight, and contains an accusation that she is sentimental, homely, homespun. It has been suggested that she is anti-men. Of course she has many male admirers, including John Updike. And it is true that her male characters, including Macon, are quirky. But they are not wimps, unpleasant, grasping or self-promoting. And Anne Tyler herself claims that growing up with a loving father and brothers and having had a good marriage, her experiences of men have been good. ‘Isn’t everybody quirky? If you look closely at anybody you’ll find impediments, women and men both.’

I will be sorry if she never writes another novel but happy to explore her oeuvre again. One of the things I enjoy about her novels is how her characters are engaged in managing the challenges of ordinary lives, and how she continually challenges stereotypes, especially of the adult American male.

I reviewed A Spool of Blue Thread on Bookword in July 2015.

16 Responses to The Accidental Tourist by Anne Tyler (again)