Does this happen in your writing group? Someone reads a short piece, a poem or a story. They lay down the paper and look around the group saying, with a defiant tone, ‘it’s true! It really happened.’ This occurs so often I am wondering what the writer-reader intends.

Is it meant to forestall any critical comments? Does it imply that because it’s true you can’t improve on it? Or does the truth provide a little enhancement – you might not rate this if I call it fiction, but as the truth it can’t be slated? Musing on this as both writer and reader leads me to some thoughts about truth and untruths in fiction.

‘You’re making it up!’ we are told when someone doesn’t believe us. But we know that making up stories is part of the joy of books and reading, and the pleasures of fiction can be enjoyed from a very early age.

Truth in fiction is a curious concept. Fiction – the clue is in the word – it’s ‘made up’, fabricated, a product of the writer’s mind. And yet the writing must be authentic, believable, based on shared (true) experiences. I have just read Mr Loverman, set in the area of London in which I lived for 30 years. I found myself responding to the names and descriptions of streets, the ethnic mix of the area, the rhythms of life that Bernardine Evaristo includes. I found myself responding: Yes that’s right, that’s how it is. But the main character is made up, although I might have come across him … The made-upness and the authenticity go together and are part of the charm of reading. And in Mr Loverman being shown a place I know very well extends my experience so that I look at something familiar in a different way.

When my daughter was young one of our favourite read-together books was The Lion in the Meadow by Margaret Mahy, illustrated by Jenny Williams in the psychedelic style of its time (published 1969). It’s a charming story about a little boy who asks his mother to help him deal with a lion in the meadow. At first she denies the lion’s presence. Reader and child can clearly see the lion hiding in the very English meadow. But the mother, who is busy in the kitchen (it’s 1969!), deals with the little boy in an unexpected way.

“Little boy, you are making up stories – so I will make up a story too …. Do you see this match box? Take it out into the meadow and open it. In it will be a tiny dragon. The tiny dragon will grow into a big dragon. It will chase the lion away.”

The little boy took the match box and went away. The mother went on peeling the potatoes.

Well, of course the dragon chases the lion into the house. The little boy and the lion hide in the broom cupboard. 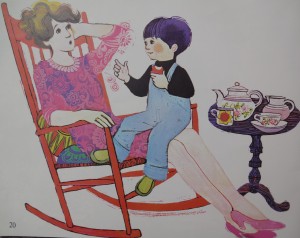 “You should have left me alone,” said the lion. “I eat only apples.”

The mother is perplexed. 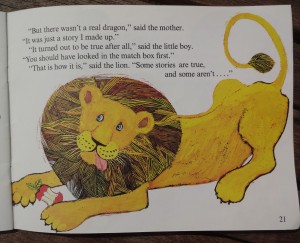 “But there wasn’t a real dragon,” said the mother. “It was just a story I made up.”

“It turned out to be true after all,” said the little boy. “You should have looked in the match box first.”

“That’s how it is,” said the lion. “Some stories are true and some aren’t…”

And the boy and the lion go and play in safety on the other side of the house.

I love the way this story plays with the notion of truth, as all fiction does more or less overtly, The Lion in the Meadow is, in some ways, a meta-story!

All the same, the mother doesn’t sound very authentic. What mother calls her son ‘Little boy’? And the lion’s observation, ‘I eat only apples’ would more usually be written thus: ‘I only eat apples.’ Perhaps the unlikely nature of lion-speak is being indicated here.

Reading The Lion in the Meadow my daughter and I believed both in the truth of the story and knew that lions neither speak nor eat only apples. We negotiate the territory of truth and fiction from an early age. It gets switched on by the magic phrases, ‘Shall I tell you a story?’ and ‘Once upon a time …’

I always left out the final line of the story, however, because I didn’t want it to be true, or to allow my daughter to think it were true. 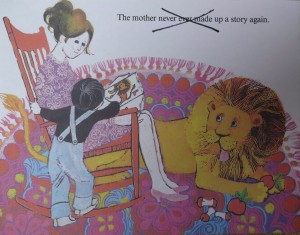 The mother never ever made up a story again.

I hope the mother is still making up stories for the little boy, the big, roaring, yellow, whiskery lion and the dragon. She should. It was a good one: a dragon in a matchbox.

Here’s a link to the review of Mr Loverman by Bernardine Evaristo that I wrote immediately after this post.