Tell me a Riddle by Tillie Olsen

A woman who is old is not merely an old woman. She is all the people she has been in her life. Tillie Olsen tells us that Eva has been a revolutionary, a prisoner, an immigrant, a mother and now, at 69 she wants to live in her own way. She rejects being defined as a grandmother. This is the significance of the title. She refuses to amuse the young, she will not tell a riddle.

Tell me a Riddle is the 29th in Older Women in Fiction series on Bookword. Tillie Olsen’s short story was originally published in 1961, and has gained the status of American classic. 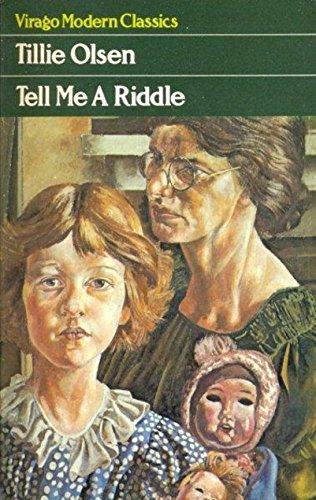 Here is the opening paragraph of Tell me a Riddle. Her desire to live in her own quiet and space brings Eva to a serious quarrel with her husband David.

For forty-seven years they had been married. How deep back the stubborn, gnarled roots of the quarrel reached, no one could say – but only now, when tending to the needs of others no longer shackled them together, the roots swelled up visible, split the earth between them, and the tearing shook even to the children, long since grown. (74)

They have raised seven children and never had enough money. They are Jewish immigrants from Russia to US. Eva wants to live in quiet in her own home, to decide on what she does. David wants to sell their house and live in a care home, the Haven. They sink into warfare: she is often mute, he is furious.

Then she becomes ill and it is terminal. He takes her to stay with various children and eventually to California, where they are looked after by a granddaughter, Jeannie who is a nurse. Eva dies there.

Eva and David’s relationship changes: from hostility, to distance and to fear of impending loss, with an underlying love. The love survives even if he has pushed her, as everyone has, into the role they think she should play. It’s a complex and hard story.

Eva is a woman who at the end of her life tries to live as she wants after a lifetime of giving to others. She rejects, now, the roles people want to give her. But she must confront the wishes of her husband and is defeated by death.

The history of their marriage is sketched in through the story. It is not unusual. Eva has been defined in her marriage by the needs of her children. Eva’s closed, constrained life emerges in their quarrels. Here, for example, David tries to persuade her with arguments about the leisure that the Haven will offer.

“In the cottages they buy what you ask, and cook it how you like. You are the one who always used to say: better mankind born without mouths and stomach than always to worry for money to buy, to shop, to fix, to cook, to wash, to clean.”

“How cleverly you hid that you heard. I said it then because eighteen hours a day I ran. And you never scraped a carrot or knew a dish towel sops.” (77)

He suggests she would enjoy a book group at The Haven. She reminds him that he never once stayed at home with the children so that she could go to a book club. And that she had to ask for every penny they needed, that she was the one required to manage.

She would not exchange her solitude for anything. Never again to be forced to move to the rhythms of others. (79)

This last line is repeated in the story. What is unusual, or was in the 1960s, is the articulation of the deprivation of the years when they had children.

When the family are told that she has at best a year to live, everything changes. We learn that Eva was active in the 1905 revolution, and that David found her in prison. We learn that she still has strong beliefs about how the world should be. She loved her children but no longer frets over their lives. And indeed her children and her grandchildren have become hard to understand. Her life is so different. Here’s a scene from a visit to cousins in California.

Her experiences include hunger; secret meetings; human rights; spies; betrayals; prison; escape. This is not your typical American housewife. This part of Eva’s life is ignored by everyone, is even unknown to them.

As she becomes more sick, she begins to ramble, to taunt David and to sing the songs of her youth. But when she lies in her hospital bed at night and he sleeps beside her in the double bed, they hold hands. As David observes, she finds it hard work to die.

Eva wanted to reclaim the idealism of her youth, which once she shared with David. She is pained that he has lost this vision for the world and that her children never shared it. In the final scene of the short story, David understands what he has lost by abandoning the struggle of their youth.

David, Eva’s husband, has developed a habit of calling her by names laden with sarcasm. You can almost follow the story by these names:

Mrs Free As A Bird  Mrs Take it Easy

Mrs Excited Over Nothing

Other people call her Mum or Granny as appropriate to their relationship. Her seven children and husband have defined her. Only as she dies do we find out that she is called Eva and and she can reclaim her name.

I am reminded of the doctor in Moon Tiger by Penelope Lively, who says of Claudia Hampton ‘that yes, she does seem to have been someone’. 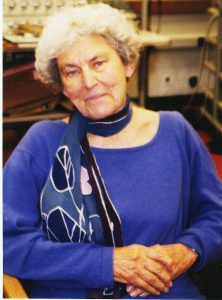 Tillie Olsen by Julieoe via WikiCommons. Tillie Olsen recording Tell me a Riddle and other stories at The Library Of Congress in 1996.

Tillie Olsen was an American feminist who lived 1912-2007. She was born into a family of Russian immigrants and became active in trades unions and the communist party. For much of her life she lived in California. Tell me a Riddle was her first published book, but her output remained small, largely because of her domestic and family responsibilities. She also wrote the non-fiction Silences (1978).

Tell me a Riddle by Tillie Olsen. Published in the UK by Faber & Faber in 1964 in a collection of four short stories. 53 pp