Greetings fellow novel readers. As I will be away in Poland when this post appears I have decided to bring together a small number of books with a simple link. They all have a salutation or greeting in their titles. These titles step outside the norm for novels. Perhaps the authors wanted to make a direct engagement with their reader. But don’t take the connection between these five novels too seriously. It’s my way of presenting some recommendations. 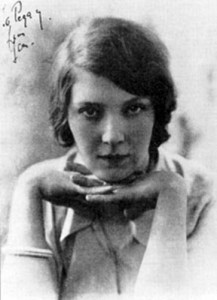 Sophie Jansen is in Paris in the late ‘30s, having a break from her awful life. She is an exiled Englishwoman alone, out of place in London, and on the way to being out of place in respectable Paris. She has a very small amount of money. The story follows her as she struggles to survive and as she recalls her past when she was a young wife and previous times when she has been in Paris.

Told by Sophie in headlong first person narrative, shifting swiftly between the periods of her life she makes one first realise how often one averts one’s eyes from such people and then how close one’s own life could be to that desperation that makes her declare she is an inefficient human being, unemployable, unreliable and unable to hold herself steady in the world. Sophie has gradually crossed the line to become a woman without even her sex to sell.

Some of the writing is surreal, some captures the desperation of the life led in isolation, and some is joyful. AL Kennedy describes ‘her eloquence in the language of human sexual transactions, chilling, cynical and surprisingly moving’. I reviewed this novel on Bookword here. 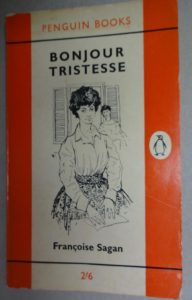 This novel is set in the 1950s during the summer on the Cote d’Azure. Cecile has been living for 2 years with her widower father Raymond in Paris, leading life as his companion, despite his many mistresses. They spend two months in a villa near Nice, with Elsa, his latest mistress. Then Raymond informs Cecile that he has invited Anne Larsen, a friend of his former wife, to join them. Elsa moves on and Cecile becomes determined to come between her father and Anne because they plan to marry.

Cecile schemes to appeal to her father’s vanity and gradually the balance tips in her favour and Anne drives away. Her car goes over the edge at a dangerous bend. Suicide? After Anne’s death Cecile returns to Paris with her father and although they miss Anne, soon they pick up their old lives. This novel was reviewed recently on this blog, and many readers commented on their affection for it. You can read it here.

Bonjour Tristesse by Francoise Sagan (1954) Penguin. Translated from the French by Irene Ash. 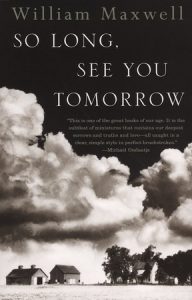 The narrator is an old man exploring what he might have done differently in his life, in particular in relation to a friendship during his school days.

The narrator’s mother died when he was a young child and he is agonised by the loss. His father never engages him about what it means. A kind stepmother is acquired after the necessary 3 years. At school he is bullied and continues to suffer. Playing on the building site of his new house, he meets Cletus Smith, whose parents have separated, and whose mother’s lover has been shot by his father. The boys do not reveal their private agonies to each other. And then Cletus disappears. A couple of years later, when the narrator has moved to a high school in Chicago, he and Cletus pass in the corridor, but neither boy acknowledges the other. The narrator wonders what if …?

Recommended by Heavenali on her blog, which you can find here.

So Long, See You Tomorrow by William Maxwell (1980) Vintage. 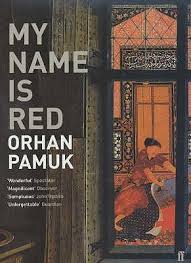 This novel is an elaborate murder mystery, a historical fiction, a love story and an exploration of the cross-cultural influences of the late 16th century between Europe and the Ottoman Empire. It’s like a very richly coloured and embroidered cloth.

A gilder is murdered, and the trail of enquiry involves the elaborate exploration of the workshops, religious outcasts, female roles and the Sultan’s treasury in 1590s Istanbul. The narrative is passed from one person to another, to a colour, to Satan, to at least two people as they die. The richness of the text is its main attraction: in the end the identity of the murderer is not so significant as his reasons for the killing.

My name is Red by Orhan Pamuk (2001) Faber & Faber. Translated from the Turkish by Erdağ Göknar. 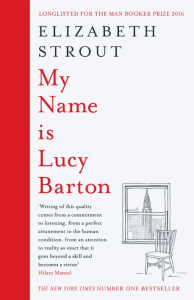 Longlisted for the Man Booker Prize 2016

Lucy is remembering being ill in New York with complications after appendicitis, missing her husband and young girls, looking at the Chrysler building through her window. Her mother, not seen for ten years, comes to visit her from Illinois. Her mother has no sophistication, never been on an airplane before, stays sleeping in the chair in the hotel room for 5 days and night and then leaves.

The women talk, and the relationship of the two is revealed by their conversation and by the gaps in it we see that Lucy’s uncertain identity and sense of self are built from her relationships, especially with her parents, in poverty (cultural as well as financial), and with the city of New York.

My appreciation of this novel appeared on Bookword last year; you can read it here.

My Name is Lucy Barton by Elizabeth Strout (2016) Penguin.