I accidentally omitted this book when I wrote my recent post about fiction with titles in their titles: Books with Mrs or Miss in the title. In a rather pointless act of atonement I thought I would reread it and review it for the blog. And I was surprised that it was less about the Second World War than I had remembered. And just as charming as I remembered, a charm that captured readers and admirers on both sides of the Atlantic. 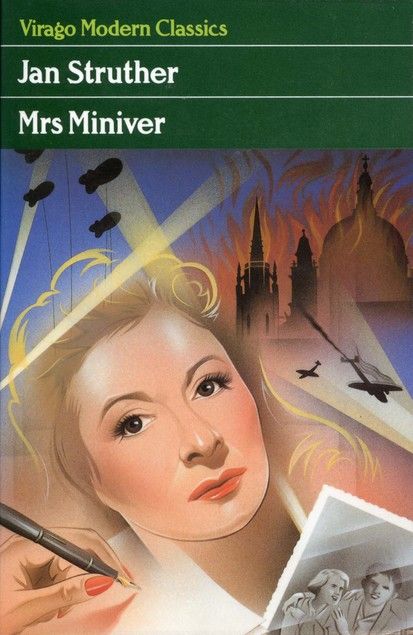 The short pieces from The Times newspaper were collected together and first published as Mrs Miniver in 1939. At the time, Britain was experiencing the phoney war. And the US was still holding on to its neutrality. Famously Churchill claimed that this book had ‘done more for the allies than a flotilla of battleships’, and by FDR to have hastened the entry of the US into the war.

The short blog-like pieces collected together as Mrs Miniver were originally written for periodic publication in the newspaper, and were very popular from 1937-9. It is often said that in creating Mrs Miniver Jan Struther was celebrating the ordinary in life at least as she knew it in the years towards the end of the peace and at the start of the war. And indeed the heroine does frequently refer to her everyday life – a visit to the dentist, the first day of spring, taking the children to Hampstead Heath, visiting London Zoo, social engagements with her friends. This is the everyday life of a small section of British pre-war society, a very comfortably off section. The social life consists of dinner parties and weekends in country houses; the family lives in London and also owns a cottage in Kent large enough to take in seven evacuees as well as their three children. They employ a nannie, a cook and a maid as well as Mrs Downce who looks after their weekend cottage.

Mrs Miniver, or is it Jan Struther, is aware of her privilege. In a letter to The Times, included in the Virago edition and dated December 1939, she considers the plight of the war’s biggest casualty list:

– the small bookseller, the small upholsterer, the garage proprietor, the man who sells old prints, the woman who sells home-made cakes. … the world that we are going to build up out of the revolution has got to be a world in which this kind of distress doesn’t arise. (142-143)

And she adds that in the short-term ‘people are being forced to focus all their attention on wobbly stepping-stones in order to save themselves from drowning’. One can imagine that she might have supported Beveridge’s report in 1942 and the subsequent establishment of the Welfare State.

As it is, there is no bomb damage yet, no Blitz, no defeat before Dunkirk, no real war. Some of the earlier pieces refer to the war scare of 1938, now known as the Munich Crisis. She records the relief that everyone felt when they could continue as before.

In Mrs Miniver the people from the working classes only appear in long-suffering and comic parts, like Ealing comedy extras. The dour Scottish cook Mrs Adie, or the stranded cockney Mrs Downce, or the farmers they help with the hop harvest in the autumn of 1939.

Jan Struther had a positive outlook on life, and she found herself appreciating the spirit of cooperation and new learning in the first months of the war. In a piece entitled London in August Mrs Miniver sits down on a bench next to a woman who is having difficulties learning to tie a reef knot for her First Aid class. She offers her way of thinking about the knot. And when the First Aider has left she reflects as follows:

That is one great compensation for the fantastic way in which the events of our time are forcing us to live. … almost everybody you meet is busy learning something. Whereas in ordinary times the majority of grown-up people never try to acquire any new skill at all, either mental of physical: which is why they are apt to seem, and feel, so old. (111)

afterwards, when all the horrors are over, we shall be able to conjure up again the feelings of these first few weeks, and somehow rebuild our peacetime world so as to preserve everything of war that is worth preserving? (123, letter to The Times, September 1939)

Jan Struther went to the US at the outbreak of the war, and was popular on the lecture circuit because Mrs Miniver celebrated life before the war, and by implication what was to be lost. A sentimental propaganda film, an Oscar-winner, was made by MGM from an adaptation of the collection in 1942. It starred Greer Garson and Walter Pidgeon and took the viewer into the war and to the deaths that resulted from it.

The common association of Mrs Miniver with the war and especially with the Blitz is very strong, thanks to that film. Even in 1989 the Virago cover picked up the theme of the Blitz (see above).

Jan Struther’s husband became a prisoner of war for many years and their marriage did not survive his return. She made a second happy marriage with Adolf Placzek. She also wrote several well-known hymns. She died of cancer in 1953.

Mrs Miniver by Jan Struther, the collection was first published in 1939. I read the Virago edition of 1989, which includes some additional letters and an Introduction by Valerie Grove. 145pp

Please repeat your subscription request, if you made one, as recent difficulties with this blog resulted in the loss of previous ones. To subscribe and receive email notifications of future posts on Bookword  please enter your email address in the box.