A few months ago I reported on my reactions to the first in Rachel Cusk’s trilogy, called Outline. I found myself appreciating that the novel was daring, experimental and challenging to the reader. I noted an absence of story, at least in the usual sense of a narrative beginning, middle and end. Yet the attentive reader is rewarded with a perspective on the world that is moving and intelligent.

Now I have read Transitwhich shares a narrator, Faye who is a fiction writer, and also reports the stories told to Faye by the people she meets.

The title suggests the passage of people from one situation to another. The narrator herself is moving from the end of her marriage to establishing a home with her sons in London. Her house is being transformed. The stories she is told provide illustration of transition, movement, passage of all kinds: stages in life, from one country to another, the process of writing, relationships between people over time, from one marriage to the next and so on.

Faye is to a great extent the passive filter of these stories. She offers them as if to challenge the reader to find the themes, the communalities, the differences, their own meanings. But although the fiction is that the original narrators of the stories are people Faye has met more or less randomly, this is a conceit. Rachel Cusk has chosen them, crafted. This is consciously and carefully wrought writing.

Questioning the assumptions of the novel

I was intrigued by the novelist’s suggestion that ‘character does not exist anymore’. This was more than intriguing, challenging even, as my major work on my own novel at the moment is in the development of the character of one of the protagonists.

The assertion is reported in the transcript of a conversation that appears in the New Yorker: “I don’t think character exists anymore.” A Conversation with Rachel Cusk by Alexander Schwartz (18thNovember 2018).

What I understood from her responses to the lengthy questions about all three novels in the Outline trilogy is that she is attempting to challenge or even to violate the traditional novel and those assumptions that have been handed down from our Victorian forebears. She says that this meant she had to break her own style, which she employed in her previous novels and which have been described as conventional.

By changing the style, for example at the level of the sentence, reducing the idea of the self then ‘other things change their proportions and relationships to each other and to you.’ Her purpose is to consider what remains or appears when the assumptions of the old forms of fiction are challenged and replaced.

She goes on, for example, to question our assumptions about the connections between how we live our lives and what we call character. We no longer live our lives, she suggests, through the ideas of character which we inherited and have never questioned from the Victorian ideas of writers and our ancestorss.

So what emerges from this revised form? This is a novel for the thinking reader. Not a tightly plotted novel where the conclusion must not be revealed (‘I don’t believe in suspense.’) In Transit we are again exposed to some important themes about relationships, especially between women and men, about hate, about control and responsibility, and, of course, of the purpose of a writer and of writing fiction.

See also Outline by Rachel Cusk, on this blog in October 2018.

I’m in a phase of rereading books, and I’m really enjoying it. There are still lots of new and unread books I want to read, but they can wait. I first read Outline when it was published in 2014, but it was recently recommended to me by a friend who writes and it received more attention when Rachel Cusk added the second and third volumes to the trilogy: Transit and Kudos. The rereading has led me to appreciate the writerly intelligence of this novel even more. 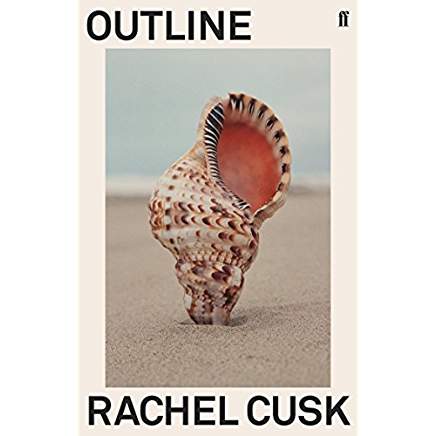 The novel is described as ten conversations. It is narrated by a writing tutor who flies to Athens to provide some classes for aspiring writers. Just about everyone she meets tells her a story about themselves, either because they meet her – sitting next to her on the plane, or socially for dinner, for example – or because they are students in her class. The narrator’s own story is not explicitly told, but the reader must divine her responses and her situation from what is not said. The ten conversations create her outline.

Most of the stories are presented in reported speech, with occasional direct speech. Most of the people she meets are concerned with the failure of intimacy and the difficulty of coping with change. We are given details about their physique, clothes, how they interact with waiters, the sea, other students. There appears to be little direct engagement by these people with the narrator. When one of the students complains bitterly about her lack of direction in the lessons, or when a man tries to kiss her, her emotional reactions are only relayed to us later. Everything seems to be mediated.

So the outline of the title is what surrounds Faye, but who Faye is she does not tell us. Even her name is only revealed casually towards the end of the ten chapters. We know she is a writer, has a son and needs money and she is trying to borrow more. We get a sense of great sadness and recent loss. Even to achieve that outline we must pay attention to the text, to what is and to what is not said. The novel, then asks, some important questions about what we call identity and the place of telling our story or stories in the forming of our identity for ourselves and for others.

This form is daring, experimental, challenging to the reader. There is little story here, at least in the usual sense of a narrative beginning, middle and end. Yet the attentive reader is rewarded with a view of the world that is moving and intelligent. I plan to read Transit and Kudos, the next parts of the trilogy, over the next few months.

Please redo your subscription as recent difficulties with this blog resulted in the loss of my previous list. To subscribe and receive email notifications of future posts on Bookword enter your email address in the box.