Gallimaufry or why my writing group is cock-o-hoop

Gallimaufry. Say it out loud to hear the skip in the middle of the word, like a sedate court dance. Gallimaufry is a late medieval word, probably from the French, meaning a ridiculous medley, or a hodge-podge of odds and ends. It is the title of the anthology by The Totnes Writing Group. We took delivery of 100 copies on 1st December last year. The group had been working towards this for about four months. The copies were impressive: the cover and the piles. The writers present felt immense pride at an ambition achieved, and a successful project completed. 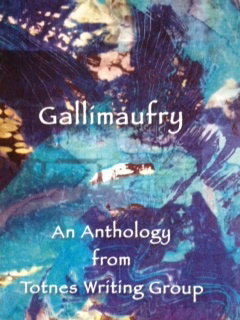 The group was started in 2013 as a library initiative – those libraries again. (see next post on 5th February). The writers are a diverse lot. They include a gardener, care worker, home tutor, counsellor, IT expert, bowls player, theatre producer, artists, teachers, psychologist, editor, journalists, film maker. Some are established writers, others are beginners. A motley group of 15 writers had produced a collection of 36 poems, short stories, memoirs, reflections and illustrations. My own contribution was a short story. 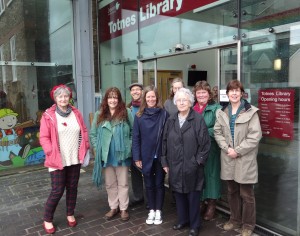 Most of the stress of the project was carried by Fiona Murray who edited the book, dealt with the printers, and all the complaints of writers who had commas and fonts adjusted without their say-so.

Why we did it

Writers like having readers and for many it is the reason they write. Although members read their work to the group, which is important, many of us also seek a wider audience. We began to ask ourselves, why don’t we publish a book of our own writings and then used the skills within the group to find a way to do it.

The anthology provided protection and support for those who love writing but do not want to stick out and who suffer from lack of confidence about going public with their writing. It’s a bit like singing in a choir, one of our members observed. If we publish again we hope more writers from our group will contribute.

What the group learned

At our New Year meeting the group identified the following learnings:

Feedback from our readers suggests that the diversity of themes, styles and genres is an attractive feature of the collection. We did not have a theme although if a writer wanted one we suggested ‘Totnes’. This is pretty much how our group operates – loosely.

The cover and overall professional look added greatly to the attractiveness of the anthology. The silk collage used for the cover was made by Fiona Green, a member of the group.

Writers selected the pieces they wanted to contribute. The editor did not choose what to include. We set an initial 2000 word limit and later, when we worked out we could include more for the same costs, a few people contributed additional material.

The experience of writing is lonely. Our warm, supportive group made one aspect of writing – the production of the anthology – a social process for our writers. Social support is something we all value in the writing group.

Writing is often ephemeral and the production of the collection meant that words took a more permanent form for the contributors. Seeing our work on paper, and alongside the other contributions, made us feel more confident about our writing. It has also made us question our current practice. At the moment the writer reads aloud their text for which they want feedback. Perhaps we should have hard copies of the written text because seeing a poem or short story in print is different from hearing it.

The production of our anthology has made us question the purposes of our group. Are we in a new phase? Do we want to launch into another publication, even one in a different format, or do we want to focus a little more on writing processes?

What we need to think about if we do this again

Some of our practical decisions indicate a lack of experience. We could have thought further ahead about costings, publicity and sales. Since our purpose was not to raise money, but to provide a platform, some of that seemed less important. We still have a dozen copies from our print run. We are on the point of breaking even! 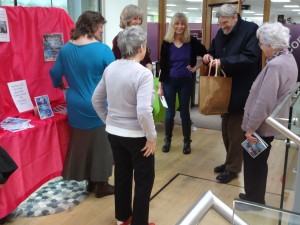 The sales team having some success.

Our frustrations (carried by our noble editor) about the printer’s inability to make corrections without causing further unwanted alterations to the text suggest we need to build in more time and more support for proofreading. We wanted a local printer, but we might look for a more responsive one.

We learned so much about publishing that I would recommend the process to anyone who wants a modest platform for their writing.

I acknowledge the contribution of our discussion within the group about what we learned in the writing of this post. However I have not attempted to define what the group thought. We are a diverse lot and we seldom agree on everything, but this project was A GOOD THING.