Tag Archives: The Sword in the Stone 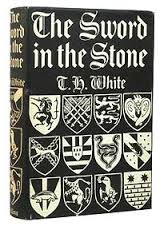 On Sunday evenings the headteacher would read a book aloud to the youngest boarders. We jostled our way into his sitting room after supper and arranged ourselves on the sofa, the window seat, the chairs, the footstools, the rugs, anywhere a twelve-year old of any shape and size could fit. When we were settled Hector Jacks would start to read from The Sword in the Stone. I was reminded of this pleasure – of being read to, of the head’s warm voice, as kindly as Merlin himself – by H is for Hawk.

Wart was an outsider, and at boarding school it was easy to feel like outsiders from our families, sent to live in the strange community of a ‘60s coeducational boarding school. For Wart it came good in the end, after his strange education, transformed into a series of animals, learning from the creatures of a vanished landscape (even in the early ‘60s I knew that the countryside he described had disappeared). Wart withdrew the sword and he was King Arthur. We could all draw out the sword one day. 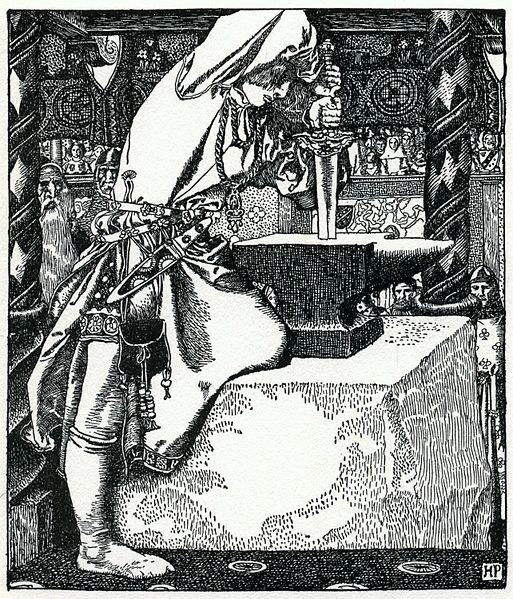 Arthur Pyle: How Arthur drew forth ye sword from The Story of King Arthur and His Knights (1903) via WikiCommons

One of the themes of H is for Hawk is the troubled relationship between TH White and his goshawk. TH White wrote The Sword in the Stone and one of the animals Wart turns into is a merlin. 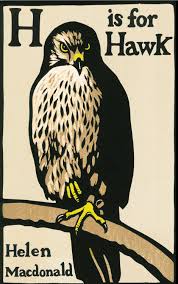 I could not easily leave off reading this book, it lived with me while I was doing other things – washing up, walking, checking emails. I was caught by the intensity of the writing, the wisdom revealed in the dissection of the author’s relationships with death and with a goshawk and the intermingling of her three themes.

First theme: the training of the goshawk Mabel.

I loved the descriptions of the training, (called ‘manning’ huh?) especially when they were outdoors, the slow progress, mistakes, set backs and successes. The passage about her delight in the play that she and the goshawk unexpectedly share is an example. We get minutely observed descriptions of appearance and behaviour, without it ever becoming soppy or anthropomorphic. Here is an example of her writing, describing an early hunting trip.

The next day out on the hill Mabel learns, I suppose, what she is for. She chases a pheasant. It crashes beneath a tall hedge. She lands on top of the hedge, peering down, her plumage bright against the dark earth of the further slope. I start running. I think I remember where the pheasant has gone. I convince myself it was never there at all. I know it is there. Clay sticks to my heels and slows me down. I’m in a world of freezing mud, and even the air seems to be getting harder to run through. Mabel is waiting for me to flush out the pheasant, if only I knew where it was. Now I am at the hedge, constructing what will happen next scenarios in my head, and at this point they’re narrowing fast, towards point zero, when the pheasant will fly. … I’m crashing through brambles and sticks, dimly aware of the catch and rip of thorns in my flesh. Now I cannot see the hawk because I am searching for the pheasant, so I have to work out what she is doing by putting myself in her mind – and so I become both the hawk in the branches and the human below. The strangeness of this splitting makes me feel I am walking under myself, and sometimes away from myself. (182-3)

She uses the beautiful language of hawking: muting, bating, creances. And she uses it to show us step by step about hawking.

She is knocked sideways by her father’s sudden death and partly sees the acquisition of the goshawk as a means to heal herself. Instead it takes her deeply inside herself, too deeply. But she emerges on the other side as she comes to see the need for social interaction as well as valuing the introspection that her time with Mabel encourages. The solitariness of the hawk, the immersion in nature and the countryside will not cure her without the community of hawkers and her own family and friends.

The book also explores the life of another outsider, TH White, who was a homosexual. After a miserable time at boarding school, he tried to become a good teacher at Stowe but left just before the Second World War. Helen Macdonald reveals that his training of Gos was cruel, despite his intentions. It arose from his attitude to education (as a teacher and a miserable school boy) not out of knowledge of the hawk. White believed that you need to face up to things, including the challenge of his goshawk. It is also the message of The Sword in the Stone, a comfort to a homesick child, but ultimately judgement is required about when to stop toughing it out, and do something else.

H is for Hawk has been highly praised in blog and newspaper reviews and is shortlisted for the Samuel Johnson Prize for non-fiction (winner to be announced on 4th November). I would not be surprised if it won for the quality of its descriptive writing. I have only recently begun reading nature writing. The Old Ways by Robert Macfarlane is another good read. Perhaps there is a new type of nature writing.

Vulpes Libris in which the reviewer, Hilary, said ‘it knocked me sideways’

Emily found it ‘a staggeringly good read’, despite the fuss. Read her comments on Emily Books.

Rachel Cooke in the Guardian

Any different views? Any recommendations along the lines of people who liked H is for Hawk also liked … ?