Tag Archives: The Spoils of Poynton

In a Summer Season by Elizabeth Taylor

This is a novel about love of many different kinds. It is also about love’s tendency to appear and disappear – indicated by the title. For all the characters in this novel, the summer season changes their experience of love. Elizabeth Taylor knew what she was doing in this, her eighth novel. She manages a complex cast of characters and has the confidence to let her story unfold.

Kate Heron is the protagonist. She is around forty and has recently married for the second time. As she is well off, her husband Dermot is able to be unemployed for stretches of time, although he tries his hand at growing mushrooms and at entering a partnership in a travel company in London. Kate has a sixteen year-old daughter, Lou, back from boarding school for the holidays, and a son, Tom, who is working his way up in his grandfather’s business. At the start of the novel one feels that Kate and Dermot are doomed, but not for the traditional reasons she and he separately suspect are harboured by Kate’s former friends: marrying a younger man, or marrying for her money. Something more complex is implied. 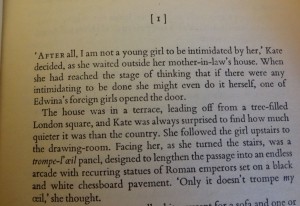 During the summer season Lou falls for the curate, a Father Blizzard. She hangs about places and undertakes parish chores, such as sorting shoes for the jumble sale, hoping to bump into him. One morning he asks her to help him buy a birthday present for his sister.

When they were sitting together in the bus, she felt completely happy, without knowing that to feel so is such a rare experience that it might never come to her again. The very knowledge would have made something else of it. This morning was something she recognised as having been waited for, but with wavering degrees of hope. As the miracle had come about she simply accepted it, but was taking it in little sips, blissfully restrained: for instance, she had not yet raised her eyes to look at his face. (p56)

Elizabeth Taylor is able to capture these adolescent feelings without implying they are inferior to adult love. As autumn approaches Father Blizzard makes a decision to leave the village and join a Catholic monastery in France. Lou returns to school. I love the description of Waterloo station as mothers see off their children. I was catching trains to and from school at the same period (she was writing in the early ‘60s). She has captured the scene at the start of term.

All over Waterloo Station groups of schoolgirls flocked together – their cries, their movements birdlike, as was their way of keeping to their own kind. Other uniforms drew only glances of scorn. Schoolboys, returning too, were less gregarious. They stood alone at the bookstalls or thoughtfully put pennies into slot-machines, unimpressed by so much feminine gaiety. (p206)

Tom is used to having girls at his beck and call, has become practised in letting them down gently when he moves on to the next one. But he is smitten with Araminta, when she returns with her father to the village. She is a cool customer, training to become a model, vividly attractive and sexy, but able to control Tom with her unresponsiveness. The reader feels for him in his unsuccessful pursuit. She is a prototype for the anorexic size 0 models of our time.

Dermot loves Kate, but he cant quite live up to his own intentions for himself, preferring to allow the truth to be obscured so that he doesn’t appear smaller in her eyes and those of her friends. He feels his inferiority to her and her friends; it is moral, educational, cultural and he resents it. This resentment is the catalyst for the climax of the story. 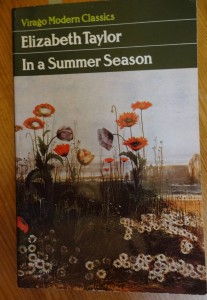 One of the delights of Elizabeth Taylor novels is the references to other novels, in this case The Spoils of Poynton by Henry James, which Dermot does not recognise as a novel. I admit having yet to read this book, but it is about things, and a widow’s battle to retain her spoils – antique furniture. As Susannah Clapp points out in her introduction, ‘piles of discarded, unused and unlovely objects are strewn throughout In a Summer Season. … They carry some force as reminders of the inhibitions and consolations of memory and habit’. The Spoils of Poynton was Kate’s first husband’s favourite novel, and links Kate to him and to her previous life in a way that Dermot resents. It’s a clever, quiet device that also shows up Dermot’s ignorance (and mine!).

Kate is more aware of each person, including herself, than any of the other characters and because she is central to the plot we often see people mediated through her susceptibilities. She has to manage her relationship to Dermot. Elizabeth Taylor lets us know, in this early scene, that Kate understands Dermot very well.

On the way home they quarrelled – or, rather, she listened to Dermot quarrelling with an imaginary Kate, who supplied him with imaginary retorts, against which he was able to build up his indignation. Then, when they were nearly home, he began to punish himself, and Kate realised that the more he basked in blame, the more it would turn out to be all hers; her friends, for close friends of hers they would become, would seem to have lined up to aggravate him, and her silence would be held to account for his lack of it. (p34)

As readers we are encouraged to have some hope for the couple for the evening ends thus:

He ran his knuckles down her spine. ‘You taste of rain,’ he said, kissing her. ‘People say I married her for her money,’ he thought contentedly, and for the moment was full of self-respect that loving her had given him. (p40)

This is pure Elizabeth Taylor, the temporary relaxation of the tension, and the quiet observation of Dermot’s character.

It is Dermot’s lack of fibre (as they would say) that pushes the story to its conclusion. While there is tragedy, sudden and brutal, all does not end badly for Kate in a conclusion that does not satisfy all readers. We are unsure what kind of future Kate will have, but the final short chapter allows us to see how where love leaves her and the other characters, a year on from that summer season.

As always in her novels there are some great comic moments (preparing for the jumble sale, watching tv, Dermot’s mother). Great tenderness is shown towards Lou’s ‘calf ’love and Tom’s hopeless infatuation with Araminta.

But the uncertainties of love are also revealed with some tenderness: Kate’s dream about Charles, Dermot’s desire to do better by Kate leads him to lie and deceive; Lou’s growing up so that the departure of Father Blizzard is not such a blow; Lou crying about her mother and Dermot after he has accused her of being ‘bloody smug’; Charles’ comfort; Tom’s inability to recover from Araminta’s death.

Some other blog reviews of In a Summer Season:

Of Books and Bicycles

Next month I will be reading Elizabeth Taylor’s ninth novel: The Soul of Kindness, published in 1964. Join me!

Tagged as Elizabeth Taylor, Henry James, In a Summer Season, Susannah Clapp, The Spoils of Poynton