The Orange Grove by Larry Tremblay

This novella, The Orange Grove by Larry Tremblay, begins in the parched landscape of a Middle Eastern country, or perhaps of Afghanistan, in the shadow of mountains. A family is struggling to make a living from the orange grove, against the harshness of the climate. Then the grandparents’ house is bombed from over the mountains, and the way is open for revenge and the gradual destruction of the survivors of the family. 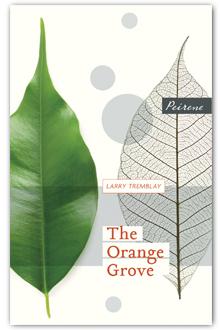 The Orange Grove was written by a Canadian writer, who is also a theatre director and actor. It was translated from the French by Sheila Fischman and published by Peirene Press in the East and West Series.

Larry Tremblay seems to invite the reader to share his struggle to understand participation in war and violence. The novella concludes in a North American city, where a theatre teacher, Michael, is staging a play about war and violence. Among his student actors is Aziz, a twin, now twenty, who grew up alongside the orange grove. Michael and Aziz struggle to find the ending for the play that will reflect something of the reality of the experience of violence and of Aziz’s experiences in particular, and the reality of its aftermath.

He [Michael] was asking himself the same questions about evil. It was too easy to accuse those who committed war crimes of being assassins or wild beasts. Especially when those who judged them lived far from the circumstances that had provoked the conflicts, whose origins were lost in the vortex of history. What would he have done in a comparable situation? Would he, like millions of other men, have been capable of fighting for an idea, a scrap of earth, a border, or even oil? Would he, too, have been conditioned to kill innocents, women and children? Or would he have had the courage, even if it meant risking his own life, to refuse the order to shoot down defenceless people in a burst of gunfire? (120)

The story of the twins, Aziz and Ahmed, attempts to bring us closer to such circumstances from which families were unable to escape. The father and grandfather of the twins tend the orange grove. One night the grandparents’ house is bombed and they are killed. Soulayed arrives preaching revenge, and demands that one of the twins is prepared by his father for a suicide mission on a base on the other side of the mountain. Ahmed is chosen. But Aziz has a terminal disease and their mother asks Ahmed to allow Aziz to die in his place.

The novella follows what happens after one twin leaves with the suicide belt to cross the mountain and how eventually the other twin goes to North America. He decides to become an actor, hearing so many voices in his head. Through his difficulties in helping Michael conclude his play he retells his experiences of the aftermath and dilemmas he and his family faced, especially when the truth about the target of the mission was revealed.

He addresses the audience at the end of the play.

‘No, you don’t need to have a reason or even to have right on your side to do what you think you must do. Don’t look elsewhere for what is already within you. Who am I to think in your place? My clothes are dirty and torn, and my heart is shattered like a pebble. I cry tears that tear at my face. But as you can hear, my voice is calm. Better still, I have a peaceful voice. I am speaking to you in a voice that is seven years old, nine years old, twenty years old, a thousand years old. Do you hear me?’ (138)

You cannot fail to be moved by this story. Meike Ziervogel, Peirene Press publisher, said ‘this story made me cry. … This story reminds us of our obligation to forgive – ourselves as well as others’. We cannot fully understand individual experiences of the horrors of the world. But we can hear. And we can know that all refugees begin by being forced to leave their homeland, through violence, often committed for revenge or to create unrest and more violence. A thousand stories, not all ending well. Not all heard.

Translated from the French by Sheila Fischman