We know that books change lives from countless accounts by writers and readers of early immersion in libraries. How many times have you read “I wouldn’t be a reader/writer if I hadn’t spent my childhood in libraries”? Libraries and books open eyes to the world beyond the everyday, beyond the immediate and into new imaginary places and adventures. Neil Gaiman said this more eloquently and powerfully in his lecture: Reading and Obligation. Note that word Obligation. Our society has an obligation to provide libraries. 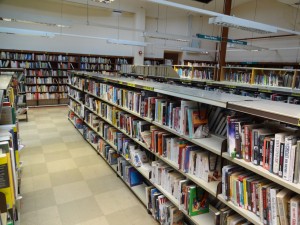 Libraries are more than the collection of books. They provide other services: loans of DVDs, CDs, access to newspapers, journals, courses, local information, pamphlets, computer time, story-telling, spaces for poetry and writing groups … Libraries have a communitarian function.

A library in the middle of a community is a cross between an emergency exit, a life raft and a festival. They are cathedrals of the mind; hospitals of the soul; theme parks of the imagination. On a cold, rainy island, they are the only sheltered public spaces where you are not a consumer, but a citizen instead. (Caitlin Moran, The Library Book p92)

The Library Book is published by of The Reading Agency, which works hard to support reading, including libraries. Their strap line is: ‘Because everything changes when we read’. There are 4,200 public libraries in the UK. We must not lose them. And that’s why everyday is Libraries Day.

I have been with my writing group at Totnes Library (a new library, opened less than a year ago – what a treasure!). We had live music outside our meeting room and 15 writers focusing on life writing. Where are you on National Libraries Day?

Four reasons to save our libraries

Our public libraries are under threat, easy targets for council cuts. The main reason to save our libraries is of course their contents: the books. ‘Because everything changes when we read’ is the strap line of The Reading Agency. Look at the sterling work they are doing to support our libraries, including publish The Library Book, edited by Rebecca Grey.

Here are four more specific reasons to save our public libraries.

ONE: because they are much more than sources of books and information services.

A library in the middle of a community is a cross between an emergency exit, a life raft and a festival. They are cathedrals of the mind; hospitals of the soul; theme parks of the imagination. On a cold, rainy island, they are the only sheltered public spaces where you are not a consumer, but a citizen instead. (Caitlin Moran, The Library Book p92)

The books and the buildings, the services and resources offer all this and more to everyone, whatever age, erudition, wealth, class, colour, status, no matter what. Come in.

TWO: libraries nourished authors and readers. They are ‘places of incredible glamour, possibility, power, excitement and pleasure,’ according to Stephen Fry. Annie Dillard, writing in An American Childhood, describes her experience in Pittsburgh.

The Homewood Library had graven across its enormous stone façade: FREE TO THE PEOPLE. In the evenings, neighbourhood people – the men and women of Homewood – browsed in the library, and brought their children. (p81)

Here she found The Field Book of Ponds and Streams, and learned that other people in the city, despite the lack of ponds and streams, also borrowed this book. This is part of the mystery and wonder of libraries, the anonymous intimacy with other people who read the same books.

This was the most private and obscure part of life, this Homewood Library: a vaulted marble edifice in a mostly decent Negro neighbourhood, the silent stacks of which I plundered in deep concentration for many years. … I would never meet those Homewood people who were borrowing The Field Book of Ponds and Streams; the people who read my favourite books were invisible, or in hiding, underground. (p83)

Annie Dillard went on to write magical, close observations of life in ponds and streams, retelling the details of cycles and creatures around her home so that I felt I was peering over her shoulder at lacewings, muskrat, goldfinch and water currents when I read Pilgrim at Tinker Creek.

So save our libraries for the future authors now hunkering down among the shelves, and for the ones who will come after them and for the readers.

THREE: Libraries connect people. Here are two examples from fiction. The new British Library is the location for a short story by Toby Litt, and concerns a love affair conducted through the titles on the request slips for books. It’s called Rare Books and Manuscripts and can be found in an anthology of London writing: Diaspora City.

A librarian’s monologue in The Library of Unrequited Love, by the French novelist Sophie Divry, also concerns love among the stacks, but exploring in its rambling course the visitors, the purposes of a library, hierarchies among the staff, her work in charge of the geography section and so on. It’s charming, quirky and sad, and a very enjoyable gift from my kind sister.

Libraries provide connections with people who might be different in ways we recognise in ourselves, as Stephen Fry discovered growing up gay in Norfolk. And libraries provide connections to our past through memorials. My previous post was about an inaccessible library as memorial (Judenplatz in Vienna). This photo is of the war memorial in my local library in Stoke Newington, North London. It is a very long list of names. 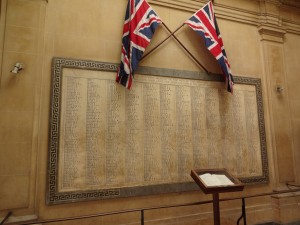 FOUR: They embody communitarian and democratic values. Libraries affirm something important about relationships in the community without reference to economics. You want to read this book? Take it and bring it back in a few weeks. No charge. No deposit. And in that money-free transaction social value is affirmed not just between the library and the borrower, but between the library and its community.

And after the libraries are gone they’ll come for the other books, and then for the people who write them. Julian Barnes in The Library Book has a sobering story about a great event, the eponymous Defence of the Book, set in the future but echoing Niemoller’s famous lines First they came for …

And a couple of blog notes: