Few books have unsettled me as much as The Little Red Chairs. In my reading group we agreed it was a powerful, difficult and in some ways enchanting book. The evil in the novel would be unbelievable if it weren’t based on the real story of the Beast of Bosnia, Radovan Karadzic. There is also a luminous description of a village in the West of Ireland from which the main character flees, and innumerable other stories of displacement and loss from around the world. And we all loved the anarchic, chaotic and over the top performance of Midsummer Night’s Dream in the final chapter. 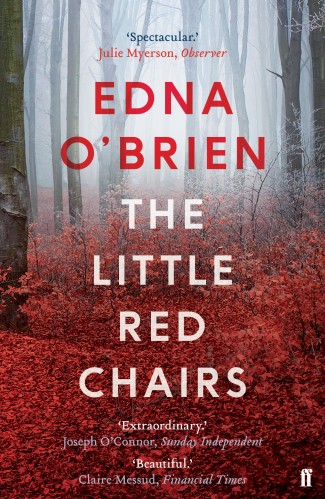 There are many stories in this novel, to the extent that it could be argued that telling stories is proposed as therapeutic and healing to individuals and to communities. The story that leads the novel begins in a rural community with the arrival of a visitor. He tells them he comes from Montenegro, and without explanation he settles in their community offering himself as a kind of new age healer. Fidelma, an energetic and attractive Irish woman who longs for a baby which she is unable to conceive with her older husband, asks Dr Valdimir if he will help her conceive. He agrees and the consequences are truly terrible.

There is tension from the opening pages. Dr Vlad does not fit in this generous community, in this gentle landscape. And we have been given plenty of warnings that wicked things are going to happen.

The title: to commemorate the 20th anniversary of the siege of Sarajevo, 11,541 chairs were laid out along 800 metres of Sarajevo street. 643 of them were small chairs representing the children who were killed during the 1425 days of the siege. The paragraph explaining this precedes the first section of the novel. 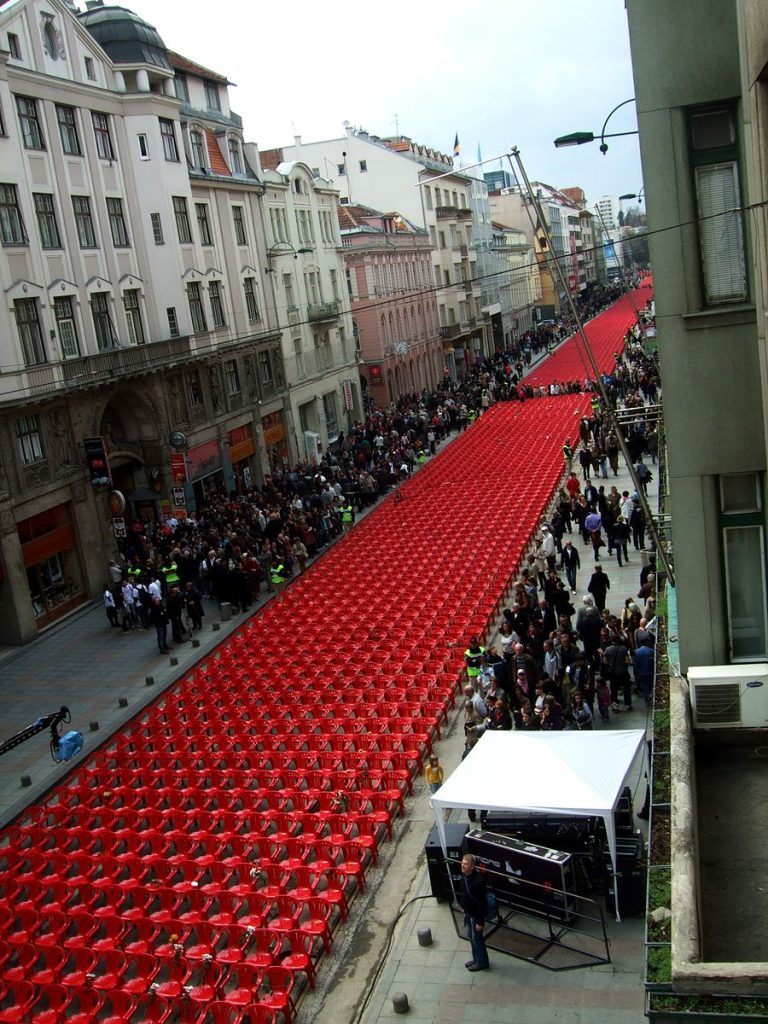 Dr Validmir: Vlad is not a name to inspire confidence. He is portrayed as a dark character, always in black clothes, secretive, mysterious, untrusting, on his guard.

The dream: And if we still are unaware of the provenance of this man, Edna O’Brien gives us his dream, in which his collaborator, K, relates the terrible events of the siege of Sarajevo and the war in Bosnia.

Moju: the mute kitchen porter at the Castle Hotel reacts to the voice of Dr Vlad with complete hysteria.

The story follows Fidelma as she is violated by disappointed followers of Dr Vlad. She flees to London, and falls to the bottom of the heap as she tries to find accommodation and work, to simply survive. Small acts of kindness, different communities, havens, help restore her. Finally she goes to The Hague, where Dr Vlad is on trial. His final speech to the tribunal is chilling, as he denies every charge in an increasingly illogical and crazy manner. Fidelma is able to name him for what he is.

There is so much in this novel, the reading group felt it could have been twice as long to do justice to the lives within it. We asked and discussed all kinds of questions. We were interested in the contamination by evil and what restores, redeems people.

The villagers watch reports of Dr Vlad’s capture on tv.

‘But the contamination has happened,’ Schoolmaster Diarmuid said and there were knowing gasps. Father Eamonn, who had not stirred from the fire, just looked across from the fire at her and shook his head, dolefully. (134)

How did Dr Vlad manage to evade capture for 13 years? Should communities be less trusting? Is there something in the man that answered their needs, not just Fidelma’s? Is that the nature of the contamination?

Small gestures, the littlest bit of trust may be required to help restore human relations. The offer of a job, accommodation, friendship, these things are of huge significance in the life of those who have descended so low, who are lost.

One of the strongest scenes in the novel is Dr Vlad’s defence of himself at the court in The Hague. He begins in a reasonable tone, and then ‘in vivid strophes and with blazing contempt’ he attacks the prosecution and pours contempt on every piece of evidence and every witness. The court listens in silence.

They sat politely, bludgeoned from the sheer onslaught of rhetoric and evidence. As he cited document after document, raved, ranted, repeated himself and finally, declared that Serbs did not have any intention of taking that city, that there had been no siege and that it was a delusion and invention on the enemy’s part. (264)

I write this following the inauguration of America’s new president. The vilifying of the press, the argument about numbers of attendees, the bluster, the desire for the accepted version to be what the administration wants it to be … These seem to be from the same kind of twisted minds. It is offensive to those of us trying to live with integrity. And I thank Edna O’Brien for this amazing look at a sad aspect of humanity.

For another review is available from Heavenali on her blog in October 2015.