Here are some recommended reads from the last six months. There are so many books around at the moment that deserve to be read I’ve put together four for today’s post (and will recommend another four very soon). 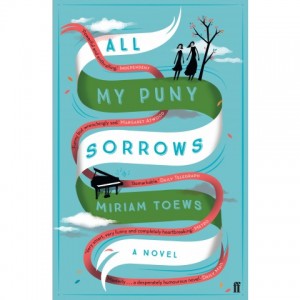 This is a novel that holds you tight, makes sure you don’t escape. Look, it says, look! What do you do when someone you love really, really wants to end her life? Someone like your sister? Do you help her?

Elfreda is a famous pianist and the sister of Yolande, the narrator. She tells us how Elfreda wants to commit suicide, and the novel begins as she is hospitalised after her most recent attempt. We find out that their father also found death in front of a train. The novel concerns the attempts by Yolande and other close to Elf, to keep her alive. But then Yolande has to consider the request ‘to take me to Switzerland’, to Dignitas, because she sees her sister’s unhappiness.

Miriam Toews is a Canadian novelist, who draws from her Menonite background. She knows how to create sparky characters, with lives full of the stuff of living. And she knows how to portray sisters and adult relationships. Yolande is sparky and flawed. The emotional content of the novel is crafted so that the reader cares what happens to both sisters, and yet the material never becomes mawkish. It’s very moving and very challenging.

The novel explores a person’s right to die; whether another person should help them; the pain of knowing your loved one wants to die; the pain when loved ones do die; and how families support each other. I couldn’t help comparing this book to Me Before You by Jojo Moyes in which Will’s disability made the questions less tricky than for Efl, the successful concert pianist and in which the theme of assisted suicide notched up the tension rather than encouraging reflection on the dilemmas of assisted suicide. 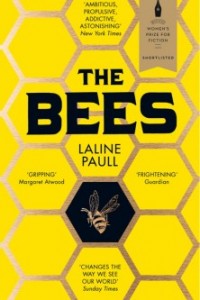 This novel was short-listed for the Baileys Women’s Prize for Fiction 2015. It is certainly a sustained tour de force. The main character, Flora 717, is a bee and the action of this novel takes place in a hive.

Laline Paull has done her research, and the mysterious and rather alien functions of the hive, in particular its hierarchies and the brutal way in which these hierarchies are enforced, is reimagined in a story of the triumph of the humble bee. It is the author’s challenge to present a great deal of close observation of bee behaviour in a convincing way: how bees communicate, the function of smell in their lives, group communication through humming, dancing and chemical means. The world of bees is sustained to the end.

Flora attracts attention by being a little different at birth. She is taken to the nursery, and later to the Queen. Fiercely loyal to the Queen – as are all bees – she learns the geography and culture of the hive as she takes on the roles of nurse, sanitation worker, forager and finally a definitive role in the hives future after it disintegrates through internal conflict. 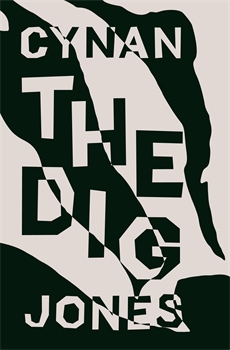 This novel featured as a book of the year for several people in Guardian Review of 2014. I mentioned it in brief post because one character, an older woman, seemed to me to be so beautifully portrayed, albeit very briefly. You can find my comments about her here. There is more to this novel than that one character, of course.

The dig refers to digging badgers out of their setts, and so the novel is about cruelty and loss. The big man is a loner, who hunts badgers for sport, but must evade the law to do so. The practice seems rooted in the traditions of the countryside, in this case in Wales. It may be traditional but the badger dig is gruesome, and the baiting that follows worse. Dennis is also a loner, a sheep farmer grieving for his wife, recently killed by the kick of a horse. The paths of the two men cross with tragic consequences.

The story unfolds in the Welsh countryside, and Cynan Jones has a great feel for place, evoked especially through sound, but also through the taciturn communications of the people in the rural communities, and of the skill and knowledge that both men develop of their crafts. The two main characters, and the others, such as the boy who goes on a dig, and Dennis’s mother, all are evoked through a sparse but powerful style. It’s short, brutal and difficult to read. 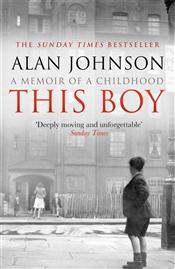 Our book group decided to read this autobiography. We enjoyed it, partly because Johnson has such respect for women, and especially for his mother and sister. He was brought up by them in post-war London slums, where poverty was shockingly present. Deserted by his father, much of his story details the family’s struggle with money, ill-health and the expectations of their neighbours. Told with humour as well as shocking detail, we read because we know our boy came good.

It’s as much a social history, including a reminder of the role of popular music in a boy’s life in the late 50s and early 60s. (This Boy is the title of a Beatles song). It is written with passion, humour and generosity.