A Country of Refuge Edited by Lucy Popescu

How easy it is to feel defeated in these difficult times. Recently friends and I have been asking, what is to be done? What is to be done in response to the increase in anti-immigrant hatred and discrimination in this country? How do we address the issues raised by people who want to keep non-British people out of this country? And how are we to approach the loss of sympathy for those who are seeking refuge? And more such questions. There are things to be done.

What writers and readers can do:

In a series of posts I have highlighted ways in which writers and readers are taking action:

Today’s post looks at the contribution of another collection: A Country of Refuge. It is the 5th in a monthly series of blogs, part of my challenge to raise money for Freedom from Torture.

A Country of Refuge edited by Lucy Popescu 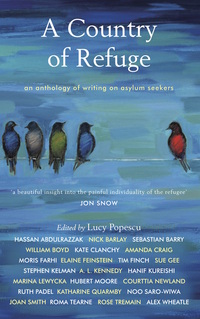 This book has a clear purpose as the editor Lucy Popescu says:

I wanted the writers to focus on the experiences of refugees and asylum seekers in an attempt to directly challenge the negative press and to cast a more positive light on a situation that, for many, is a living hell. (2)

In her introduction she draws attention to our long history of welcoming people seeking refuge: the Protestant Huguenots fleeing Catholic France in the C17th, the Irish escaping the famine in the C19th, some of the 14m displaced people in Europe after the Second World War, Hungarians in 1956. She could have mentioned the Jewish people escaping the pogroms of Europe in the C19th and Nazi policies in the 1930s, the Basque families in the 1930s …

Refugees, it seems, are always with us. The challenges of migration and movement of people around the world needs to be dealt with in a coordinated way. At the moment we in the UK are getting in the way of solving the problems raised by displacing peoples. The dominant discourse is that migration is a risk for our country.

In A Country of Refuge we can read short fiction, poems, memoir, essays, and a lecture to help us consider the experiences of refugees, of leaving one country to try and make a home and a new life in another.

Two examples from A Country of Refuge

The Dog-Shaped Hole in the Garden is a short story (or memoir, or perhaps a mixture) by Hassan Abdulrazzak. Hassan and his family had lived well in Baghdad, but found Saddam Hussein’s regime increasingly threatening because of their family connections. He was a young lad when they left to begin a period of travelling, eventually settling in New Malden in Surrey, where Hassan ached to own a dog. The story of the family’s assessment by the RSPCA lady is humorous but tells of the separation of cultures, the misunderstandings, the crossed wires, and the adaptations and one or two unexpected sacrifices the family had to make. He twice uses the striking phrase ‘falling out of Eden’ about their losses. Hassan Abdulrazzak writes plays.

One of AL Kennedy’s two contributions is a lecture from the European Literature Days Festival in Spitz, Austria in October 2015. She asks again this question, what is to be done and she gives us an answer.

[But it is also true that] failure of the arts, of artists, helps the cruel among us triumph and begin to oppress us all, even in relatively free societies, including – and perhaps initially – those who are communicators. (205)

She makes the argument for a more careful use of vocabulary, challenging David Cameron’s ‘swarm of people’, and suggesting that noticing the individual people, identifying them, describing them and the people close to them, telling their stories makes it less likely to see them as a swarm. When we are confronted with photographs and the name of Aylan Kurdi, the little boy photographed on the beach, drowned, he and his family become hard to fit into a faceless swarm.

AL Kennedy reminds us of the lack of depth in our public media even when it pays attention to stories, such as Aylan Kurdi’s:

The massive displacement of human beings from their homes all across Europe and the Middle East was rarely examined in anything like depth, or presented as being perhaps of more importance than a variety of celebrity talent competitions and soap operas. (208)

history teaches us that our greatest wrongs, crimes against humanity and genocide, arise from cultures where hatred has become part of the air the citizens breathe. (211)

By drawing attention to the activities of those who do not accept the culture of hatred, who provide aid, who march against unjust wars, through the best of the arts, she reminds us that we have the capacity to dream a better future.

A Staffordshire activist, Michaela Fyson, organised, through crowdfunding, for every MP to receive a copy of A Country of Refuge as a Christmas present in December 2016. Lord Dubs supported the event. Michaela said she was moved to this action because:

there are too many politicians referring to these groups of people as if they are animals – talking about them ‘swarming’, or needing their teeth checked like horses to see how old they are. That is what we need to change.

Lucy Popescu has a track record of exposing mistreatment of writers through her column in The Literary Review and her work with PEN. She is also a mentor with the Freedom from Torture Write to Life Group. (See Lost and Found and Souvenirs).

Lucy Popescu had found it impossible to attract a mainstream publisher to A Country of Refuge. It was published through crowdfunding, by Unbound. Writers describe the books they want to publish and readers are invited to support their publication.

A Country of Refuge Edited by Lucy Popescu. Published by Unbound in 2016. 231pp

I am raising money for Freedom from Torture, through sponsorship of a monthly walk and blogpost. This is the fifth post in the series. You can read more about it on the page called My Challenge (just click on the page title below the masthead). 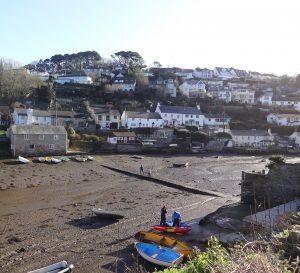 My companion was my brother Mont, and we walked in early January on a sparkling day on a circular walk that started inland, took in Noss Mayo and part of the SW Coast Path. The fifth walk was about 13km (8+ miles). 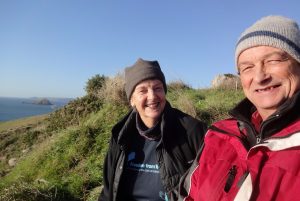 The sixth post about the challenge will appear on this blog …