The third in Peirene Press’s fairy tale series, The Empress and the Cake by Linda Stift is my final choice for August: #WITMonth, women in translation month. I’ve been enjoying picking up lots of ideas for reading women in translation. This is another intriguing novella from Europe, this time from Austria. 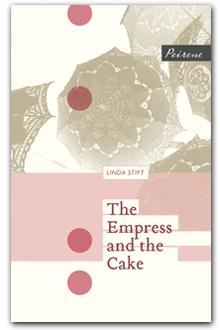 It begins with cakes, and the empress.

She was inspecting the pink and green custard slices, the glazed tarts and fancy meringues piled high in the window of the patisserie. Her dress touched the floor, with only the toes of her shoes poking out. The dress was black and woollen, and around her shoulders sat a black lace mantilla, whose dipped hem was tucked between her armpits. (13)

The anonymous narrator is inveigled by this older woman, Frau Hauenembs, into sharing a cake in her flat in Vienna. The narrator has a continuous battle with food and has not had cake for years, but she is also easily led. Frau Hauenembs’s flat is full of late Austro-Hungarian stuff, and looked after by Ida, an overweight but dedicated servant/housekeeper. Something strange is going on. Soon the narrator is ensnared by this odd couple and participates in a plot to steal a rabbit press (see later), then to replace the head of the assassin Lucheni, and then to steal a cocaine syringe that once belonged to the Empress Elisabeth. Gradually the narrator becomes more and more embroiled in Frau Hauenembs’s schemes and way of life, moving in with her, injecting her with cocaine, winning the Sissi lookalike competition, and even wearing housecoats as Frau Hauenembs requests. In the final paragraph it is clear that another victim is going to go through the same process. 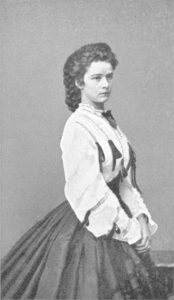 Photograph of Empress Elisabeth by Ludwig Angerer 1862 via WikiCommons

Frau Hauenembs is and isn’t the Empress Elisabeth. This is a fairy tale. In addition to the objects that are nefariously acquired, she adopts many of the behaviours of the original empress: she is tall, has a 16 inch waist, eats very little, keeps very slim, rarely sits down, has a dog and appropriately an imperious style with Ida and the narrator.

In Frau Hauenembs’s flat the narrator notices : … several pictures of the young Empress Elisabeth, including a small copy of the famous painting in which Elisabeth is dressed only in a nightie, her long hair tied in a thick knot in front of her chest. (18) 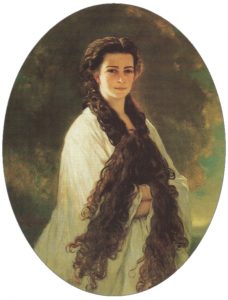 The story of the Empress Elisabeth is probably more familiar to Austrian readers. She was brought up in Bavaria, and married the Emperor Franz Josef at sixteen. He had been engaged to her sister. Despite her rather unconventional activities and the dominating behaviour of her mother-in-law, the couple appear to have been happy together until she was assassinated in 1898 by Luigi Lucheni in Switzerland. Known to her intimates as Sisi, (Sissi was the film name for her – see below) her childhood pet name, she frequently travelled on her own, was very active, went on long hikes, was fascinated by circus people, and passionate about Hungary. She was devastated by the suicide of her son Rudolf, at Mayerling. 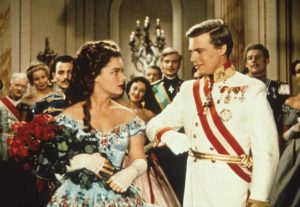 If any of this sounds familiar, it may be that you have seen one of the three films in the Sissi series, starring Romy Schneider, made in the 1950s.

Food, and Viennese patisserie in particular appear, throughout the novel. The narrator is seduced with them, Ida is greedy for them, and Frau Hauenembs cannot resist buying them. The prize at the Sissi look-alike competition is the winner’s weight in praline. The trio frequently have lavish picnics, carried by Ida, picked at by Frau Hauenembs, futilely resisted by the narrator.

Frau Hauenembs’s protracted beauty rituals mimic the Empress’s. The duck press is for squeezing out juices from the dead bird, to prepare a health drink. Control of eating, body weight and shape are frequent themes of this novella; how much they matter, how much they are under the control of the eater, what they look like in clothes, what they weigh …

The book also offers an exploration of the way the mind creates its own realities and – quite often – deludes us into believing that we control what is actually controlling us. [From the publisher, Meike Ziervogel]

The original German title of the novel is Stierhunger, which translates as bulimia nervosa. The prose is appropriately physical in response to all this bodily fixation. The descriptions of the means by which the narrator attempts to hide her bulimia are especially vivid.

It may be a fairy tale, but the realities of the lives of Elisabeth and her servant, of Frau Hauenembs, Ida and the narrator are far from romantic. No saccharine here, but there is lots of toxic sugar.

The Empress and the Cake by Linda Stift, published in 2007 as Stierhunger, and by Peirene Press in 2016. Translated from the German by Jamie Bulloch. 184 pp

Books in Translation on this blog looks at the small number of translations, especially by women published in this country.

Tales from the Vienna Streets on this blog in July 2013.

The Beauty Rituals of C19th Empress Elisabeth of Austria on Mimimatthew’s blog. Mind-blowing!