The reality of crossing the Mediterranean in a small boat, putting your life in the hands of the smugglers, evading the barriers that Europe has set up to keep you out, the cost to your spirit as well as your savings, the anxiety of your family as they wait for news – these things are exposed in an important piece of journalism undertaken by a German reporter.

Crossing the Sea by Wolfgang Bauer is a story of anticipation, fear, boredom, trust, doubt, more fear and possible death. The journey is so terrible it can only be undertaken because of the even worse situation from which people are fleeing. This is the truth of the movement of peoples, and especially those who have been displaced by Syria’s on-going civil war. 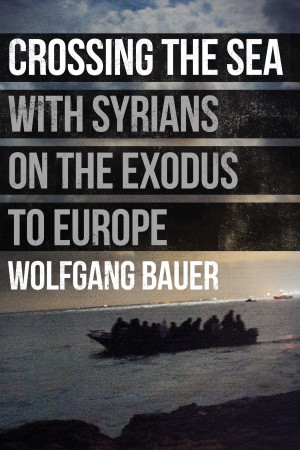 Wolfgang Bauer is a reporter with the German periodical Die Zeit, and together with photographer Stanislav Krupar, they arranged to travel with Syrian refugees from Cairo to Europe, to gain entry through Italy. They disguised themselves as Syrians, and travelled with Amar who acted as interpreter for them as well as being the subject of the story they wanted to tell. The account in Die Zeit won the Prix Bayeux-Calvados for War Correspondents for Wolfgang Bauer, the second time he has won that award.

The two men experienced all the delays, scams, being held hostage, extortion, cruelty, days of inactivity and so forth that is the life of the refugee trying to cross the Mediterranean. Writing about the situation in April 2014, Bauer explains the business of smuggling.

In Egypt, people smuggling has a structure not dissimilar to the tourism industry. Sales points with ‘agents’ are spread throughout the country. These agents assure their customers that they work with only the best smugglers, when in reality they have contracts with just a few. The crossing costs around three thousand dollars. Cheaper and more expensive services are available, but ultimately all travel classes end up in the same boat. The agent receives a commission of about three hundred dollars. This is kept by a middleman until the passenger’s safe arrival in Italy. The sales agents – well most of them – care about their reputation. Their livelihood depends on recommendations from people they have successfully helped across the water. (18)

The two journalists and Amar find an agent, and after many days of waiting, they do get on a boat, but almost immediately are pushed overboard by the smugglers onto Nelson Island near the Alexandrian port and are arrested along with the rest of their group. Being foreign nationals they are deported to Europe, ironically making quick and easy passage into that part of the world their group was trying to reach.

The rest of the book follows other members of the group as they continue to try to cross into Europe. Some have family to join in Sweden. Amar, their main contact point, spends days, weeks, months waiting and considering the schemes of various agents and trying a few. Eventually he succeeds by a long and expensive trip that takes him via Tanzania and Zambia into Europe. In the English edition we find that his family have been able to join him legally.

Two brothers, Alaa and Hussan, set out again on the journey by boat, or rather, by more than one boat. The deal-making between smugglers’ organisations and the captains, continues. Even the passengers join in to influence with more money the delays and shortages of supplies they experience as they make their dangerous, slow and erratic crossing. They are rescued as their boat is beginning to collapse and they are worried about why they are not near the Italian coast. They are saved by the Italian Navy, who happen to be in the area because they were fishing survivors and bodies out of the water the previous day, casualties of another voyage gone badly wrong. This account is gripping as it illustrates what can happen day by day to the people on the boats.

Written in a direct style, with the experiences of different people vividly retold, enhanced by Stanislav Krupar’s photographs, our understanding is deepened of how driven these people are. Bauer also includes a passionate indictment of EU policy towards migrants and of inactivity in the war in Syria. ‘Have mercy’ he concludes. 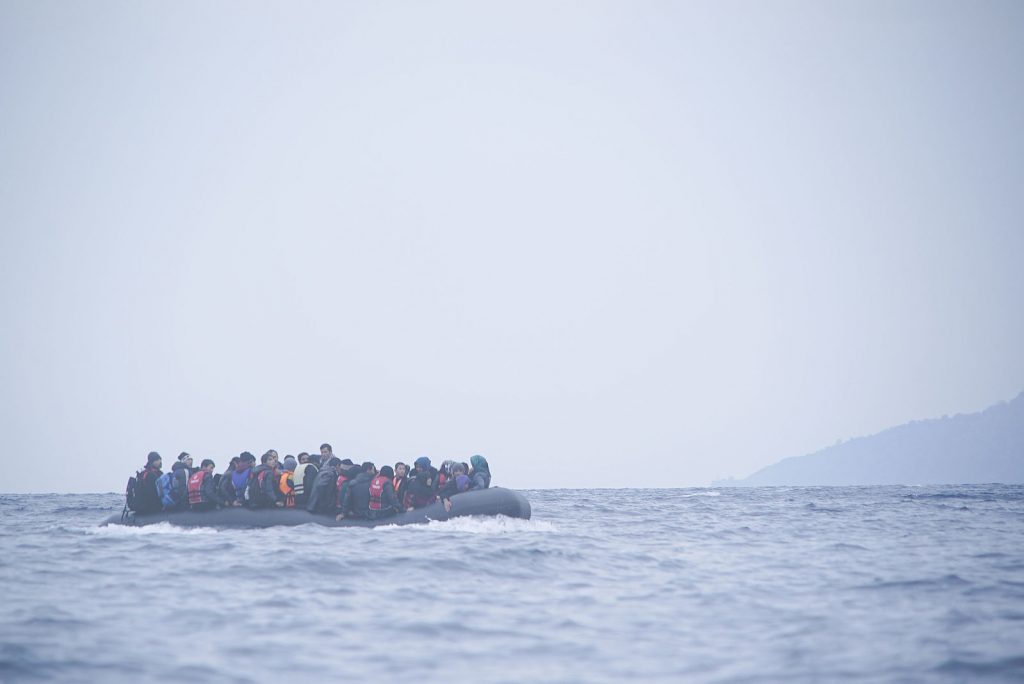 Refugees on a boat crossing the Mediterranean Sea, heading from Turkish coast to the northeastern Greek island of Lesbos, 29 January 2016. Mstyslav Chernov/Unframe via WikiCommons

More and more people are crossing the Mediterranean into Europe, and European countries are making more and more efforts to keep them out. Because of the illegal nature of the journey accuracy in statistics is hard to gauge. But what we do know is startling enough.

In 2016 362,753 people are known to have made the voyage – which is about 1000 every day, although some days, of course, are less suitable for the journey than others. 55,374 people have made the crossing so far in 2017. Among all refugees to Europe last year (not all by sea) 100,00 were children, and of these 33,000 were unaccompanied. Most of the unaccompanied children were male. 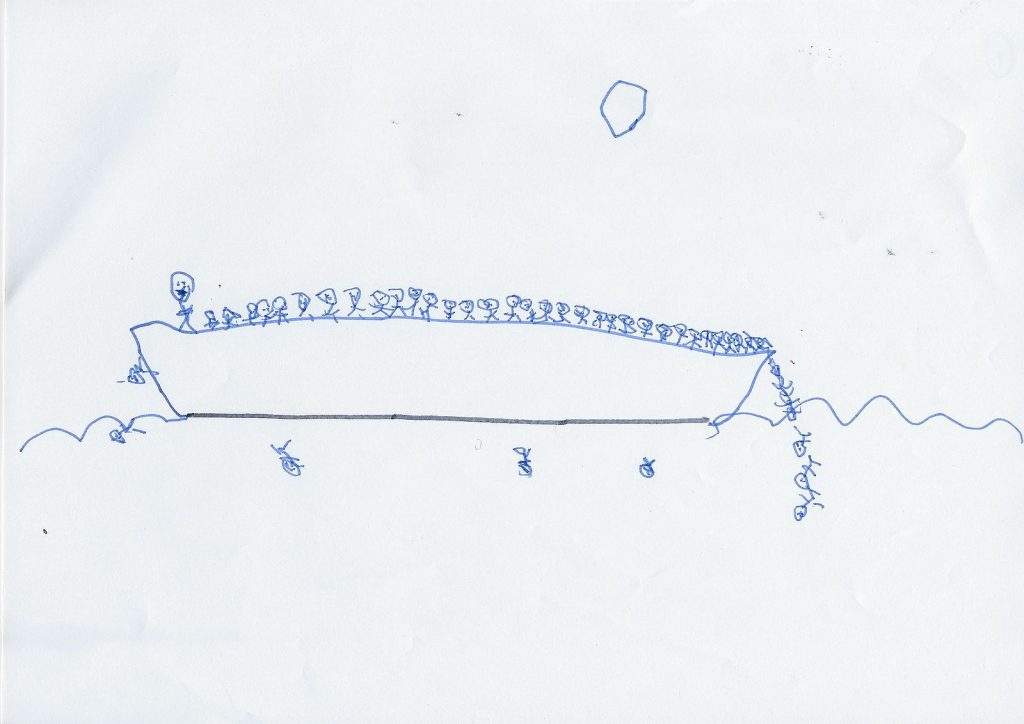 Between January and 16th May 2017 an estimated 1364 people have died or gone missing as they made the attempt to cross. One person in every 35 who crosses from Libya to Italy has perished.

5 million people have fled from Syria since the war began in 2011. There are many other countries from which people are fleeing.

I have taken these figures from the data portal of the UNHCR.

I have reviewed several accounts of crossings and movements of peoples in this series of posts. It amazes me that European countries cannot find better solutions to this unstoppable movement of peoples.

Crossing the Sea with Syrians on the Exodus to Europe by Wolfgang Bauer, first published in German in 2014. English translation with update published by And Other Stories in 2016. 122pp

Translated from the German by Sarah Pybus. Photographs by Stanislav Krupar.

A note on the publisher: And Other Stories is a Community Interest Company with a not for profit ethic. They publish literary works supported in part by subscriptions. Find out more at their website here.

I have been raising money for Freedom from Torture, through sponsorship of a monthly walk and blogpost. This is the eighth post in the series and my last walk. You can read more about the challenge on the page called My Challenge (click on the page title below the masthead).

At the time of my final walk I have 91% of my target, need just £141.67 to reach it without gift aid. With gift aid I have already exceeded it, and have raised £1779.58. Donations are still acceptable. 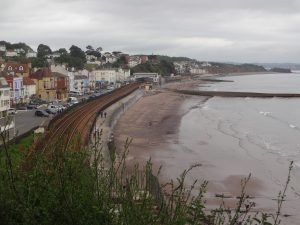 For this walk I returned to the sea, taking the coast path from Dawlish Warren passed Dawlish on the south Devon Coast and back. The sea is a theme in this and other posts in the challenge series. The sea promises much and promotes thoughtfulness, this day of the Manchester bombing that had just taken place. My train journeys to London pass this way. It can also be dangerous. The railway line here was undermined by the sea in the winter storms of 2013/14. And the coast is still being reinforced. At Dawlish Warren there were more hard hats than sun hats. This walk was about 9 km (5.7 miles). 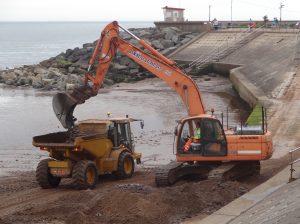 The final post about the challenge will appear on this blog …