Travels with Robert Louis Stevenson in the Cevennes

In the autumn of 1878 Robert Louis Stevenson set off with his donkey Modestine, spending 12 days travelling in the French region of the Cevennes. This is a mountainous area north of Montpelier. They covered 120 miles together, travelling south from Le Monastier (near Le Puy) to St Jean du Gard.

Last week (May 2016) I travelled, in much more luxury but also on foot, from Ganges to Millau. This route took us further south, crossing from East to West. My companions were 13 walkers, guided by a professional tour leader, looked after by a wonderful tour manager. No donkeys, but a lonely cow, with bell joined us for an hour one day.

RLS was suffering from a broken heart when he set out. He was 27 years old, already a veteran traveller, and destined to go on travelling, ending his life in Samoa. He came from Scotland, son of a lighthouse builder.

RLS was also a writer, and most people first meet him as the author of Treasure Island or Kidnapped. [Pause for people to mutter Aaah Jim lad! And Black Spot!] He published his account of his trip with Modestine in the year after his journey: Travels with a Donkey in the Cevennes. He gave no reason for his journey, being a devotee of travel for its own sake.

Why any one should desire to visit either Luc or Cheylard is more than my much-inventing spirit can suppose. For my part, I travel not to go anywhere, but to go. I travel for travel’s sake. The great affair is to move; to feel the needs and hitches of our life more nearly; to come down off this feather bed of civilisation, and find the globe granite underfoot and strewn with cutting flints. Alas, as we get up in life, and are more preoccupied by our affairs, even a holiday is a thing that must be worked for. To hold a pack upon a pack-saddle against a gale out of the freezing north is no high industry, but it is one that serves to occupy and compose the mind. And when the present is so exacting, who can annoy himself about the future? (12) 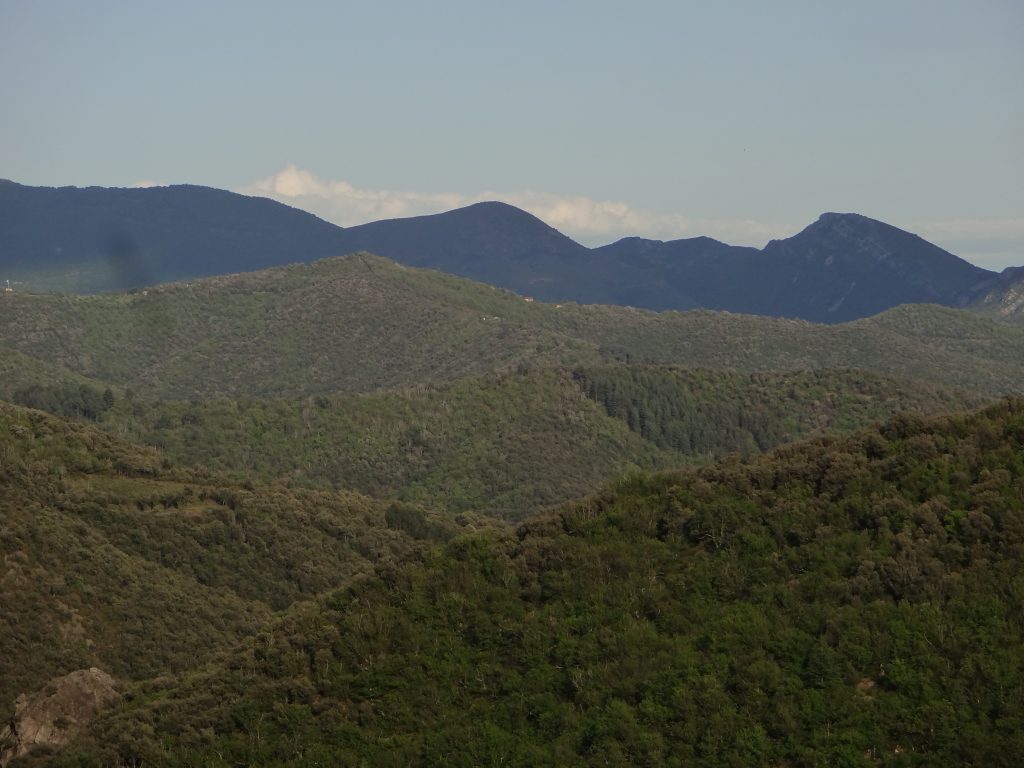 RLS’s present was very exacting and he experienced many ‘needs and hitches’, not least in his relationship with Modestine. Most of the time he was on his own (except for the donkey) and at night, if there was no convenient auberge, he slept under the stars. He spent one night in a Trappist monastery. Trappists take a vow of silence. As he approached, with some trepidation, he met Father Apollinaris near the monastery, Our Lady of the Snows. They walked and conversed together.

‘I must not speak to you down there,’ he said. ‘Ask for the Brother Porter, and all will be well. But try to see me as you go out again through the wood, where I may speak to you. I am charmed to have made your acquaintance.’

And then suddenly raising his arms, flapping his fingers, and crying out twice, ‘I must not speak, I must not speak!’ he ran away in front of me, and disappeared into the monastery door.

I own that this ghastly eccentricity went a good way to revive my terrors. (18) 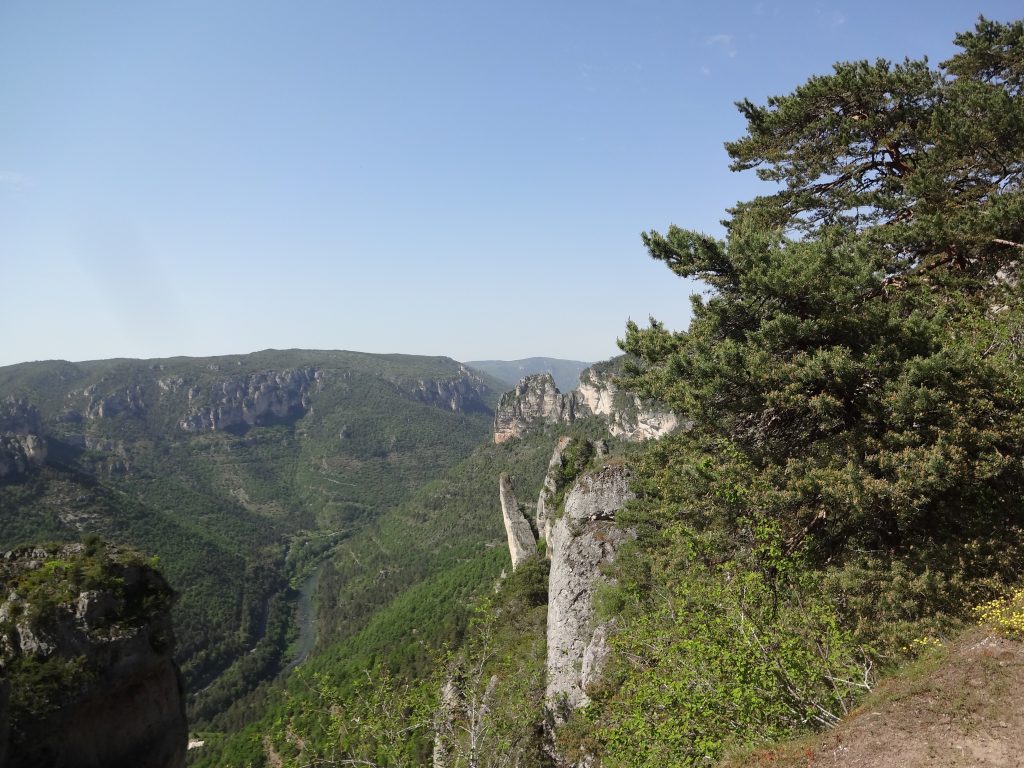 He describes the details of his adventures with wry good humour. More than once he sleeps outside, rarely disturbed by people in this remote region. One night he leaves the village of Bleymard and camps among the pines. In the night he awakes. 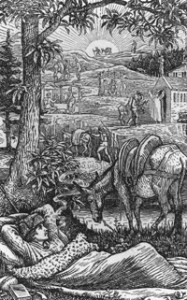 The stars were clear, coloured, and jewel-like, but not frosty. A faint silvery vapour stood for the Milky Way. All around me the black fir-points stood upright and stock-still. By the whiteness of the pack-saddle I could see Modestine walking around and around at the length of her tether; I could hear her steadily munching at the sward; but there was not another sound save the indescribable quiet talk of the runnel over the stones. I lay lazily smoking and studying the colour of the sky, as we call the void of space, from where it showed a reddish grey behind the pines to where it showed a glossy blue-black between the stars. …

As I thus lay, between content and longing, a faint noise stole towards me through the pines. I thought, at first, it was the crowing of cocks or the barking of dogs at some very distant farm; but steadily and gradually it took articulate shape in my ears, until I became aware that a passenger was going by upon the high-road in the valley, and singing loudly as he went. There was more of goodwill than grace in his performance; but he trolled with ample lungs; and the sound of his voice took hold upon the hillside and set the air shaking in the leafy glens. (55/56)

It struck me that RLS does not report those things that occupy most walkers: feet, especially any blisters, tired legs or knees, whether the weather will hold, the next meal, all matters physical. Rather he focuses on Modestine’s limitations, which are great. Some ascents are too steep for her. Sometimes she refuses to walk. She meets a fellow donkey and wants to socialise. RLS has to learn how to encourage, entreat and provoke Modestine to carry his luggage: a switch, a goad, whistling, and pulling. It is a constant source of anxiety to him that he must treat this animal in ways he would rather avoid. Eventually, after 12 days, they reach St Germain de Calberte, but the donkey’s physical state means she can’t continue to Alais (today called Ales) as intended. So he sells her and she is gone before he realises that he will miss her, grieve for her.

He tells us about his struggles with Modestine, his luggage, finding the way, meeting various characters, the history of the region (known for being a stronghold of Protestants in a bloody struggle in the previous century) and innumerable conversations about religion. ßHe notes the telegraph wires, the railway, surveyors preparing for new tracks. But other signs of mechanisation are few. 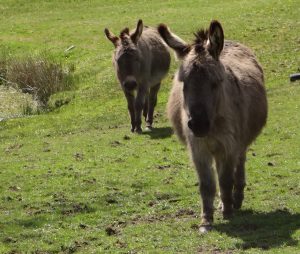 His generosity of spirit, his belief in getting along with everyone, in the pleasures of travel for the adventures it brings, and his reluctance to goad Modestine, these are the charming characteristics of this account.

My journey did not coincide with RLS and Modestine’s. I went with no purpose but to enjoy the walking, the countryside, the company, the food and wine. I began to understand Modestine’s reluctance as we struggled up steep and rocky paths, and descended more of the same. Some tracks were forbidden to car and bikes, but there was no sign of any donkeys (except perhaps that pile of poo). 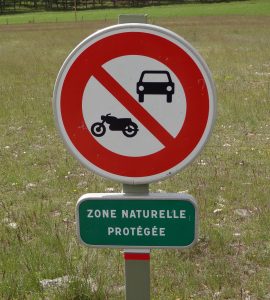 Our journey lay over the high plateaux, in May awash with numberless wild flowers, overseen by larks and vultures. Our views were spectacular, the pine woods quiet and fragrant, our way up the slopes serenaded by nightingales.

Travels with a Donkey in the Cevennes by Robert Louis Stevenson, first published in 1879. The edition I used is published by John Beaufoy Publishing ltd, Stanfords Travel Classics. 95pp

There is a useful website on Robert Louis Stevenson here.

The next post on Bookword will look at other Cevennes-related reading.