We have reached the 1980s in the Decades Project. This month’s choice is a prize-winning novel. I read Hotel Du Lac by Anita Brookner when it was first published in 1984 and went on to read most of Anita Brookner’s 24 novels, She died last year. Hotel Du Lac explores the question asked by the main character, Edith Hope, ‘what behaviour most becomes a woman’? 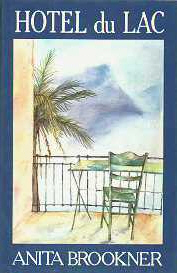 In this novel marriage is not the answer for Edith Hope. We can note that her circumstances are very different from Lily Bart who featured in the first novel in the decade project: The House of Mirth. Lily had no means of support unless she married, but Edith in Hotel Du Lac has choices, including marriage, which she rejects.

Edith Hope, a writer of romantic fiction, has been dispatched by her friends to the hotel in Switzerland. Her friends want her to reflect on her disgraceful behaviour and come back more grown up and responsible. For her own part she is determined not to change, but to sit out her exile writing her next novel. She is 39, it is the end of the season and there are only a few guests left in the hotel.

In the hotel she meets Mrs Pusey and her daughter Jennifer, both of whom trade on good looks and extreme wealth to indulge their selfishness. We know this from their shopping expeditions and the attention they demand from everyone. Then there is Monica who is about Edith’s age, and a very tall and willowy woman with an annoying dog. She is at the hotel to sort out her eating problems for she must make herself fit to conceive the heir her husband wishes for. Old Madame de Bonneuil is parked in the hotel during the season for the convenience of her son’s wife, who does not want the deaf old lady at home. The old lady bears this exile in silence, although he is the only thing of interest in her life.

Into this mix of people comes Phillip Neville, a perspicacious man, who sees in Edith the opportunity to acquire a wife so that he is not embarrassed by the loss of his previous wife. His proposal is about as unacceptable as Mr Darcy’s first proposal to Elizabeth Bennet in Pride and Prejudice. It’s all about him and his knowledge that marriage provides what society thinks women want. There is an irony for Edith writes about traditional romantic ideas in her novels.

It emerges that before she arrived at the hotel, Edith had accepted a proposal from a very kind, gentle but very boring man, and whom she lets down at the last minute.

Despite these examples and choices Edith returns to the secret love affair that has dominated her life for years. She has understood more about the choices available to women, and although changed by her time at the hotel she chooses to return. 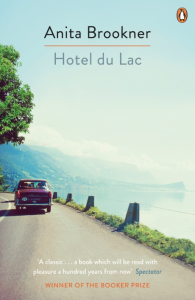 One of the strengths of Anita Brookner’s writing is her description of places. Here is the opening:

From the window all that could be seen was a receding area of grey. It was to be supposed that beyond the grey garden, which seemed to sprout nothing but the stiffish leaves of some unfamiliar plant, lay the vast grey lake, spreading like an anaesthetic towards the invisible further shore, and beyond that, in imagination only, yet verified by the brochure, the peak of Dent d’Oche, on which snow might already be slightly and silently falling. (7)

She has complete control of that very long second sentence, and follows it with another even longer sentence that describes the small town in which the hotel is to be found. A few paragraphs further on Edith, newly arrived at the hotel, contemplates her room.

Turning her back on the toneless expanse beyond the window, she contemplated the room, which was the colour of over-cooked veal: veal-coloured carpet and curtains, high, narrow bed with veal-coloured counterpane, small austere table with a correct chair placed tightly underneath it, a narrow, costive wardrobe, and, at a very great height above her head, a tiny brass chandelier, which, she knew, would eventually twinkle drearily with eight weak bulbs. (9)

Anita Brookner is famous for her controlled prose, but she includes humour and daring, for example when she in describes the bedroom as veal coloured.

She also sketches characters with deftness, so that even if they are mysterious, or something is not yet explained, one sees the individual emerge. Here is Madame de Bonneuil taking tea in the salon.

The pug-faced lady was eating grimly, her legs wide apart, crumbs falling unnoticed on to her lap. (17)

Again humour lurks underneath Anita Brookner’s sentences. Frequently it is her choice of words: the slightly and silently falling snow, the costive wardrobe, the veal, eating grimly. And here is Monica with the coffee pot: she poured it out largely and carelessly. (70)

There are advantages to containing the action of a novel within a hotel, and it is a device used by other writers. I blogged about this in a post called Five Novels set in Hotels: here.

A novel about the single woman

Edith Hope (novelists get to decide the names of their characters) chooses the single life, not because she is desperate – she has rejected two offers of marriage. It is because she is honest and this novel celebrates the quiet courage of the single woman, as do so many of Anita’s Brookner’s novels. For more on this idea see the appreciation by Christina Patterson: Anita Brookner’s subversive message – the courage of the single life deserves respect.

I will be reading The Shipping News by E Annie Proulx (published in 1993) in October for the decade of the 1980s. Please make suggestions for subsequent decades, 2000s (November) and 2010s (December).