Mary Shelley was the daughter of Mary Wollstonecraft and William Godwin, radical writers of the late 18th Century. She ran away with and later married a radical from her own generation, Percy Bysshe Shelley. She spent time in the company of Lord Byron, and wrote her most famous novel trapped by the rain in his Italian villa. These associations are significant, but Mary Shelley made her own contribution to cultural life, not least through the novel Frankenstein.

The tragedy of Mary’s childhood was the death of her mother from puerperal fever within days of her birth in 1797. Her father was devastated. Mary grew up motherless. Godwin remarried, partly to provide a mother for baby Mary and her half-sister Fanny Imlay (Mary Wollstonecraft’s older illegitimate child). Her stepmother provided her with stepsiblings, including Jane, later Claire, but very little affection. 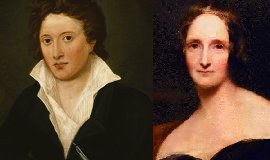 Mary spent intellectually formative time in Dundee with friends of her father’s, but on meeting and falling for Shelley in 1814, ran away with him and Claire to France. Shelley was already married to Harriet who was pregnant and later committed suicide. Her half-sister Fanny Imlay also committed suicide at this time. Mary married Shelley on Harriet’s death. She and Shelley already had a son and were to go and have three more children. Only one survived.

In 1816 the Shelleys and Claire returned to Europe, staying in Geneva near Byron. Claire had already started a liaison with Byron, but he soon tired of her. It was here that Mary had her first ideas for Frankenstein.

Over the next few years the Shelleys lived and travelled in Europe, where three of Mary’s children and Claire’s daughter by Byron all died. Shelley was drowned in June 1822. It is not surprising that Mary suffered from depression with her life defined by the death of many of her most important people.

Mary supported herself and her remaining son until she died in February 1851 through her writing. She wrote travel books (as did her mother) as well as six more novels, at least 50 biographical essays for an encyclopaedia and edited her husband’s work for publication.

Of her works, only Frankenstein has remained well known.

In April 1816 Mount Tambora erupted in the Dutch East Indies – present-day Indonesia. It was the most violent eruption ever recorded. The effect of the huge volumes spewed from the volcano was to change weather patterns all over the world for at least 12 months. In Europe the dreadful, wet summer resulted in failed harvests, and the high prices of grain brought starvation and political unrest.

In Geneva it rained day after day and the Romantic poets’ party was confined to their houses. It was here that someone, Byron it seems, announced ‘we will each write a ghost story’. 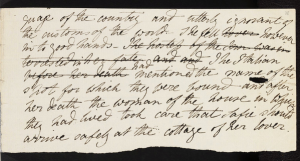 Mary took time to find her inspiration, and it was the conversations that the party were having about life and its principles, and specifically about galvanism, that led Mary to form her ideas. After one such conversation she records

When I placed my head on my pillow, I did not sleep, nor could I be said to think. My imagination, unbidden possessed and guided me, gifting the successive images that arose in my mind with a vividness far beyond the usual bounds of reverie. (quoted in the Introduction xxi)

It was a dreary night of November, that I beheld the accomplishment of my toils. (58)

In the revisions the sentence appears at the start of Chapter V of Book 1.

The novel reveals her extensive self-taught understanding of ‘natural philosophy’ as physics was called at the time. She also knew the classics, and read the new knowledge being revealed by enlightenment scholars. Mary’s most famous novel is not so much a ghost story as a gothic science fiction horror story. 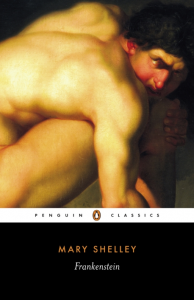 Not surprisingly women cannot be forgiven for so much transgression nor allowed to achieve intellectual status. Some commentators have suggested that Frankenstein was actually Shelley’s work. Although he apparently provided some editorial assistance, this was Mary’s.

More on Frankenstein in the next post, looking at the Royal Ballet’s production of Frankenstein, by Liam Scarlett – a world premier. 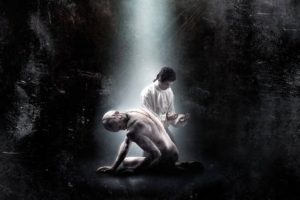 Frankenstein at the Royal Opera House

Mary Wollstonecraft and her daughter

Both women challenged conventional acceptable behaviour by women, refusing to accept that women should be treated differently. Both had unmarried sexual relationships with men, and both had illegitimate children.

Both wrote fiction and travel writing, but Mary Shelley did not publish polemic books such as the Vindication of the Rights of Woman. Both women married radical men. Both suffered for their love, Mary Wollstonecraft was abandoned, more or less, by Imlay, despite their baby Fanny. Shelley seems to have indulged himself wherever he chose, including with Claire (Mary’s step-sister, who accompanied them on their travels). Claire is known to have had a child by Byron. It is not surprising that the group were known as the ‘league of incest’. The men of the circle seem to have behaved like those men of the 1970s who exploited women’s new sexual freedoms, whatever the cost to their partners.

Both women were ostracised for their sexual activities. Both spent time abroad, Mary Wollstonecraft in France during the revolution and Mary Shelley in Europe with Shelley until his death.

Despite the tragedies in both their lives and the attitudes of their times, both women pursued education, radical ideas and have influenced ideas for more than 200 years.

Frankenstein or The Modern Prometheus by Mary Shelley. I used the Penguin Classics revised edition 1992, edited with an introduction by Maurice Hindle.

Mary Wollstonecraft, a Romantic Outlaw from this blog in March, looking at Charlotte Gordon’s biography of the two Marys.