Like a Mule Bringing Ice Cream to the Sun is the longest title so far in the Older Women in fiction series. The title is not the only outstanding feature of this book. Among the pleasures of the series are researching books to read, and following up recommendations by other readers. Recent posts have taken me out of the usual Western literary tradition and into other cultures. Two Old Women draws directly on Alaskan traditional stories from the Yukon, predating European arrivals. The Woman next Door is set in modern day South Africa. For the 32nd novel in the series Sarah Ladipo Manyika brings you a woman of 75, living in San Francisco and of Nigerian origin. 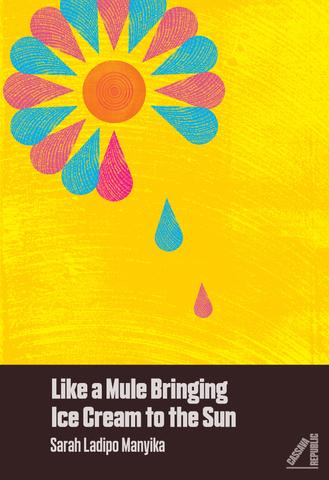 Our first impressions of Morayo da Silva are from her own narration. Her voice begins the novel with these words.

The place where I live is ancient. ‘Old but sturdy,’ our landlady tells us. (1)

Later she tells us

For I, like the building am ancient. Ancient if you are going by Nigerian standards, where I’ve outfoxed the female life expectancy by nearly two decades. (2)

Here is a nice set of contradictions. By African standards, buildings in San Francisco are not ancient. Nor yet by European standards. Yet in the rich US, life expectancy has surpassed African norms. In her mail that morning she receives a notification that she must have medical and sight tests to verify her fitness to drive, now she is turning 75. She is aware that her sight is failing. We also learn that she is a flamboyant dresser, has travelled widely and is well educated.

She was an English Professor but these days she arranges her books not alphabetically but according to which characters should be talking to each other.

That’s why Heart of Darkness is next to Le Regard du Roi, and Wide Sargasso Sea sits directly above Jane Eyre. The latter used to sit next to each other but then I thought it best to redress the old colonial imbalance and give Rhys the upper hand – upper shelf. (23)

This is eccentric, but has a logic. Books are treasured and she is upset when a well-meaning friend causes some of her books to be thrown away.

As she walks on the streets of San Francisco we are shown different aspects of Morayo by other characters. We see her talking with a Palestinian stall holder, a gay man who pays her a compliment, a homeless girl, and we see that she notices these things, loves the city that is so friendly, loves to stand out in it. Later she meets and talks with more residents of the American melting pot.

Morayo has a strongly independent spirit, but when she falls and is injured she has to go to a care home to recuperate. The staff find her independence threatening, but she makes friends with the Guyanese husband of a resident who visits every day, and with the substitute chef called Toussaint whose food is tastier than the regular diet.

And when she returns home she accepts her physical limitations but is defiant in her response. Not for her the acceptable behaviour of aging women with failing sight. She has a last fast drive in her beloved old Porsche, Buttercup.

Reading Like a Mule Bringing Ice Cream to the Sun

The changes of point of view take a little getting used to. But the writing is direct and immediate and the main character so full of life that it is easy to enjoy. These different perspectives confirm the reader’s impression of a great character, and also provide insights into her interactions.

There is not much story to this short novel, but it moves along as people meet and talk which add up to small and important stories. The reader also learns more about Morayo’s rich past. Like a Mule is less a story, more a portrait.

The novel’s title is the last line of a poem, and seems to me to speak of those who take life, despite its obstacles and challenges and push on being alive. And Morayo does in her 75th year. You can read the poem by Mary Ruefle, Donkey On or see and hear the poet reading it on You Tube.

The author was born in 1968 and was raised in Nigeria. At one point in her life she taught English Literature in San Francisco State University. Her previous novel was In Dependence (2008). She has written about older people in fiction in an essay called For the Love of Older Characters in Good Books.

Like a Mule Bringing Ice Cream to the Sun by Sarah Ladipo Manyika, published by Cassava Republic in 2016. 118pp. It was shortlisted for the Goldsmith’s Prize in 2016.

Penelope Lively How it All Began

Yewande Omotoso The Woman Next Door

Please make suggestions for further fiction for this series.