Tag Archives: Remember you must die

So how would you respond to being told to remember that you must die? With anger, acceptance, agreement, curiosity about the speaker, avoidance, denial? The characters in Memento Mori by Muriel Spark react in ways that illuminate their lives and characters. They each receive a phone call. A voice merely says

Remember you must die.

With her sharp wit, sparkling style and genial good humour Muriel Spark leads us through the final months of her many characters, drawing less attention to the mystery of who makes the calls and becoming more concerned with their reactions to the calls.

This is my first contribution to #ReadingMuriel2018, hosted by Heavenali. I look forward to reading more of Muriel Spark’s work in this anniversary year of her birth.

The story of Memento Mori 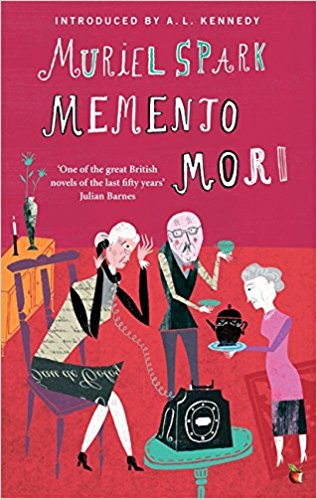 This novel is short, bizarre, almost macabre. Published in 1959 and set in the ‘50s in and around London, the story concerns a connected group of older people. Dame Lettie Colston (a philanthropist who behaves with no charity) has received phone calls commanding her – ‘Remember you must die’. Lettie does not wish to remember, and has reported the calls to the police. Her brother, Godfrey, says the caller must be a maniac. He is fairly detached about it until he receives his own call. His wife Charmian, a novelist, accepts the reminder. Other characters also receive the call: Alec Warner, who is researching gerontology, taking copious notes about the effects of aging on people, including himself; the poet, Percy Mannering, who can do nothing without being loud and shouty (including spending a windfall on an excessively long telegram about another poet).

In this novel the characters are living in their 70+ years as they did when they were younger – using and deceiving other people, being cruel, blaming, lying to and exploiting each other. They pursue vendettas and inheritances, try to get even, settle old scores, behave as badly as ever.

Miss Taylor, once Charmian Colston’s maid, now a resident of a hospital ward for old women (referred to as Grannies), has a theory about the calls. It will do.

‘In my belief,’ she said, ‘the author of the anonymous telephone calls is Death himself, as you might say. I don’t see, Dame Lettie, what you can do about it. If you don’t remember death, Death reminds you to do so. And if you can’t cope with the facts the next best thing is to go away for a holiday.’ (179)

Those that live as though they will never die are the most troubled by the phone calls. Every character is at the mercy of the physical manifesdtations of aging. Guy Leet, writing his memoirs, for example, is finding it hard going.

The laboriousness of the task resided in the physical, not the mental effort. His fingers worked slowly, clutched round the large barrel of his fountain pen … (185)

This is not a pleasant group of people. Miss Pettigrew is an evil, blackmailer and yet she achieves her goal of inheriting money through foul means. She has a stroke so is not able to enjoy it for long. In the end they all die, as we all do. We are reminded of this in the final pages, which list the fate of them all. 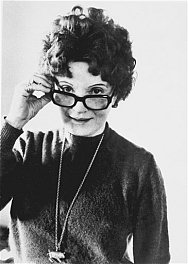 This was Muriel Spark’s third novel of the 22 she wrote. Her novels are very readable, mostly fairly short and written in a sharp style, but with depth. The focus of this novel could not be clearer, yet it is not preachy. We must acknowledge that we will die, not live as we did in our youth, when we could afford to image an endless future. Or go on holiday.

In a recent essay on her work in the Guardian Review Ali Smith quotes Muriel Spark and explains her wide reach and appeal.

Above all: “It is my first aim always to give pleasure.” This is how she described her raison d’etre as a writer, and to me she is one of the 20th-century writers most vitally, joyfully, seriously philosophically, aesthetically and politically engaged with the living materials of history, and with her own time, in a way that gives back to our time, and that will always give to readers no matter what time they’re embroiled in, whenever they read her.

Ali Smith also quotes her poem Author’s Ghosts, in which the ghosts creep back to update their texts. This is to notice that some books remain relevant. And Muriel Spark’s books have something important to say in our time, even if written more than 50 years ago, as Memento Mori. While we may live longer, on the whole, we see less of death in everyday life and we should all remember we will die.

I recently was given a copy of Jacob’s Room is full of Books by Susan Hill. She too admired Muriel Spark and makes several references to her style. Here’s an example of her wit, observation and lightness of touch from this novel. She is reporting the conversation of the Grannies in Miss Taylor’s ward and inserts this little grenade.

Mrs Reewes-Duncan, who claimed to have lived in a bungalow in former days, addressed Miss Valvona. (36)

I notice that both Ali Smith and Susan Hill are rereaders and this was my second reading of Memento Mori. I have mostly avoided rereading on the grounds that there is so much new to fill my reading hours, and I didn’t want to miss it. But now I am thinking that I don’t want to miss the pleasures that come with rereading. Expect more.

For March/April in this readalong I can choose between The Girls of Slender Means and The Mandelbaum Gate. I have copies of both. One would be a reread the other a first look. Now which to choose?