A group of people walk in the manner of the Canterbury Tales. As they walk they tell their stories. The journey, in July 2017, started at Runnymede, where the Magna Carta was signed, and ended in Westminster, the seat of parliamentary democracy.

This is a collection of stories about abuses of Human Rights. The stories are about refugees and indefinite detention.

Real as the walk is, and acutely real as are the experiences presented in the tales, there is a significant sense in which Refugee Tales is also symbolic. What it aims to do, as it crosses the landscape, is to open up a space: a space in which the stories of people who have been detained can be told and heard in a respectful manner. It is out of such a space, as the project imagines, that new forms of language and solidarity can emerge. (115) 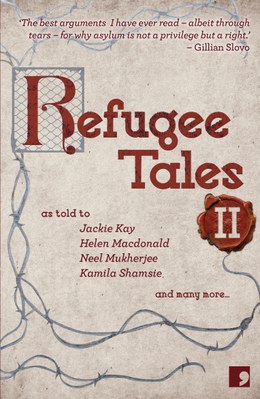 Last year I read the first volume of Refugee Tales as part of my challenge to walk and blog about refugees, raising money for Freedom from Torture. Since the first walk and publication of the first tales, indefinite detention has become more prevalent. It the focus of the second book of tales, collected for the Gatwick Detainees Welfare Group.

These are not exceptional stories, or only in the sense that they have been told to accomplished writers and written down and presented in a collection. Here are the tales of 11 people whose lives are bound up with the UK immigration practices: the student, lover, abandoned person, walker, witness, barrister, voluntary returner, support worker, soldier, mother and smuggled person.

Reading these stories made me ashamed to be a resident in a country where the policy is so mean-spirited and hostile, so lacking in generosity and humanity, which strips away peoples’ sense of self, their dignity and trust. Furthermore temporary indefinite detention can be seen as an abuse of Human Rights as these stories illustrate.

Everyone has the right to recognition everywhere as a person before the law. (Article 6 of the Universal Declaration of Human Rights, 1948).

No one shall be subjected to arbitrary arrest, detention or exile. (Article 9 of the Universal Declaration of Human Rights, 1948).

And there are stories of people doing good, doing the right thing, offering assistance and kindness where it is needed. I know who I’d like to be, not on the side of creating ‘here in Britain a really hostile environment for illegal migration’ (words of the then Home Secretary, Theresa May, in 2012). Rather I would support a policy that honours our commitments to the Universal Declaration of Human Rights and our obligations towards refugees.

From the voluntary returner’s tale:

That I was here.

From the support worker’s tale:

It means being in but not of the world. Like a shade from the world below, you’re condemned to float outside, looking in on everything you can’t have, everyone you’re not. (74)

From the soldier’s tale:

Salim is relocated to Glasgow. He has to report in person to the local Home Office outpost every two weeks. At any of those visits he is liable to be detained and removed to Italy. He is still suspended in this purgatory, waiting and hoping and dreading. One could diminish a man to nothing, to chaff, to dust, with this; the only weapon you need is time. (89-90)

Read the stories. They are not going away. Migration remains, and is not halted by hostile environments. In fact it is caused by them.

You can find my post about the first book of stories here. Refugee Tales, edited by David Herd and Anna Pincus. Published by Comma Press in 2016. 150pp Profits go to Gatwick Detainees Welfare Group and Kent Refugee Help

Filed under Books, Books and Walking