One of the most stressful parts of writing for publication is finding a publisher. We have had good experiences such as being invited to write a book on a particular topic; and stressful ones, like having a first draft but no publisher.

I’m delighted to say that Policy Press took on The New Age of Ageing: how society needs to change, early in the writing process. Because of the tricky process we had been through – as Eileen explains – we were careful to target a publisher who would be interested in the book. They will be publishing it in September. We are very pleased that they have just been named the Independent Academic and Professional Publisher of the Year 2016.

I asked my two co-writers, Eileen Carnell and Marianne Coleman, to say something about the process of finding a publisher.

Eileen begins with a ballad called

The long and winding road*

We’ve walked the road before

As experienced authors we set out on a new collaborative expedition. We knew we had a book that was prescient. Reviews of Retiring Lives, our work with retirees, our membership of a retiring group, all revealed a demand for a more in-depth account of the long and complex process of retiring.

We were confident, we knew how to write and knew how to submit proposals. We knew the terrain, we had the map and compass. We were excited about approaching publishers – starting with those who had published our work before. We studied their checklists and adapted every proposal. We analysed the competition, re-wrote the synopsis, submitted draft chapters and waited.

We sent proposals to eight publishers. One problem is that you can only approach one at a time. We left an interval of a month between sending material and chasing up a response. ‘A wonderful idea for a book,’ they all agreed, ‘but not the sort of thing for us’.

After all these rejections, friends suggested approaching an agent. We contacted six. Same story: ‘Great idea, but not our area’.

During this 18-month period of contacting publishers and agents, we completed the first draft of the book and polished and burnished chapters.

And many times we’ve cried

To say we experienced ups and downs would be a massive understatement. But the good thing about writing collaboratively is that the highs and lows hit one or other of us at different times. After a rejection we soon felt hopeful and excited again when we approached someone new. We were convinced every time that this was going to be the one. Throughout this period of misery and elation we refined our chapters, found further research articles and redrafted.

Then we thought of self-publishing and attended courses and workshops to help us down this avenue. While fascinating we were not convinced about this route.

This book is so nearly finished why not send it directly to a publisher. Look for a different sort of publisher, one who had a good, changing list that appeals to the sort of readers you want to attract.

So we approached Guardian Books.

Your destination is on the left

The editor liked the book very much but said it needed EDGE! It would be a ‘trade book’, intended for general readership. So we rewrote the whole book to address the reader directly, became more informal and modified our referencing system. This was a major change for us. We submitted – with the required EDGE. But it still wasn’t edgy enough and we had to do it all over again.

Retiring with Attitude was published by Guardian Books in the summer of 2014 and was top of their best-selling chart for ten weeks.

What did we learn?

Get a contract before doing so much writing

* with apologies to Lennon and McCartney 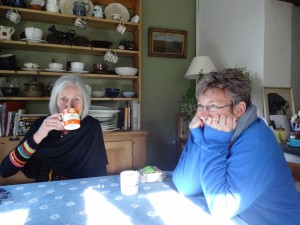 Marianne and Eileen in Caroline’s kitchen in January 2015

And Marianne wrote this about the proposal for The New Age of Ageing we made to Policy Press:

The time we spent talking about and polishing the proposal was time well spent. As we have moved ahead with the writing process we have checked back to the proposal many times. Looking at it now that the book is finished I think we remained true to the initial vision, although there has been quite a lot of re-arranging of chapters and their content. As one of the three authors, I have only been involved in writing non-fiction so what I have to say may not apply to fiction, but in my view, writing the proposal is the single most important step in producing a book.

When I look back on the notes that I took from our first meeting, the first word I wrote down is ‘purpose’. The notes that followed sketch out not only purpose, but also some of the key themes that have continued to dominate our thinking as we worked our way through the writing. The first draft of the proposal emerged from those notes. Although the key themes and purpose stayed largely the same, I lost count of the number of times the whole proposal was revised. At one of the early meetings we actually read the draft out loud, which turned out to be an excellent way of picking up half finished thoughts and unfortunate wording.

What does a proposal cover?

The suggestions of what to include vary a bit from one publisher to another but the main headings are pretty similar for all. In the case of Policy Press they are:

Trying to make our ideas fit those headings sharpened up the thinking wonderfully!

In addition publishers need some practical details including the estimated word count, an idea of the timetable to completion, names of referees and author CVs. Policy Press were also keen to have a sample chapter to send out to referees with the proposal.

It was great to get feedback after the proposal and chapters had been read by the referees and the editor. We revised the proposal in light of the comments and it was then sent on for a final decision about whether or not we got that vital contract.

While it is important to have a good, well though through proposal it doesn’t mean you have to stick to it rigidly when writing as other ideas may occur to you and through writing you may come to understand things differently. For example, we added the final chapter, which includes our vision.

In March we posted about collaborative writing: One Book, Three Authors. This was reported on Policy Press’s blog.

In February we posted about a residential writing retreat: Writer’s Residential

The New Age of Ageing: how society needs to change is available to pre-order on the Policy Press website for £14.99 here.

In May we plan to write about getting and using feedback.

What strategies can you recommend to find a publisher?