So what’s it like, this blogging? my friends would ask when I set up bookword.co.uk about six months ago. Very few people I know are involved in blogging. Something to do with their preferred modes of on-line communication I think.

Not like anything I’ve ever done, I would answer. But recently it has occurred to me that it is a bit like something I have done – writing to a penfriend. I haven’t met most of the people who read this blog, and I hadn’t met either of my two penfriends when I began to correspond with them. It’s a periodic, episodic kind of communication; every now and again I write something of interest to me and sometimes people reply. I can select the content of my letters/posts. Writing a blog and writing to a penfriend are both about communicating, about making connections, through the written word.

My first penfriend was Matilda Mayer, a girl of my age, 12 or 13, who lived in Mauritius. I liked getting the airmail envelopes with the exotic stamps, but sadly remember very little about the content of our letters. Nor do I remember why or how we stopped corresponding. I do remember thinking that it was very exotic to live on an island in the Indian Ocean. I think of her whenever I hear Mauritius mentioned.

My second pen-friendship was more recent, from 1990 to 1996. Robert O’Neal’s address was Potosi Correctional Center, Mineral Point, Missouri, USA. Potosi is a prison, nothing correctional about it. When I first wrote to Robert I asked him what he wanted me to write about and whether would it be disturbing to him to hear about my life. He told me he would love to hear my stories. So over the years he read about my daily life in North London, my holidays in Europe, incidents – and there were many – in the lively school in a deprived area of London where I worked, about my daughter, my friends and my cat – although he preferred dogs.

One time he was really excited to see my street on tv. An IRA bomber cell had stopped their van at the top of my street, and shot and wounded a police officer in the chase. I had slept through the whole incident. Irritated that my paper had not been delivered I opened my front door to find a line of English bobbies on their hands and knees across the street, doing a fingertip search. Robert loved this kind of detail. I was writing a kind of dedicated, individualised blog for him.

He responded with stories from his life in Potosi and eventually some things about his life before he was sent to prison. He told me when he got into trouble, about his friends, the progress of his appeal, his frustrations with his legal situation, about his failed attempt at escape and the punishment that ensued. Sometimes he picked out a poem he liked from Palgrave’s Treasury, which I had sent him. He would tell me what he liked about it. He tried writing poems himself. Then he took up fiction writing, fantasy fiction and sent me long unedited stories. I preferred his letters, because they were more concerned with him, but I understood that he liked to escape into the worlds he had created.

Robert was white, in his 30s, from a less than affluent background, with a troubled childhood that had resulted in him being ejected from his school. He had never really got a good foothold in adult life. We wrote about 200 letters to each other and we sent each other postcards. I was able to send him books and tapes before the prison authorities became more strict and they were banned.

Through writing letters he became my friend. I cared about him and about the life he was in. We were able, as friends are, to add to each other’s lives. He was very much in my life; I would always be thinking about my next letter, as I am about the next post on my blog. This will amuse Robert, I should tell him about this, what would he think of this, would run through my head. I went to visit Robert in Potosi. Twice. I still miss him and think about him, cherish his memory. He was executed in 1996. 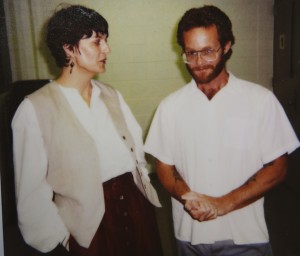 I found out about the organisation LifeLines from an article in the Independent about the pen-friendship between a woman in the UK and a prisoner on death row in Louisiana (I think). I could do that, I thought. And so I did. I have recently seen an advert for LifeLines in Amnesty magazine and been involved in some Tweets about LifeLines. They need letter writers for prisoners on death row. I wonder about starting over, making a new friend.

I hope, dear reader, you don’t need my words as much as Robert did. And perhaps you might consider writing to someone on Death Row?

If you have enjoyed reading this and want to be notified of further posts please subscribe to my blog. Enter your email address in the box on the top of the column on the right.