This is a dark book, not so much frightening as – well, dark. Although in her 20s the narrator, Eileen, appears to be obsessed in the ways that adolescents can be: bodily functions, secret passions, easily influenced, hard exterior. She does not have much going in her favour in the novel: a dreary job, a dead mother, a drunken father. And she lives in a town so dull that she calls it X-ville. 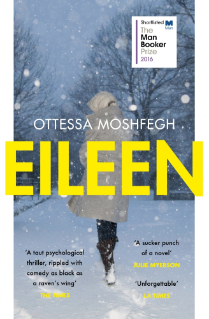 It’s a book that has done very well in the literary awards and accolades:

The story is located in coastal New England, near Boston, in 1964 at Christmas time. The narrator is reflecting on events 50 years before. Eileen is introduced to us as a rather non-descript kind of young woman, with few memorable or redeeming features.

I looked like a girl you’d expect to see on a city bus, reading some clothbound book from the library about plants or geography, perhaps wearing a net over my light brown hair. You might take me for a nursing student or a typist, note the nervous hands, a foot tapping, bitten lip. I look like nothing special. It’s easy for me to imagine this girl, a strange, young and mousy version of me, carrying an anonymous leather purse or eating from a small package of peanuts, rolling each one between her gloved fingers sucking in her cheeks, staring anxiously out of the window. (1)

All readers know that appearances can deceive.

Eileen works in an admin job in the local prison for young offenders. She has no friends, no interests except for her at-a-distance obsession with the guard Randy. She lives with her father, a drunk and an ex-policeman who is a liability to his daughter and his neighbours. Neither of them make any effort to keep the house clean or pay attention to what they eat. Eileen has taken to keeping his shoes in the trunk of her car so that he will not wander out and terrorise the neighbours. A local policeman takes her father’s service pistol off him and gives it to Eileen for safe keeping. Her father ignores Eileen, or makes abusive comments to her. She considers killing him, much as she wonders about being saved by Randy.

Then just before Christmas Rebecca arrives at the prison to take up an education job. It is clear to the reader that this young woman is unsuitable for the post, but Eileen is immediately in awe of her. Her sophisticated taste in dress is entirely inappropriate. The young women go out drinking together and Rebecca, more knowledgeable about the world, abandons Eileen to the attentions of a barman. Rebecca shows too close an interest in one of the boys in the prison.

When Rebecca invites Eileen around to her house for a Christmas Eve drink, Eileen anticipates an exotic evening in tasteful surroundings. Many things are unexpected in this book, but the reader is not surprised that the evening turns out to be very different, critical in Eileen’s young life, even if the events themselves are surprising.

Some themes in Eileen

Patricide by badly fathered children threads its way through this novel. The children in the prison, Eileen herself, and perhaps Rebecca all appear very damaged by poor parenting. Eileen is well on the way to becoming as much of a drunk as her father. She has learned to keep what she calls her death mask face for the outside world.

Another theme is the allure of the other for deprived people, especially deprived young people, and especially if they live in a dull city like X-ville. The unknown is the attraction of Randy for Eileen at the outset of the novel, and of Rebecca as it proceeds. We pick up clues that Eileen managed to create a life for herself, albeit not a very happy one, after leaving X-ville.

And death and physical danger and unsettling details lurk in every scene. At one point you learn that Eileen’s mother died while her daughter slept beside her. We find that Eileen dresses in her mother’s clothes, which are mostly too big for her. She drives a car that is in danger of killing the occupants from a leaking exhaust. Her physical fixations are hardly less than disgusting. The state of the house she shares with her father is no less revolting.

The narrator is aware of some of her own shortcomings.

There was a reason I worked at the prison, after all. I wasn’t exactly a pleasant person. I thought I would have preferred to be a teller in a bank, but no bank would have taken me. For the best, I suppose. I doubt it would have been long before I stole from the till. Prison was a safe place for me to work. (174)

And in case you think that there is no connection between Eileen’s story and your own, she corrects you.

I don’t know where we went wrong in my family. We weren’t terrible people, no worse than any of you. I suppose it’s the luck of the draw, where we end up, what happens. (256)

The novel is framed as a reflection from 50 years later. Occasionally the narrator addresses the reader, as in the quotation above. But mostly she just reminds you that this is a memory. 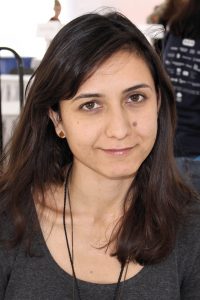 In interviews Ottessa Moshfegh has made it clear that she was trying ‘to push the narrative to awkward extremes’. She was thinking about difficult questions: Can we ever escape the identity we’re born into? What does it mean to be free? Does altruism exist? As a result this novel is always surprising, always revulsion-inducing, but in the end it is hard to know who was the victim and who the wrong doer. That’s life. Happy New Year!

PS Thank you Eileen for the loan of the book.