The Twilight Hour by Nicci Gerrard

The Twilight Hour by Nicci Gerrard is something different in the series of older women in fiction. The 16th post in the series considers a popular, contemporary novel. What picture of an old woman emerges in this novel? 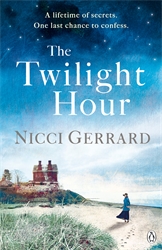 Eleanor Lee is causing concern to her family because she is old and has accidentally set fire to her house. They want her to go into a care home. She is an intelligent and considerate woman, so after resisting she agrees. First, she insists, she needs help in sorting the stuff in the house, especially books, photographs and letters. Peter arrives to do the job, a young man with a broken heart.

Peter and Eleanor spend their evenings together and she gradually reveals her secret. He finds the evidence that would reveal the truth to Eleanor’s family. It concerns a love affair in her youth (seventy years before), at a time when such things were not publicly acknowledged. The events had destructive repercussions in Eleanor’s own family and changed the course of her life.

The story of the younger woman dominates. This novel is not about old age, for the central story is the young Eleanor’s. Nothing is changed for the old woman by telling her secret to Peter. Eleanor achieves no resolution of her doubts about what happened, no accommodation or relief, no desire to reveal her past to her own children. Nothing in the life of old Eleanor changes by revisiting her past.

Eleanor Lee is 94, nearly blind, but independent minded. She is feisty but foresees decline. This portrayal of an old woman draws heavily on the idea of ageing as decline. It is a prevalent view, almost unquestioned, in our society. Here is Eleanor describing to Peter how she sees her future:

‘You do not understand – indeed, why should you and how could you? – the gross indignities of old age.’

‘Yes. Soon, I will very probably need someone to cut up my food. To wash me. To cut my toenails. To pluck the little coarse hairs from my chin. To wash my dirty clothes. To take me to the toilet. To wipe my bottom. I can’t see if you are blushing but you probably are.’

‘No, I’m not.’ Indeed, Peter did not feel embarrassed by the old woman’s words; he almost felt uplifted by them.

‘Then I’ll become incontinent. I’ll dribble. People will spoon mush into my mouth.’

‘This all sounds rather drastic, when you seem so strong, so self-reliant.’

‘Ageing is drastic. It is very bodily. Maybe I’ll start to lose my memory; very probably I will. We can’t escape these things, you know. Bit by bit I’ll go into the darkness. I won’t be their mother any more, or their grandmother, their great-granny. I’ll be like an ancient leaking baby.’ (49)

The intended effect on Peter, and the reader, is of shock at the horrors of old age – decline into ‘an ancient leaking baby’. It is not clear to me why Peter ‘almost felt uplifted’ by what she says. The use of the word ‘almost’ is ambiguous, and what is uplifting about her words? The revolting picture she paints is in contrast to her actual situation, for she manages a household with support, and is not dependent for everything, every personal thing, on other people. Perhaps this image, put into Eleanor’s own mouth, of decay and dependence is intended to draw attention to the contrast between the old and the young woman.

There is a second depiction of fearful oldness in the character Meredith, Eleanor’s vindictive step-sister. Meredith suffers from dementia, and Peter and Eleanor pay her a visit, which is another vision of hell. Is the reader meant to be frightened or disgusted by the decay of old age?

The novel is narrated as if, since the grande passion that is at the heart of the novel, there has been very little of importance in life for this old woman. It seems unlikely to me that after seventy years, the love affair would still have been the main story that Eleanor told about herself at 92, especially as Nicci Gerrard suggests that she had an important career in teacher education, brought up children, was independent from an early age. Are women defined by their relationships to men, or is that only in popular fiction?

I was not convinced that Eleanor would so strongly have wanted to keep her secret from the younger generation. And that she is capable of telling it to a stranger. Did the secret matter so much? Is the framing of the main story, as the reminiscences of the old woman, a plot device?

We are invited to agree that the preoccupations of the younger Eleanor Lee would remain into old age – the necessity of keeping her secrets hidden. To this end, Eleanor sets fire to the filing cabinet, and unwittingly to the house, and then employs the troubled young man to find and destroy the evidence and to listen to the story.

The Twilight Hour is at heart a historical romantic novel about a love affair at the moment when Britain was entering the Second World War. The old woman is attractively drawn, but nothing is changed by her revelations, and we have to believe that all that matters in one woman’s long life was a brief passion, experienced seventy years before.

The Twilight Hour by Nicci Gerrard (2014), published by Penguin pp407