Learning about Ageing from Mrs Palfrey

Mrs Palfrey is the main character in Elizabeth Taylor’s 1971 novel – Mrs Palfrey at the Claremont. She featured in the very first post about older women in fiction on this blog, which considered how an older woman was represented in fiction. Here I want to explore what we can learn from Mrs Palfrey about how older people are treated. 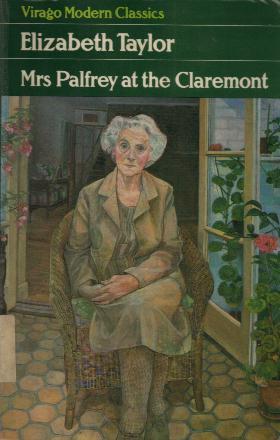 Mrs Palfrey is a widow, whose daughter does not want her to share her life in Scotland. Mrs Palfrey finds an advert for residential accommodation in the Claremont Hotel, Cromwell Road, London. When she arrives she finds that a group of similarly aged people are already in residence. They share no connection beyond the hotel, but they have loneliness, reduced economic resources and declining physical capacities in common.

External contacts feature large in the social life of the older people at the Claremont, and Mrs Palfrey is pleased to have a grandson working at the British Museum, and she confidently expects an early visit. Not only will this provide her with company but also enhance her status in the residents’ small world.

When Desmond fails to visit she encourages Ludo to stand in for him. Ludo rescued Mrs Palfrey when she fell outside his bedsitter, and he willingly agrees to act as her grandson. Inevitably le vrai Desmond appears and confusions abound. Much of the narrative is concerned with Mrs Palfrey’s relationship with Ludo.

This novel offers a stark reminder of what it is to be old, and especially how the old are treated. But it is not depressing. There are cheerful spirits, warmth and enjoyment to be experienced.

Let us count the ways old people are treated.

Mrs Post is waiting anxiously for a cousin, but it is raining.

A summer’s evening drive had been promised, with a picnic. It was a yearly occurrence, and gave the cousin, who was ten years younger than Mrs Post, a sense of duty done which might last her, with any luck, for the following twelve months. [Mrs Post said] ‘As one gets older life becomes all take and no give. One relies on other people for the treats and things. It’s like being an infant again.’ (129-130)

Mrs Arbuthnot leaves the Claremont for alternative accommodation ‘Her indefatigable sisters had found it for her, and much humiliation she had borne while they were doing so.’ (102). She needs a place where ‘someone must be paid to dry up after her’ for she has wet her bed on several occasions.

When her grandson does not turn up at the Claremont Mrs Palfrey makes unsuccessful attempts to invite old friends who find excuses not to visit her.

Choosing to provide care for the elderly as a commercial enterprise does not guarantee the quality of the care, or attention to needs. The management of the Claremont barely welcomes the older people, treating them as an inconvenience rather than guests.

The receptionist was coldly kind, as if she were working in a nursing-home, and one for deranged patients at that. (2)

Mrs Palfrey considers the outlook from the room she has been allocated.

From the window she could see – could see only – a white brick wall down which dirty rain slithered, and a cast-iron fire-escape which was rather graceful. She tried to see it that it was graceful. The outlook – especially on this darkening afternoon – was daunting; but the backs of hotels, which are kept for indigent ladies, can’t be expected to provide a view, she knew. The best is kept for honeymooners, though God alone knew why they should require it. (3)

And of course, the quality of the food, served in a three week menu rotation, is very poor, despite mealtimes being important markers in the institutional day.

And when Mrs Palfrey falls just outside the hotel, the manager Mr Wilkins wants her out of sight, more concerned to remove this embarrassment from the pavement than with her best interests.

It can be dismaying to consider the darker side of old age, the loneliness, physical decline, neglect and ultimate death. To distance themselves from these aspects of age many of the reviews of this book on other blogs describe the residents as eccentric. They are not.

Mrs Arbuthnot is malicious, spikey and unkind. She is also crippled with pain from arthritis, and suffering the humiliation of incontinence.

Mrs Post is anxious, always out of her depth, especially beyond the walls of the hotel, getting the right library books for Mrs Arbuthnot, or dealing with sharing the fare for a taxi.

Mr Osmond tells dirty jokes in a loud whisper to any man he can buttonhole, and likes to hold himself aloof from the ladies. He writes complaining letters to the Daily Mail of the ‘It would never have happened in former times …’ He is hopelessly out of his depth in dealing with slight acquaintances at a Masonic dinner and in his expectations of Mrs Palfrey.

Lady Swayne makes the most appalling prejudiced and bigoted announcements, prefacing them with ‘I’m afraid …’

Mrs Burton who loves to drink with her brother-in-law, or without him.

These people are all trying to cope with the difficulties of ageing. And while we might not condone some responses, they can hardly be described as eccentric – that is unusual or strange. Elizabeth Taylor’s craft is in revealing why they behave in these ways.

The film adaptation (2006) locates the story in the early 21st century, makes much less of the privations of age, and rather encourages the idea of eccentricity. I didn’t like it at all.

The delightful Ludo is respectful, attentive and helpful to Mrs Palfrey in a way that none of her family manages. 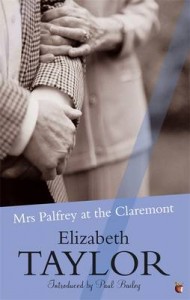 Despite all this, Mrs Palfrey at the Claremont is both a funny and an uplifting book. There is plenty of comedy narrated in Elizabeth Taylor’s controlled and wry style.

Mrs Palfrey has a three-part code of behaviour:

Be independent; never give way to melancholy; never touch capital. (9)

She struggles with all three and frequently has a word with herself when she begins to feel down. To be old and alone may be difficult, suggests Elizabeth Taylor, but there is dignity and new experiences to be had at any age.

In this delightful novel Elizabeth Taylor does a great job of respecting older people and sympathetically revealing the challenges they face. She doesn’t lump all older people together, shows us individuals coping in the face of difficulties. She uses wit and humour to point up how people respond to each other to protect themselves from these difficulties.

Writing 40 years ago she identified an enduring feature of old age. Loneliness is still a killer for old people, even in a busy city like London. (God bless the Freedom Pass). There is a campaign end loneliness and AgeUK has also highlighted the issue.

Elizabeth Taylor did not live to be old herself, she died of breast cancer aged 63, her family still close to her. Yet she knew what it was to be treated with disdain, impatience, contempt and neglect in old age. We see all of these in this book.

I must thank my book group for enhancing my understanding of this book.

Mrs Palfrey at the Claremont was the first book to be reviewed in the older women in fiction series. You can see the complete list here.