Memoirs of a Polar Bear by Yoko Tawada

I have read more adventurous and innovative fiction since deciding to read a book a month by a woman in translation. And the topics covered appear to be serious issues for humans. Those in German seem especially concerned with world issues – climate change, refugees etc.

A major prize has been inaugurated since I began the project in September: the Warwick Prize for Women in Translation. This month I look at the first winner:

Memoirs of a Polar Bear by Yoko Tawada, translated from the German by Susan Bernofsky, published by Portobello Books. 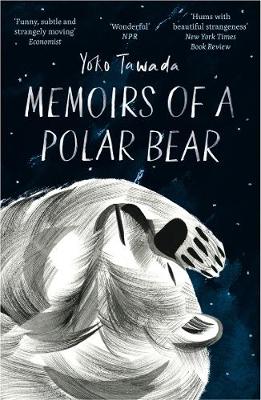 I could have called this post Why write about real bears? (as I did about people some time ago). The novel is formed of three stories each told by a different but related bear with origins in real life. I have included pictures of Knut, the youngest bear, born and brought up in Berlin Zoo.

The first bear, his grandmother, was born in Russia, sent to East Germany and then to Canada. She wrote her own biography after she was unable to perform in a circus.

The story of the second bear, her daughter Tosca, is told by her trainer as she tried to design an original and creative act for the bear in the circus. Tosca rejected her cub at birth so he is raised by a human, with whom he formed a close connection. Knut tells his own story as he grows up in Berlin zoo, the poster cub for conservation. 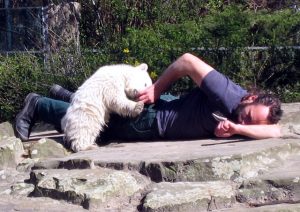 Each section opens with a physical sensation of bear-ness, and one we can relate to in our human-ness: curling in a foetal position, stretching, suckling. The stories are strange, dreamlike, prone to sudden shifts in the telling. It seems that the bears can communicate with humans, write and even, in the case of the first bear, move around in human society without arousing curiosity.

As with any story told from the point of view of an animal, it points to aspects of humans, especially about their relationships with the natural world. As a result this is also an unsettling book. What are the boundaries between humans and other animals, we find ourselves asking. Are we so different? What can we say about the way we care for animals, even, as in the case of Knut, for good motives. (In his case he was used to promote awareness of climate change.) And what about our care of the natural world? (Knut never saw the Arctic. What does it mean to keep a polar bear in temperate conditions?) Polar Bears are being made highly vulnerable by the shrinking of the ice caps in the Arctic.

Much of the subtext is concerned with communication and language, and raises questions about humans and language, especially as so many humans today need to use something that is not their native/mother tongue.

The first bear is told by her publisher’s representative that she should write in her mother tongue:

“The language your mother speaks.”

“I’ve never spoken with my mother.”

And later her reminds her to write in her own language.

“My own language? I don’t know which language that is. Probably one of the North Pole languages.”

“I see, a joke. Russian is the most magnificent literary language in the world.”

“Somehow I don’t seem to know Russian any more.”

”That’s impossible! Write whatever you want, but in your own language please.” (57)

And to make a point, and to further her campaign to be relocated to Canada because it is colder than Berlin, she writes this for the publisher, in Russian.

“All penguin marriages are alike, while every polar bear marriage is different.” (58)

Confusions of language and communication abound in the three novellas, much as they must do for any migrant. And we must assume that Yoko Tawada has some insight into this, having moved to Berlin from Tokyo in her 20s. 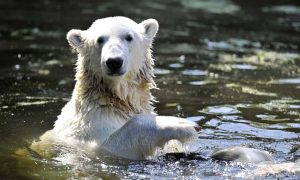 Warwick Prize for Women in Translation

The prize was introduced in 2017. Here is the announcement of The Memoirs of a Polar Bear on the website. I welcome this award as it will raise people’s awareness of women in fiction (woefully small numbers of novels published by women and tiny proportion of those chosen for translation). And I’m pleased that it is my alma mater hosting it. I did a history degree there about half a century ago, which required the study of foreign languages. The tradition of promoting foreign language use continues.

Memoirs of a Polar Bear by Yoko Tawada, first published in German in 2014, Etuden im Schnee. Published in English in 2016 by Portobello. 252pp

Translated from the German by Susan Bernofsky

Winner of the Warwick Inaugural Women in Translation Prize (2017) 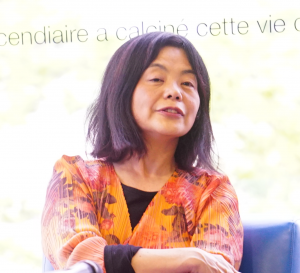 An interview with the translator, Susan Bernofsky, about her work in the LARB.

Previous posts in this series include

Author picture by G.Garitan from May 2016 at a conference in the library Falada at Reims.via WikiCommons