This collection of short stories was a Christmas present from a sister. ‘I’m surprised you don’t know it,’ she said when I thanked her. ‘I know you like short stories.’ She’s right I do. And I like these ones very much. Wendy Erskine has been widely acclaimed for these stories and has published others. They have a particular poignancy and darkness to them. We are warned that all is unlikely to be happy in these stories, for Sweet Home was the name of the plantation in Beloved by Toni Morrison.

The ten short stories are all set in and around Belfast. This is the Belfast of the present day, not of the Troubles. These are stories of ordinary people, leading unremarkable lives, although often full or disappointment, loss and failure. The narration is in a down-to-earth, matter of fact tone that suits each story well.

Take, for example, the title story. It begins with the building of a community centre, but moves into the life of its architect and her husband. They seem to live controlled lives, few excitements. They hardly seem to be a couple. They are childless, but it is revealed that they lost a child at six years. A local couple work for them in the garden and in the house, and it appears that the architect’s husband is trying to appropriate their child. It does not end well.

Take, for another example, the story called Arab States: Mind and Narrative. A middle-aged woman, disappointed in her life, begins to obsess about a man she rejected at college. He is now something of a media pundit on the Middle East and has written a book, which gives its own title to the story. She decides to attend an event on the mainland at which he is due to speak. She mismanages the trip. It does not end well.

Or, for a truly shocking example, Lady and Dog. This story features a teacher who does not want to change her ways. Olga behaves with passive aggression and this is gratingly revealed at the start of the story. She is delaying her meeting with her headteacher by sharpening pencils. Ms Druggan wants to sort a few things out, especially related to Olga’s use of the computer. This is how their meeting ends.

Another thing, if you haven’t switched on your computer in two weeks, do you not feel you’ve missed a lot of communication?
Olga thinks. Not really, she says.
What do you mean not really?
This is a primary school with eight people working in eight rooms. It’s hardly a conglomerate. If anyone needs to speak to me, they know where to find me. And if I need to speak to someone the reverse holds true.
Olga picks up the handbag that has been resting at her feet.
Is that it? she says. (161)

Olga may be capable of sharpening pencils to avoid a meeting, but she is capable of much more instrumental, self-serving and shocking actions in pursuit of other projects outside the school.

These are ordinary people, living unremarkable lives, but buried in each life is failure, or disappointment or loss. Many of her characters are acutely lonely. All are unable to improve their lives.

While her tone is without fireworks, or drama, she is able to be very tender towards her subjects. We are not being asked to despise them. In the story of the widow who looks out at a family of Somalis who have moved in over the road, it is the dreadful son who is unfeeling and self-centred. He does not notice that she also misses his former partner and their son. The story is not about the strangeness of the newly arrived family. It is about Jean’s attention to them, rather than to her son.

Jean’s son Malcolm had decided to make one of his infrequent visits. He took the seat in front of the television and when he turned it on she heard him let out his usual sigh at the poor choice of channels. Jean was positioned at the end of the sofa because it gave the best view out of the window.
Malcolm was telling her that he had a new boss. The boss had only been in the job a couple of weeks but Malcolm didn’t like him. Some of the others did, up to them, be he didn’t
Only a couple of weeks, Jean said. Still early days then really, isn’t it?
Early days and already not going well, Malcom said.  (35)

These are the opening four paragraphs of Inakeen. You already know everything about Malcolm and his lack of attention to his mother, her life, what she says and his responsibilities.

In both these quotations you can see that an outstanding feature of her prose is the dialogue.

This is Wendy Erskine’s first collection of short stories. I will look out for the next one. Thank you Sal for the introduction.

Sweet Home by Wendy Erskine, published in 2018 by Picador, and now available in paperback. 218pp

In December 2003 Joan Didion’s husband died of a heart attack. She had been married to John Gregory Dunne for forty years and had worked closely with him during that time. They had a daughter who was critically ill in hospital in New York. They had just been to visit her.

Life changes in the instant.

You sit down to dinner and life as you know it ends.

The question of self-pity.(3)

And so began Joan Didion’s year of magical thinking.

The Decades Project on Bookword has arrived at the 2000s. The project featured non-fiction by women from each decade from the start of the 20thCentury until 2009. The Year of Magical Thinking  was published in 2005. 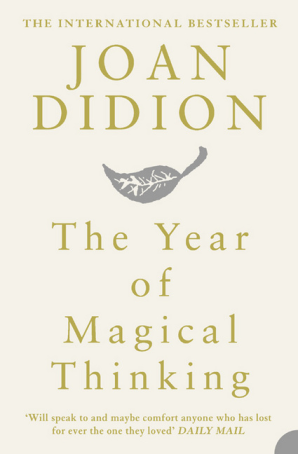 Joan Didion is a novelist and journalist. As a writer she finds her way to her subject through the experiences of the individual, in this book her reactions to her husband’s death was the focus.

Except, of course, none of it makes any sense; it is ‘the very opposite of meaning’ as she says later and hence this is her year of magical thinking.

Some examples of magical thinking: she cleared out his clothes as she knows one should but she could not give away his shoes. He would need them when he returned, even though she knows he is dead.

She researches online, as a good journalist, seeks for what she should have done differently for her husband and instructs medical staff as a result of her knowledge.

She had worked very closely with John Gregory Dunne in their 40 years of marriage, and must find a way to write without him by her side. It is more difficult that she can imagine.

Time, especially anniversaries, takes on special significance, as do familiar places, and these carry her down into what she calls a vortex. Even the title of the book, the book’s subject matter, is shaped by a time limit, an anniversary.

I realize as I write this that I do not want to finish this account.

Nor did I want to finish the year.

The craziness is receding but no clarity is taking its place.

I look for resolution and find none. …

I also know that if we are to live ourselves there comes a point at which we must relinquish the dead, let them go, keep them dead. (224-6)

This was my second reading of her book. I had the same experience as ten years ago, that is I couldn’t stop reading it. But on re-reading I could see how she made this account so compelling. She writes with a kind of sparseness and with great precision. And she provides the voice of reason commenting on her ‘magical thinking’ and with a complete focus on herself, her husband and her daughter.

Her insights are stronger for this. For example she differentiates between grief and mourning; grief being passive, what happens. Mourning is the process of dealing with grief, and requires attention. It takes her some time to get to the mourning. And this book is part of that attention.

And here is her observation on grief and its effects:

Nor can we know ahead of the fact (and here lies the heart of the difference between grief as we imagine it and grief as it is) the unending absence that follows, the void, the very opposite of meaning, the relentless succession of moments during which we will confront the experience of meaninglessness itself. (189)

It is for such insights and for the strength of her writing that Robert McCrum placed this book second on his Guardian list of best 100 nonfiction books. Joan Didion adapted the book for the stage and the piece was directed by David Hare with Vanessa Redgrave in 2007.

In 2018 for the Decades Project I featured non-fiction by women having focused on novels in 2017. I selected one book each month from successive decades (January 1900-1909; February 1910-1919 etc) and will review the Project in December.