Tove Jansson’s name will be familiar to readers of children’s fiction. She created the Moomins in 1945. They appeared in books and cartoons and then newspapers, eventually in 12 countries. They were so successful that Walt Disney wanted to acquire them. He was turned down. Tove Jansson was much more than the creator of a hippo-like family for children. She was also  an artist and a writer of adult fiction, including The Summer Book. 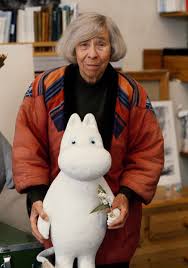 The Summer Book has never been out of print since its publication in Swedish in 1972. It emerged as the most popular fiction title in ten years of sales at the London Review Bookshop in 2013. I came across it as a recommendation in a Mslexia diary and borrowed it from the library. I have since bought two copies: one for my mother and one to keep.

While The Summer Book is fiction, it is evident that Tove Jansson drew on her experiences of summer living on an island in the outer archipelago in the Gulf of Finland. There was an island, and a house and a little girl called Sophia (a niece not a grandchild) who has now grown up. Tove Jansson spent five months every summer with her ‘long-term companion’ Tuulikki Pietila on an even more remote island from 1964 until 1991.

How does The Summer Book fit with the series of older women in fiction? The main characters are a grandmother, who is a sculptor, and her six-year-old granddaughter Sophia. Their shared summer life is revealed through a series of episodes. These illuminate a vivid relationship between different generations. The grandmother lives with a sharp awareness of nature: the sea, birds, the plants, the long summer days and the weather. And she encourages Sophia’s inclination to do the same.

Sophia and her grandmother, like any friends, dare each other to break the rules, argue and fall out, comfort, taunt and tease each other. And they turn to each other in time of need. Sophie’s mother has recently died. They have adventures, and exchange observations on the world. They discuss death, heaven and hell, why a scolder died, share a terrible song about a cow pat, build a miniature palace, dodge sex education, and sometimes avoid each other. Both have tantrums and sulks, and fears and regrets. They are respectful of each other too in a way that is rare between adults and children.

This is no sweet, passive grandmother but an older woman acutely aware of her surroundings and herself including her physicality. The book opens with a section called The Morning Swim:

It was an early, very warm morning in July, and it had rained during the night. The bare granite steamed, the moss and crevices were drenched with moisture, and all the colours everywhere had deepened. Below the veranda, the vegetation in the morning shade was like a rainforest of lush, evil leaves and flowers, which she had to be careful not to break as she searched. She held one hand in front of her mouth and was constantly afraid of losing her balance.

“What are you doing?” asked little Sophia.

“Nothing,” her grandmother answered. “That is to say,” she added angrily, ”I’m looking for my false teeth.”

The child came down from the veranda. “Where did you lose them?” she asked.

“Here,” said her grandmother. “I was standing right there and they fell somewhere in the peonies.” They looked together.

When they have retrieved the dentures the grandmother leads the way to a forbidden ravine. She tells Sophie what it feels like to dive.

“You let go of everything and get ready and just dive. You can feel the seaweed against your legs. It’s brown and the water’s clear, lighter towards the top, with lots of bubbles. And you glide. You hold your breath and glide and turn and come up, let yourself rise and breathe out. And then you float. Just float.” (p24)

This is a grandmother who takes children’s questions seriously, is herself fully alive, and not just shown as a person in relationship to others. She has weaknesses and sometimes a short temper. She is playful and mostly responsible. Both Grandmother and Sophia suffer from jealousy, temper and disappointment. And they are generous with each other, as the scene with the false teeth shows. In the most electrifying chapter in the book Sophia believes she conjures up a massive and frightening storm. She is distraught at what she has done and is only mollified when Grandmother claims responsibility.

This old woman lives on her own terms. She is straightforward about pain, nature, what other people do. She has a strong sense of herself and is offended when she is ignored. She is stoic about her infirmities, frequently taking herself off to sleep. She is practical, creative and bolshie. Of all the older women considered in the novels in this series (about older women) she is the one I most want to be like.

One of the most poignant episodes relates to Sophia’s attempt to sleep in a tent. In the night she creeps back to her grandmother, and the two get talking about sleeping rough.

“All I said was that when you are as old as I am, there are lots of things you can’t do any more …”

“That’s not true! You do everything. You do the same things I do!”

“Wait a minute!” Grandmother said. She was very upset. “I’m not through. I know I do everything. I’ve been doing everything for an awfully long time, and I’ve seen and lived as hard as I could, and its been unbelievable, I tell you, unbelievable. But now I have the feeling that everything’s gliding away from me, and I don’t remember, and I don’t care, and yet now is right when I need it!”

Sophia helps her remember what it was like to sleep in the tent and this enables the child to return to the tent feeling safe. And the grandmother remembers better. They both fall asleep. (p93-4) 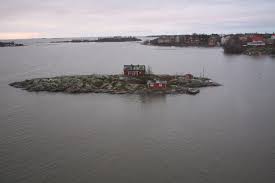 The episodes pull you along, related in a calm, even voice, a little at a distance from the two main characters, which has a hypnotic effect. This distance may be just the effects of the translation from Swedish. It made me want to visit Finland again.

Translated from the Swedish by Thomas Teal.

Have you read this novel? Did you react as I have?

Older Women in Fiction: The next book to explore in the series will be Doris Lessing’s Love Again. This will be in April.