The Franchise Affair, a classic mystery, was published in 1949. Its mystery is not in identifying the criminal, but in uncovering the lies and flaws in young Betty Kane’s story to exonerate the two women she has accused. The task falls to Robert Blair, an established country solicitor. 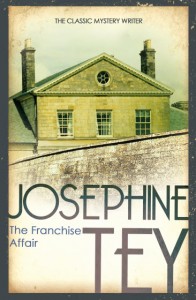 This is the 18th review in the Bookword series about older women in fiction. Thank you to the reader who suggested the character of Mrs Sharpe from The Franchise Affair.

Marion and her mother, Mrs Sharpe, are accused by Betty Kane of abduction and ill treatment. 15-year old Betty claims that they imprisoned her in the attic of their house, The Franchise, which stands outside the small country town of Milford.

Robert Blair is living a very comfortable bachelor life in Milford, cared for by his aunt. The narrative follows his search for the truth, but we do not find much out about his previous life: not married although he had opportunities, his wartime occupation not indicated. His comfortable life is not usually disturbed by criminal cases, but he is attracted to Marion Sharpe and her gypsy-like looks, and motivated to put right the injustice done to her and her mother. The narrative pull of the novel comes from his dogged pursuit of the truth about Betty Kane’s missing month.

Mrs Sharpe is introduced to the reader though Robert Blair’s eyes.

She [Marion] drove a battered old car, from which she shopped in the mornings while her white-haired old mother sat in the back, upright and delicate and incongruous and somehow silently protesting. In profile old Mrs Sharpe looked like Whistler’s mother; when she turned full-face and you got the impact of her bright, pale, cold, seagull’s eye, she looked like a sibyl. An uncomfortable old person. (6) 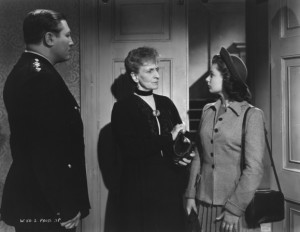 Mrs Sharpe is a gentlewoman, enduring less good times in The Franchise. She knows about good furniture and architecture, and she comes from horse-breeding stock. She inherited The Franchise from a relative, which allowed her to move out of London where she had lived in a boarding house with her daughter. Neither woman has entered the social life of Milford. They enjoy peace and isolation, although it works against them when Betty Kane’s story is published by the mud-raking, strangely-named tabloid – Ack-Emma.

Mrs Sharpe is rather a forbidding woman, and she also has an intelligence which sees to the heart of matters as we find out early on when Mrs Sharpe demands to know if Betty is a virgin. She earns respect from Blair by her refusal to be unsettled by the accusations. He observes to the reader that ‘it was no small achievement to steal the interest from an outraged heroine.’ (29)

She is from the time and class that requires older women to keep their composure in the face of life’s difficulties. We discover that her husband was always speculating and that his suicide left her with a very young child and no money. Even when the Sharpes are arrested and brought to trial Mrs Sharpe remains steady.

The relationship between mother and daughter is easy, based on observing strict boundaries. Marion explains this to Robert late in the novel.

Mother and I suit each other perfectly because we make no demands on each other. If one of us has a cold in the head she retires to her room without fuss and doses her disgusting self until she is fit for human society again. (274)

Her role in the novel is to make it clear that Betty Kane’s story is unfounded from the outset. She represents common sense. Such a strong and intimidating woman would not treat a young girl in the brutal manner of which she is accused. Mrs Sharpe’s steadfast dignity and denial provides the reader – and Robert Blair – with the certainty that Betty Kane is lying. This is older woman as moral authority.

A few other things about The Franchise Affair

An interesting feature of The Franchise Affair is the discussion reading a person’s character in their appearances. Their appearance and especially the eyes are claimed to indicate criminality. Marion tells Blair that Betty Kane’s eye colour indicates that the girl is over-sexed, a post war notion.

‘I have never known anyone – man or woman – with that colour of eye who wasn’t. That opaque dark blue, like a very faded navy – it’s infallible.’(36)

And appearance means Josephine Tey can link criminality to genetic inheritance, another background theme in the novel.

But Josephine Tey’s novel relies on this emphasis to mislead the reader. Much of the power of Betty Kane comes from her innocent appearance. The forbidding appearance, on the other hand, of Mrs Sharpe hides a sharp intelligence, a warm heart and resilience. 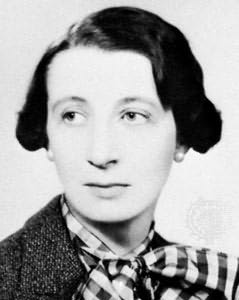 The novel also reflects the dominant social attitudes of the time, not just towards an older woman. Although the Sharpe women are independent they are not capable of resolving their own difficulties and a succession of men have to do this for them. It is the men, the solicitor, the barrister, the garage owner (and former army sergeant), the private detective who must help the women out. And they do. Even the man in the case doesn’t lie.

It is set post-war with some references to the war (air raids, experience in the armed forces for example) and is quintessentially English in a warm beer kind of way, despite Josephine Tey being from Scotland. She used a historical event, the deceptions of Elizabeth Canning from the 18th Century, as a basis for the story. 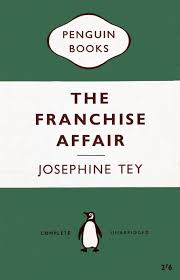 The Franchise Affair by Josephine Tey first published in 1949. The copy used in this post was published by Arrow Books in 2009. 278pp

Sarah Waters says that The Franchise Affair provided some inspiration for Little Stranger, which is also set in a dilapidated large country house in the post war period.

Josephine Tey: A Life by Jennifer Morag Henderson was published in November 2015 by Sandstone Press. Jenny Morrison writes about her reclusive life in the Daily Record in October 2015.