I read this thriller twelve months ago and I noted that I expected to reread it and soon. It turns out that rereading is very rewarding, and nothing is spoiled by knowing the plot, indeed the other features of the novel become more evident. 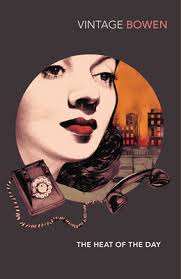 It’s set during the Second World War and the tension comes from the suggestion that one of the main characters, Robert, is involved in treason. The novel opens as the creepy Harrison prepares to meet Stella. Stella has already rejected Harrison, ‘asked him to go away and stay away’. We have been warned that ‘he was not, however, through.’ Harrison visits Stella in her flat and reveals his plan to blackmail her: his silence about Robert can be bought if she becomes his mistress and does not see Robert again. The scene in which Harrison reveals his hand, is carefully drawn out in Chapter 2 and is a powerful example of an effective scene in fiction. Stella’s feelings alter from irritation of being bothered by a man she does not want to see to shock and disbelief at what Harrison tells her and finally confusion about what she should do. Can she believe Harrison? What should she do to protect the man she loves? If Harrison is right should she protect Robert? How can she know? The story is set up, the tension holds, as the interactions between Harrison, Stella and Robert run their course. 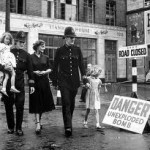 One of the most impressive aspect of this novel is the depiction of living in London during the Blitz.

They had met one another, at first not very often, throughout the heady autumn of the first London air raids. Never had a season been more felt; one bought the poetic sense of it with the sense of death. Out of mists of morning charred by the smoke from ruins each day rose to a height of unmisty glitter; between the last of sunset and first note of the siren the darkening glassy tenseness of evening was drawn fine. From the moment of waking you tasted the sweet autumn not less because of an acridity on the tongue and nostrils; and as the singed dust settled and smoke diluted you felt more and more called upon to observe daytime as a pure and curious holiday from fear. All through London the ropings-off of dangerous tracts of streets made islands of exalted if stricken silence, and people crowded against the ropes to admire the sunny emptiness on the other side. The diversion of traffic out of blocked main thoroughfares into byways, the unstopping phatasmagoric streaming of lorries, buses, vans, drays, taxis past modest windows and quiet doorways set up an overpowering sense of London’s organic power – somewhere there was a source from which heavy motion boiled, surged and, not to be damned up, force itself into new channels. (p90-91)

Elizabeth Bowen does not forget the dead, and she provides a strong image of them, present through their absences.

Most of all the dead, from mortuaries, from under cataracts of rubble, made their anonymous presence – not as today’s dead but as yesterday’s living – felt through London. Uncounted, they continued to move in shoals through the city day, pervading everything to be seen or heard or felt with their torn-off senses, drawing on this tomorrow they had expected – for death cannot be so sudden as all that. Absent from the routine which had been life, they stamped upon that routine their absence – not knowing who the dead were you could not know which might be the staircase somebody for the first time was not mounting this morning, or at which street corner the newsvendor missed a face, or which trains and buses in the homegoing rush were this evening lighter by one passenger. (p91-2)

This passage illustrates her rather difficult style and its density has the effect of slowing the reader, so you have to engage with the direction of the sentence, its meaning, its surprise. In the example above, the sentence that begins ‘Absent from the routine’ by its end has conjured up the non-presence of the dead, and has a very pleasing rhythm. 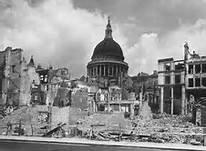 The novel is claimed as a London novel, and it is indeed very clearly located around the Regent’s Park area, although, echoing Stella’s confusion, the blackout means that sometimes she does not know where Harrison has taken her. An interesting article about its London-ness, by Jane Miller (author of Crazy Age), can be found on the London Fictions website. The London location and the heightened sensibilities of living there are contrasted with Stella’s visit to the rural calm of Ireland. Ireland remained neutral during the war, although not unaffected by it (Stella uses months’ supply of house candles, unknowingly). A second contrast is to Holme Dene, where Robert’s mother lives, in the Home Counties. Holme Dene is permanently for sale and rigidly in thrall to Muttikins. Elizabeth Bowen’s description reveals a great deal about Robert’s family:

…upstairs life since the war, had up there condensed itself into very few rooms – swastika-arms of passage leading to nothing, stripped of carpet, bulbs gone from the light-sockets, were flanked by doors with keys turned. Extinct, at this night hour Stygian as an abandoned mine-working, those reaches of passages would show in daylight ghost-pale faded patches no shadow crossed, and, from end to end, an even conquest of dust. (p258)

One important theme of the novel concerns allegiances, what individuals owe to other people. In war it is an unquestioned assumption that one will have allegiance to one’s country and abhorrence of fraternization or spying for the enemy. The central questions of the novel are about Robert’s treachery or not, and Stella’s duty to him or her country.

Stella’s visit to Mount Morris in Ireland raises questions about place in allegiance, of one nation to another, and the bequest to Roderick brings up questions of who owes what to whom in the next generation. To whom, Elizabeth Bowen appears to ask, when the chips are down, do we owe our loyalty? Her answer, I think, is to the integrity of the self and one’s love for others.

It is also a novel about appearances and what is concealed and whether you should trust what you see, what you feel, what you want to trust. At the centre of this theme is Harrison, a shady character, about whom we never know much, not his work, his past, or where he goes or what he does when he is not with Stella. And like Stella we do not know whether to believe what he implies. We do not want to believe that Stella’s lover is a traitor.

Stella has the reputation of a woman who shamefully abandoned her husband. Her son Roderick learns the truth from a woman who has been feigning madness for years. But the truth is not that simple, for Stella has preferred people to believe what they thought was the truth rather than acknowledge to the world that her husband did not want to stay with her. Even Stella’s affair with Robert is presented to the reader as not of the real world.

The lovers had for two years possessed a hermetic world, which, like the ideal book about nothing, stayed itself on itself by its inner force. (p90)

Appearances of the characters reflect something about their role in the plot and their characteristics as well as Elizabeth Bowen’s confidence in handling them. Harrison comes and goes in a shady way. Stella is not directly introduced until Chapter 2. Robert does not appear until Chapter 5. Many of the minor characters appear and disappear as acquaintances did in London’s reduced social world. 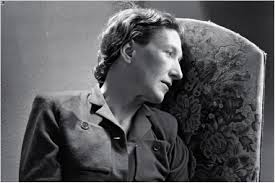 Despite being a published writer for 25 years Elizabeth Bowen found it difficult to finish the novel. She wrote the early sections during the war but it was not published until 1948. She had fallen in love with Charles Ritchie, a Canadian diplomat, to whom the book is dedicated and considered the physical model for Robert. Their affair continued, despite his return to Canada, his marriage and frequent separations, until she died in 1973. (For more details of this and other writers’ lives during the war see Lara Feigel’s The Love-charm of Bombs).

I love this novel. I expect I will read it again and again. I hope I can encourage you to read (or even reread) it.

For another enthusiastic blog review see Book Snob’s here. My reviews of earlier Elizabeth Bowen novels are here: The Hotel, and The Last September.

Reminder: the next general Readalong will be in December. If you want to make a reading suggestion please do so. I will announce the choice in the next few weeks.

Tagged as Elizabeth Bowen, Jane Miller, Lara Feigel, The Heat of the Day, The Hotel, The Last September, The Love-charm of Bombs