Penelope Fitzgerald is being rediscovered yet again. She was acknowledged in her own time when this novel won the Booker Prize in 1979. Now her reputation is being revived by Hermione Lee’s biography, and enthusiastic articles by Julian Barnes. 4th Estate is reissuing her backlist. Great! But it’s a puzzle why Penelope Fitzgerald ever loses popularity. Successful novels by women seem to be forgettable. Something similar happened to Barbara Pym’s novels and to Moon Tiger by Penelope Lively. Even the wonderful Elizabeth Taylor is not widely regarded as an accomplished novelist.

Two years before she published Offshore Penelope Fitzgerald’s publisher informed her she was ‘only an amateur writer’. People refer to hobby writers with the same sneer. Her response was, ‘I asked myself, how many books do you have to write and how many semi-colons do you have to discard before your lose amateur status?’

Thankfully she was not put off and Offshore won the Booker Prize in 1979. Everyone had assumed VS Naipaul’s novel A Bend in the River would win. According to Jenny Turner in the LRB the BBC’s Book Programme suggested the judges had selected the wrong book. Sexism and ageism were at work, especially as Penelope Fitzgerald did not dress in the expected way.

A ‘favourite aunt’, ‘a jam-making grandmother’, ‘Pooterish’, ‘distrait’: this is the sort of thing people wrote about the figure Fitzgerald presented, finding a dissonance between the performance and the craft and brains of the books. It’s tricky enough, dealing with these women writers, but one who’s old as well, and didn’t start publishing until she was nearly sixty: it’s difficult to compute. 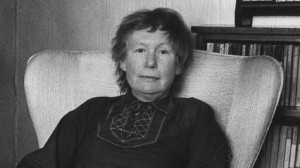 (Who else remembers what the Times said about Eleanor Catton when she won the Man Booker Prize in October last year? ‘She’s a chick, a slight pale (unassisted) blonde, … an unashamed nerd … but with pretty, user-friendly Glee-like nerdiness.’ Plus ca …) 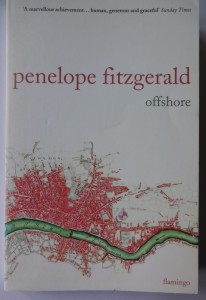 Offshore is a quirky tale about quirky people, who live on the shoreline of the Thames at Battersea Reach.

Between the Lord Jim, moored almost in the shadow of Battersea Bridge, and the old wooden Thames barges, two hundred yards upriver and close to the rubbish disposal wharfs and the brewery, there was a great gulf fixed. The barge-dwellers, creatures neither of firm land nor water, would have liked to be more respectable than they were. They aspired towards the Chelsea shore, where, in the early 1960s, many thousands lived with sensible occupations and adequate amounts of money. But a certain failure, distressing to themselves, to be like othe people, caused them to sink back, with so much else that drifted or was washed up, into the mud moorings of the great tideway.

Biologically they could be said, as most tideline creatures are, to be ‘successful’. They were not easily dislodged. But to sell your craft, to leave the Reach, was felt to be a desperate step, like those of the amphibians when, in earlier stages of the world’s history, they took ground. Many of these species perished in the attempt. (p2-3)

This gentle, generous humour and insight is typical of Offshore. The characters are all in one way or another losers in conventional terms. And yet they all have spirit and resourcefulness and an enviable sense of community. A charming aspect of this short novel is that the characters are revealed through the state of disrepair of their boats.

Nenna lives on Grace with her two children and is estranged from her husband. Much of the novels tension and drive arises from her feeble efforts to resolve her relationship with him. As a resident of a certain area of NE London for nearly 30 years I was amused by Nenna’s reaction to hearing his address in Stoke Newington:

The other characters also live in something of a nether world. Richard, an ex-navy man, whose converted minesweeper Lord Jim is the smartest and most well maintained of the boats, cannot see that he may lose his wife who does not share his pleasure at living aboard. Maurice carriers on his trade as a male prostitute aboard his boat and is always about to make a better life for himself. His kindness extends to permitting Harry to store stolen goods on his boat. Willis is an old painter who lives on Dreadnought, a boat so poorly maintained it sinks even while he celebrates her sale. Hopeless. And Woodie lives separately from his wife during the summer, and then amicably in Purley in the winter, and is generous to all the inhabitants of the Reach.

Although they are quirky, the characters in Offshore are also comfortable because they are so flawed and so like all the people I know. We all occupy a shoreline between conventional mores and our own aspirations, expectations, obligations and ambitions. Re-reading this novel also reminded me of when I worked with troubled adolescents. The unexpected was always happening, events were always dramatic, rarely final.

The River Thames suffuses this novel, is almost another character with its moods, tides, mud and swells. Penelope Fitzgerald was drawing on her own experience of living on the river. And she knew a thing or two about sinking boats.

The only awkwardness was the daily life of the Nenna’s two children. Martha and Tilda seem as precocious as the kids in the tv comedy series Outnumbered. In 1961 these children were allowed to miss school and wander with little supervision – unbelievable in our times of compulsory schooling and testing and fears of paedophilia, let alone drowning. 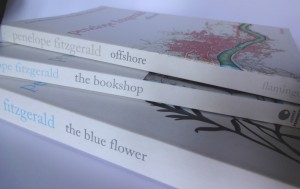 If you have never read this novel, I hope I have kindled your interest. And if you have, I hope you may want to re-read it. Her other works are also enjoyable: The Bookshop, The Blue Flower, Innocence (recommended in Julian Barnes’s piece in the Guardian which you can read here).

I note that Penelope Fitzgerald published her first novel aged 61.

Next Readalong will be Stoner by John Williams, enthusiastically described as the novel of 2013 on Radio 4 and a must-read novel of 2013 by Julian Barnes. Time for me to catch up. Join me in March.