Tag Archives: How it all began

How it all began by Penelope Lively

Moon Tiger is a brilliant novel that takes a long life and shows the reader how it is seen as it closes. Claudia Hampton was 76 years old and had lived a distinguished and active life. She is dismissed by medical staff and a doctor who ‘glances at his notes and says that yes, she does seem to have been someone’. Moon Tiger was published in 1987.

Nearly a quarter of a century later Penelope Lively gives us another older woman. Charlotte in How it all began is the 31st in the older women in fiction series on Bookword. You can find others through the various links on the blog. Thanks to Susan Kavanagh for recommending this in November last year in a comment left on the Older Women in Fiction page. 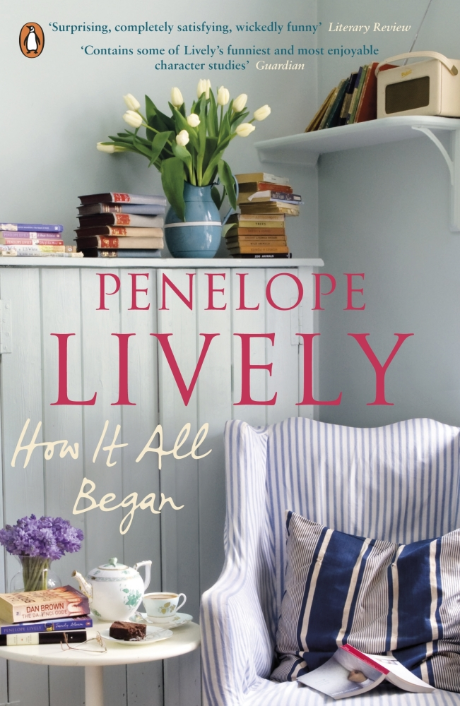 The story of How it all began

Charlotte (77) is mugged, and her hip is broken. She goes to stay with her daughter Rose while she mends. This sets in motion several other stories of other people, most of whom live in London. Rose meets Anton, an eastern European immigrant, and falls in love, when he comes to learn to read English with Charlotte. Marion has to step in for Rose taking her esteemed uncle to Manchester to give a lecture. Henry is not up to it and he must seek other ways of feeding his ego. Marion texts her lover to let him know she cannot meet him as arranged and the text is discovered by his wife, who threatens to divorce him. And so on.

The two older characters, Charlotte and Henry, have different views of their lives. Henry, perhaps fuelled by gender, feels entitled to respect and attention in his old age. However he is no longer able to summon up the learning of the past, or to make any impression upon people. He tries hinting at the discovery of a hidden scandal to impress the academic world, and tries his hand at television presentation. Both endeavours fail. He needs to face the fact that the world has moved on without him.

Charlotte, on the other hand, is comfortable with her position, except for her physical difficulties resulting from the mugging. She has had and still has a good full life and feels that her achievements feed into her current occupations. She eventually returns home, a little less steady than previously, but more comfortable in the world than Henry.

Charlotte is home. Grateful to Rose and Gerry; deeply grateful to be once more her own woman. She is mobile, if precarious, and there is Elena from the Czech Republic who comes in daily to minister, to shop, to do the household chores.

Home, alone, she picks up the threads. Pain is contained, corralled, though breaking out from time to time. Friends and neighbours visit – she is not really alone – the world is all around. She lives in an insistent present. But her thoughts are often of the past. That evanescent, pervasive, slippery internal landscape known to no one else, that vast accretion of data on which you depend – without it you would not be yourself. Impossible to share, and no one else could view it anyway. The past is our ultimate privacy; we pile it up, year by year, decade by decade. It stows itself away, with its perverse random recall system. We remember in shreds, the tattered faulty contents of the mind. Life has added up to this: seventy-seven moth-eaten years. (243)

It is common to believe that older people live their lives anticipating death, or lost in memories of the past. But I think Penelope Lively has it about right. Both Charlotte and Claudia are still active people in old age.

Other themes in How it all Began

The novel is not primarily a contrast between the two old people. Rather it is a meditation on causality, chaos theory and how people build lives and take or do not take account of others. Henry and Jeremy (something of an exploiter of women) are both excessively selfish and self absorbed. Anton is somewhat romantic and honourable. The importance of story for understanding lives is well illustrated in this novel.

Penelope Lively’s prose is knowing, somewhat scathing about some language use, but very perceptive about London life.

You can find the post on Moon Tiger here. It was the third in the older women in fiction series. Moon Tiger won the 1987 Booker Prize.

How it all began by Penelope Lively, published by Penguin Books in 2011. 248pp

Like a Mule Bringing Ice Cream to the Sun by Sarah Ladipo Manyika (2016 Cassava Press) will be my choice for April in the older women in fiction series. It features a Nigerian woman of 75 in San Francisco.