Walking in December on Dartmoor means low temperatures, the chance of fog and reduced daylight hours. But Dartmoor has beauty at every time of year. On our walk on Thursday 29th December we enjoyed a few of these. 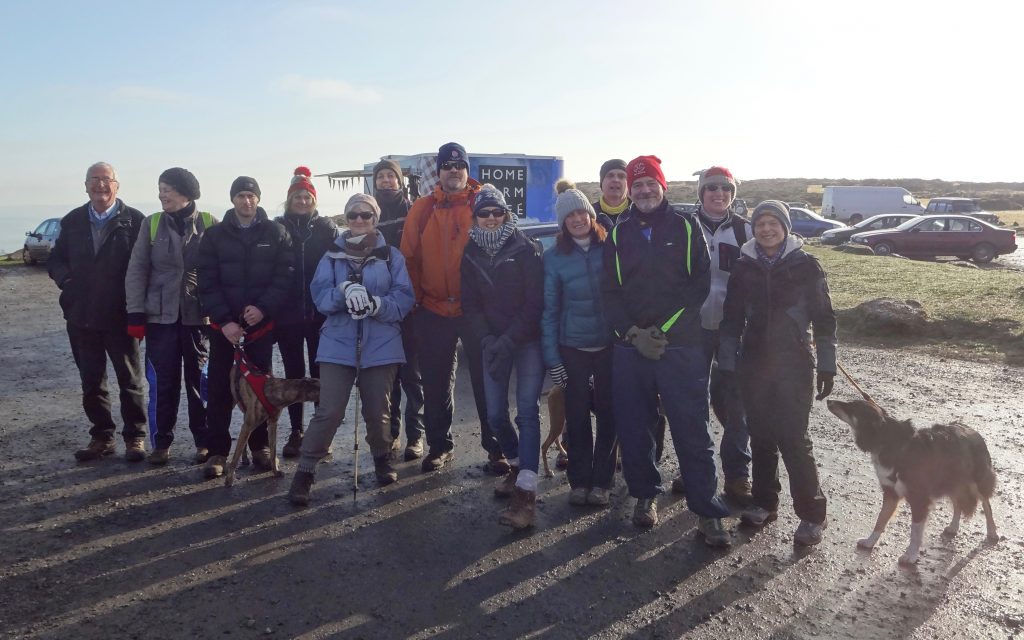 After our group photo we set off towards the rocks. People, especially children of all ages, cannot resist climbing them. They are impressive, massive, cracked, elephantine. After the first climb to the saddle between the rocks we considered the view and did some warm ups. The earlier fog was clearing fast and only lingering in the valley below. The fog seemed to follow the Teign Valley down to the sea. Denbury Down rose out of the mists. I can see both Denbury Down and, on a good day, Hay Tor from my study. It was harder to see my study from up on the Moor. 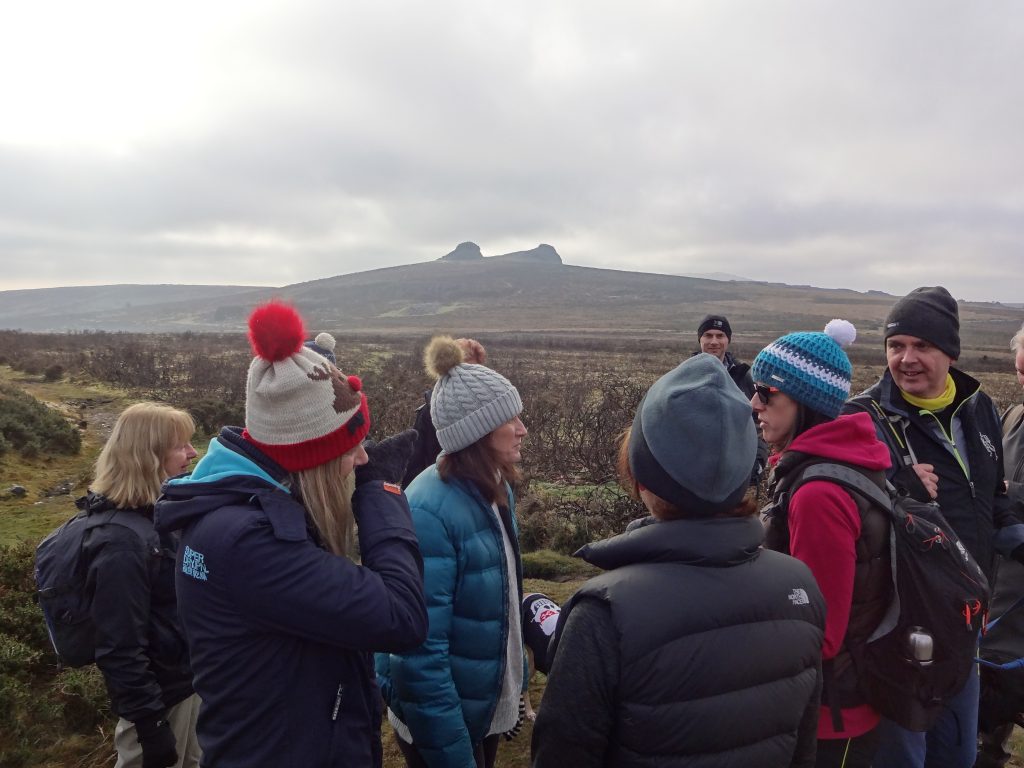 North of Hay Tor, having skirted the quarries, we met the tramway and the Templer Way (a marked walking trail from Hay Tor to the Teign Estuary).

Up here we did our second set of Pilates, in the picture walkers are stretching like a dragon, a friendly dragon. The dogs don’t seem a bit interested. 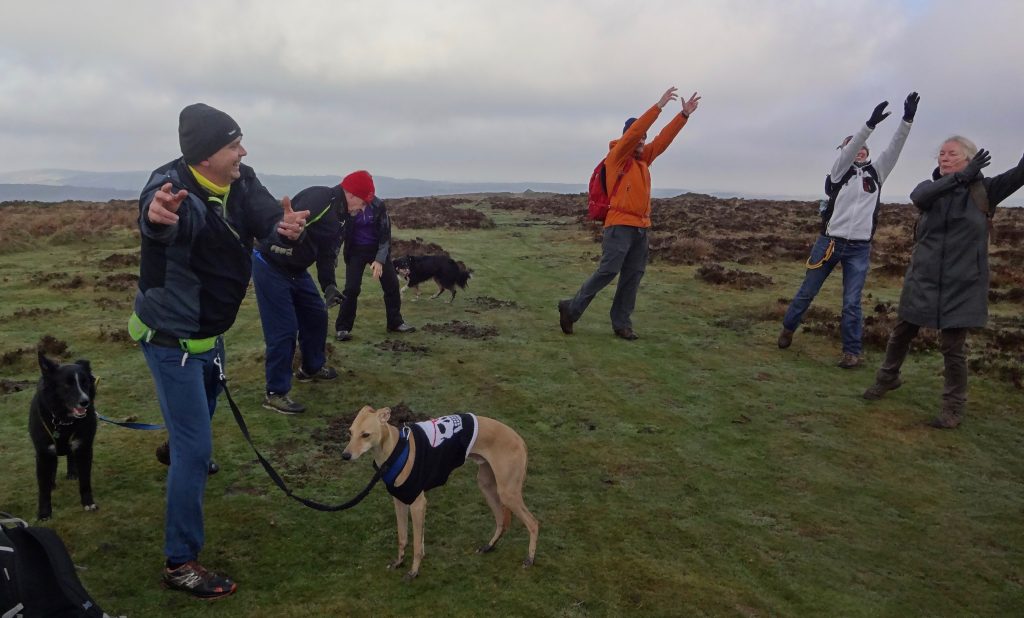 The next section was a steep descent, tricky and necessitating a walking pole. We could see into a valley, with villages, farms, fields and animals. Through the valley runs Becca Brook, which we crossed twice by clapper bridges. Between the two crossings we climbed steeply to Hound Tor. There is an ancient settlement, long abandoned, on the way to the summit. The map says medieval, but it may be much older than that. It’s hard to remember that the Moor was once much more densely populated than today. There were lots of people out enjoying the Moor, many with dogs, mostly in groups. The air was still and you could hear the cries of delight and summons for dogs and children all through the day.

From Hound Tor we had a more gentle descent back over the stream and then a climb to return to the Hay Tor Rocks and finally the car park. 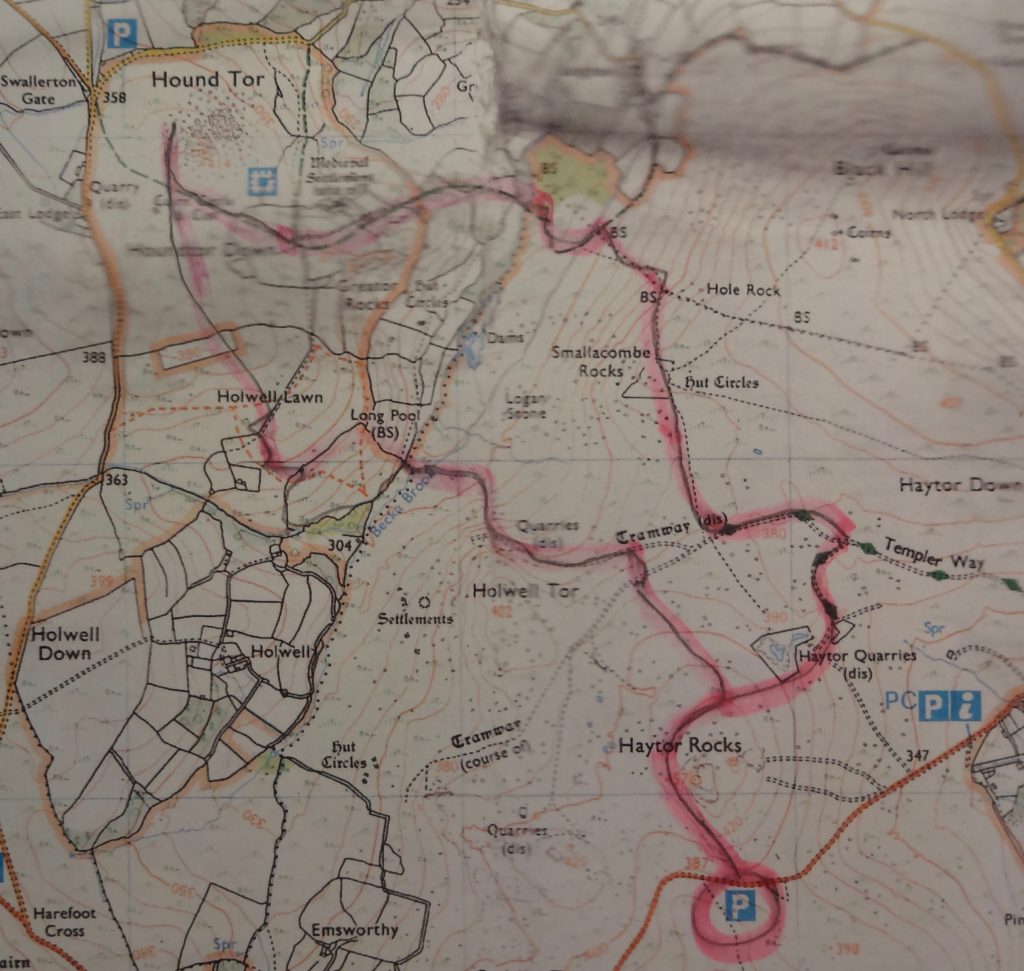 It’s fun walking in groups, you can talk or walk on your own, enjoy the dogs, share the humbugs. Nearly 20 people came along, and some dogs, supporting Freedom from Torture. Thanks to Paul for leading us, and to all who took part.

There was no real bookish connection to this walk. But in the Pintickle and Rhum, where we refreshed ourselves on completion of the walk, there was a portrait of Agatha Christie, and a set of her books over the fireplace.

My walks and challenge.

I am raising money for Freedom from Torture, through sponsorship of a monthly walk and blogpost. This is an extra post in the series. You can read more about the project on the page called My Challenge (just click on the page title below the masthead).

This extra walk was about 10km, (6+ miles). The map route, by the way, is very approximate.