Ruby by Cynthia Bond was shortlisted for the Baileys Women’s Fiction prize 2016. It was also selected by Oprah and has been a New York Times bestseller. I feel as if I have read a great deal in novels and in newspapers about brutal and dehumanising behaviour especially towards women and the wretchedness of the lives of those at the bottom of the heap, yet this novel still managed to shock and move me. 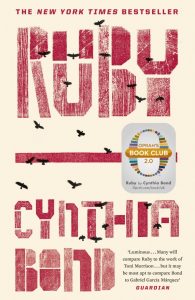 The story of Ruby

Ruby Bell was one of the prettiest girls in Liberty, a black township in Texas. She worked for Mrs Barbara when she was young and left for New York in pursuit of her mother. Her light skin enabled her to ‘pass’. She returns to Liberty, and as the years pass she is reviled by everyone for her unconventional and anti-social behaviour. Only Ephram Jennings, who knew her in childhood, wants anything to do with her.

After an incident outside the town store (see below) he decides to take her a gift of cake. Both his untypical assertive behaviour and the approach to Ruby are shocking and surprising to his fellow inhabitants of God-fearing Liberty. Ephram’s sister Celia, who baked the cake, sees Ruby as an instrument of the devil and forces the town to bring her brother back to her.

Ruby has powers to see spirits, especially the ‘haints’ (ghosts) of exploited and misused children. Most terrible is the Dybou, the spirit of Ephram’s father the Reverend Jennings, who introduced Ruby to prostitution when she was 8 years old. Everyone in this novel, female and male, has a tale to tell of abuse, be it lynching, exploitation or rape. The abuse reaches back into the previous generations, such as the story of Otha Jennings’s incarceration in metal hospitals.

The telling of Ruby

The story is told gradually, framed by Ephram’s commitment to Ruby and his attempts to bring decency, humanity and cleanliness to her life. He has to reckon with the judgemental attitude of the people of Liberty, revealed in the opening paragraph.

Ruby Bell was a constant reminder of what could befall a woman whose shoe heels were too high. The people of Liberty Township wove her into a cautionary tale of the wages of sin and travel. They called her buck-crazy. Howling, half-naked mad. The fact that she had come back from New York City made this somewhat understandable to the town. (3)

Within these few lines we have learned about the closed minds of the people, and of the posturing attitudes that dominate. There is some justification for the people’s suspicions of Ruby.

They had all watched, steadily, as she slipped into madness. Concern, mingled with a secret satisfaction, melted into the creases of their bodies like Vaseline. After a time they barely glanced up from their papers when Ruby walked up to the market. They yawned her existence away, or spit out a wad of tobacco juice to mark her arrival. A low joke might rumble as Miss P handed over her bread, followed by throaty chuckles.

But one end-of-summer day, Ephram Jennings took particular notice. One by one the men on the porch did as well. For instead of walking away with her bread, as she normally did, Ruby didn’t move. Her body rooted to the spot. She stood there, holding the brown sack, hand quivering like a divining rod. And then she peed. A long steady stream that hit the red dust and turned it the colour of brick. She did it absently, with calm disinterest. (5)

What are we to make of a woman, once so pretty, who offends against everyday decent behaviour with so little concern? The reader is being told that Ruby is not an easy person, not an innocent who is helpless in the face of the power of the people and especially of the dominant men of Liberty.

One of the most powerful, and alarming aspects of this novel is the role played by spirits. In an early scene Ephram recalls a shared childhood experience when Ruby is told by the exotic witch-like older woman, Ma Tante, that she is followed by ‘haints’ – a southern term for spirits or ghosts of lost souls. In adulthood Ruby refers to these as her children, and she counts among them her own aborted child from when she was forced to work as a child prostitute. But the pursuit of Ruby by the Dybou, who inhabits men’s bodies, is shocking.

I do not think that Cynthia Bond was excusing the terrible behaviour of some men by giving evil to this spirit-character, rather she was giving form to the worst behaviour and attitudes that one can imagine. And that it can thrive under cover of a respectable town and a man of the cloth is one of the themes of this book. We should be aware. 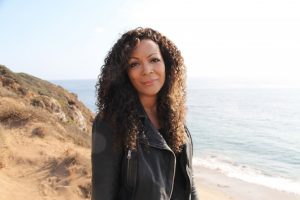 It has been described as a love story. Ephram is set apart from the other men in Liberty. He is weaker than they are, suffering chronic pain from time to time. Unlike the other men, he has patience and understanding and will bear the derision of the town and the manipulative ways of his own sister in order to support Ruby. He is not especially believable, but he is necessary in the plot to allow Ruby to stand up for herself.

In the denouement of the novel Ruby fights back against the evil Dybou.

She began to push out, with her hands. Her feet stomping hard on the ground. He held on, held on, until Ruby felt the tug, the anchor of the rope that bound them.

She looked at him, the fire of spirit burning through her eyes. She felt the tether weaken.

“I’m not meant for using! I never was! Never was! I ain’t never, never going to be used again!”

She felt the rope burn to cinder. He paused, then flew out of her. He seemed to shake, then fall away, swirling into the shadow of the forest until he became too small for Ruby to see. She sat in this new silence. Felt a new freedom in her bones. (326)

In the calm that follows the departure of the Dybou she recognises that the undemanding attention Ephram gave her has restored a little of her self-respect. That is the love story.

The novel is strong and shocking in its confrontation of abuse. The story-telling is wild and imaginative, with vivid use of imagery and language and wit (such as the name of the township). I could have done without the reading group questions and the recipe for Celia’s cake, but it’s certainly a book worth reading.

The shortlist for the Baileys Women’s Prize for Fiction 2016 also includes The Green Road by Anne Enright.

The winner will be announced on Wednesday 8th June.

Another enthusiastic review of Ruby can be found on The Writes of Women blog.

Cynthia Bond has a website, which includes details of various organisations that work in North America to help trafficked and other abused women.