Tag Archives: growing up for girls

Yuk! I read What Katy Did as a little girl, as many little girls did. My copy is old and battered, printed on war-time yellowing paper and has 1945 written in my childish hand in red pen on the title page. It was first published in 1892, written by Sarah Chauncey Woolsey under the pen name Susan M. Coolidge. 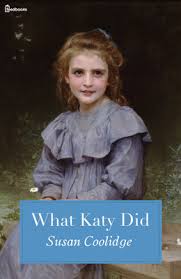 They say that good fiction allows the reader to identify with the main character. I certainly identified with Katy although I allowed myself to pick and chose the things I identified with. Like me she came from a large family of six children and Katy was the eldest. (I was the oldest girl of six siblings which wasn’t that different). Unlike the Carr children my mamma was not dead and we were not cared for by Aunt Lizzie. Like me, Katy was very tall – ‘the longest girl that ever was seen … up above Papa’s ear, and half a head taller than Aunty Izzie.’ (16) And Katy had wild imagination and was always getting into scrapes, although she knew she should be being good and taking care of the children, when she wasn’t learning her lessons or lacing her boots. 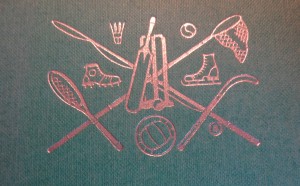 Katy is 12 years old and blessed with imagination, spirit but no patience. She gets into scrapes at school and at home and cares little about the effects of her behaviour. Refusing to accept Aunt Izzie’s injunction not to use the swing Katy falls from it as it breaks and in falling damages her back so that she is more or less bedridden for four years.

Aunt Izzie did not warn the children that the swing was unusable. The narrator comments:

This was unwise of Aunt Izzie. It would have been better to explain further. The truth was … that the swing really was not safe. If she had told this to the children all would have been right; but Aunt Izzie’s theory was that young people must obey their elders without explanation. (97)

The second half of the book follows Katy’s slow progress through ‘The School of Pain’. The insufferable Cousin Helen explains this concept to Katy. She will learn to become patient and cheerful, become the woman at the heart of the house and to make the best of things.

“Sometimes there isn’t anything to make the best of,” remarked Katy, dolefully.

“Yes there is, always! Everything in the world has two handles. Didn’t you know that? One is smooth handle. If you take hold of it the thing comes up lightly and easily, but if you seize the rough handle it hurts your hand and the thing is hard to lift. Some people always manage to get hold of the wrong handle.” (114)

Still looking for the smooth handle to life myself. Cousin Helen has some good ideas about learning, if not about handles.

“For you know we never do people good by lecturing; only by living their lives with them, and helping a little here and a little there to make them better.” (120)

And Katy learns her lessons and becomes thoughtful, patient and grateful. She does this by taking over the running of the household. Yes really. And to conclude the book demonstrates her newly acquired modesty.

“Oh, Cousin Helen, don’t!” said Katy, her eyes filling with sudden tears. “I haven’t been brave. You can’t think how badly I sometimes have behaved – how cross and ungrateful I am, how stupid, how slow. Every day I see things that ought to be done, and I don’t do them. It’s too delightful to have you praise me – But you mustn’t. I don’t deserve it.”

But although she said she didn’t deserve it, I think that Katy did. (175)

Why I hate this book now

I certainly absorbed the idea that suffering led to virtue. I am glad to say this idea has more or less disappeared, otherwise hospitals and doctors’ surgeries would be less caring and comforting.

And I absorbed the pernicious idea that my job as a child was to lose my impatience, my bossy exuberance, my imaginative games and my quick temper. I should be more meek, pretty, tidy and patient. Girls were constantly told this and Katy’s story underlined the message. By the way, although I didn’t want such a bad injury as Katy’s, I did believe that if life dealt me such a blow I was sure I would respond, and without Cousin Helen’s interfering and angelic prompting.

Yuk! It was the first in series of What Katy Dids. I probably read them all. Enthusiastically. 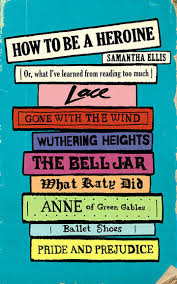 I am indebted to How to be a Heroine by Samantha Ellis for some of the criticism and inspiration for this post. Speaking of her own life, Samantha Ellis observes that pain did not teach or liberate her. I liked this comment:

I am pleased to find that What Katy Did is the name of a retro shop, based near me in Devon.

What Katy Did by Susan M Coolidge. Version used for this post was published ?1945 by the Children’s Press (London and Glasgow).

Do you have any views on What Katy Did? Did you ever read it?

Tagged as 'The School of Pain', Aunt Izzie, Cousin Helen, growing up for girls, How to be a Heroine, Sartah Chauncey Woolsey, sexist, Smantha Ellis, Susan Coolidge, What Katy Did