Friends and Relations by Elizabeth Bowen

I was browsing the shelves for anything as yet unread by Elizabeth Bowen and found not one but two old fashioned penguin copies of Friends and Relations. The novel was not known to me, but the writer is, and I have found her to be remarkable, whatever I have read of hers. 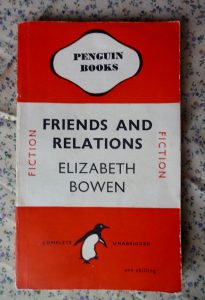 The novel opens with the wedding of Edward and Laurel. We are in the years after the Great War. This brilliant opening scene introduces the reader to all the characters, pegs them for their little foibles and faults. And it is entertaining and perceptive. Here is the bride and the father waiting for the ceremonies to begin.

Her clothes were all packed; she was buttoned into an old blazer of Janet’s and did not look like to-day’s bride. From half-past ten till noon she and Colonel Studdart, shut into the morning-room, played demon patience. Her life here was over, his at a standstill; there was nothing for them to do. (7)

This is typical of Elizabeth Bowen’s ability to present her characters through their actions.

Within weeks Janet (Laurel’s sister) marries Rodney. For a few days it seems as though the second wedding will not take place for there is an alarm. Edward’s mother, Lady Elfrida brought social opprobrium upon herself when she had an affair with Considine, and then did not marry him. Rodney is Considine’s nephew and heir. Edward refuses to meet the uncle. Although the marriage does go ahead, it is not before Janet quarrels with her brother-in-law, Edward.

‘But Edward, we really cannot quarrel. Please … Do think of what is convenient: we are relations for life. I mean, we shall stay with each other, shan’t we, at Christmas and everything? It would be impossible for Laurel and me to be divided. For as long as we live, I suppose about fifty years, we shall all always be meeting and talking over arrangements. At least, that is how we have been brought up. You must see what families are; it’s possible to be so ordinary; it’s possible not to say such a lot. …’ (46)

It seems that they are talking about his mother’s indiscretion, but this attitude of finding what is convenient, of being ordinary and not speaking of things is how they will live their lives, despite her love for him, and later his for her.

The second section describes a week in May, ten years later, when Edward and Laurel’s two children are staying with Janet and Rodney. There is a socially difficulty as Janet and Rodney live with Considine’s in his house. They decide to invite Lady Elfrida to join them, believing that after ten years Edward cannot still object and Lady Elfrida and Considine are now good friends. But Edward does object, and he arrives to remove the children. His action is the occasion for him and Janet to acknowledge their mutual love.

The third section is called Wednesday, and takes place the following week, when everything comes together. Janet admits to Edward that she engineered the meeting and marriage with Rodney to be more connected to him. Janet and Edward see the impossibility of being together more than as in-laws. They settle for being ordinary, for not saying such a lot. Briefly, others mistakenly think they have gone off together. As readers we see what the reaction would have been if the lovers had decided to be together in an unbearably difficult social situation.

The question that dominates the novel is what to do about love that is passionate, but outside and a betrayal of marriage? Lady Elfrida became a social outcast through her affair with Considine, especially as she did not marry him. Elizabeth Bowen makes it clear that their love was genuine, but has now changed to affection. Her son Edward is considered sensitive as a result of his mother’s behaviour. But in adult life he realises that he loves his sister-in-law Janet. What should they do once they have acknowledged it? Elizabeth Bowen herself came to a different conclusion from Janet and Edward, in her own life. She drew on her affair in the novel The Heat of the Day. 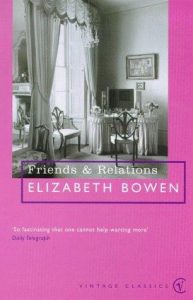 Theodora is a great creation, a kind of wild child in the first section, and then a mould-breaking adult, one of the surplus women of the inter-war years. Like Elizabeth Taylor, Elizabeth Bowen was very good at children in her writing. The House in Paris revealed her expertise. Theodora is some kind of relation, and brazenly out of step with her parents.

The Thirdmans were shockingly out of it. They had brought their girl, Theodora, for whom at each introduction they joyously turned. But she was never beside them. (11)

Theodora meets the bridesmaids on the lawn playing clock golf.

Their four little pink satin shoes were green-stained. There would be trouble, Theodora noted with pleasure. She was fifteen and, except for the bridesmaids, the youngest present. Every allowance made for her unfortunate age, her appearance was not engaging. She was spectacled, large-boned and awkwardly anxious to make an impression. (11)

Theodora fails to make an impression on anyone at the wedding. Ten years later she lives with a school friend, frequently spends time at Considine’s house, and visits Laurel and Edward in London. She cannot fail to make an impression as an outspoken adult. She provides light relief in the novel, but also reveals what happens to those who don’t fit in society in the inter-war years. 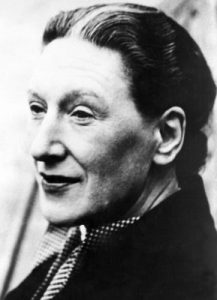 Elizabeth Bowen is skilled at communicating a great deal in a short space. She is also able to show the drama of small events, moments in domestic time, which have resonances down the years.

Friends and Relations by Elizabeth Bowen, published in 1931. My copy was published on that cheap brown wartime paper by Penguin in 1946. Price one shilling. 151pp

Books Snob’s blog review of Friends and Relations, in which she is pleased to have become acquainted with Elizabeth Bowen.

I have reviewed the following on Bookword blog:

The Heat of the Day

The House in Paris

Tagged as affairs, Book Snob, Elizabeth Bowen, Elizabeth Taylor, Friends and Relations, Penguin, The Heat of the Day, The House in Paris