Tales from the Vienna Streets

We begin with a hare and move through two visits to Vienna (a city never previously visited) and onto a laboratory. We start with The Hare with Amber Eyes by Edmund de Waal (2010), and finish with The Exiles Return by Elisabeth de Waal (2013). And, yes, there is a family connection: Edmund is Elisabeth’s grandson. 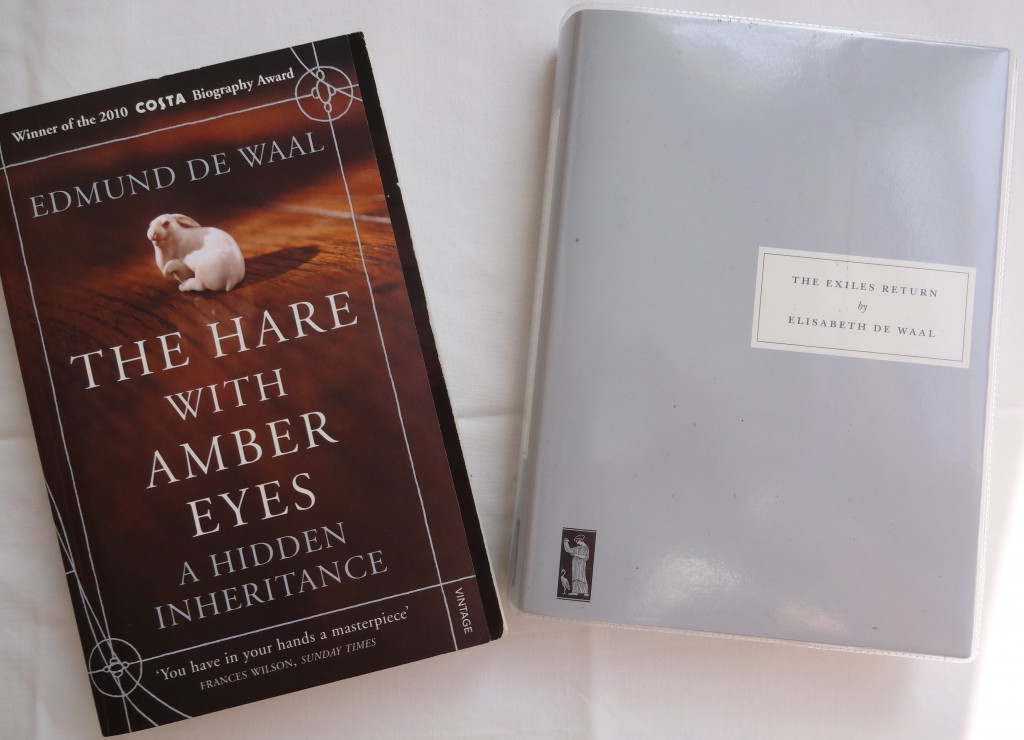 It all started two years ago when I found a copy of The Hare with Amber Eyes in a second hand bookshop. I had noticed it had been a best seller (Winner of the 2010 COSTA Biography Award), but had no idea what it was about, or even that it was not fiction. But like many readers as soon as I started it, I was entranced by the story of the hare and its 263 companions. For those who don’t know (can there be many of you left?) the hare of the title is one of a collection of 264 netsuke, those tiny Japanese wood and ivory carvings of animals, so beloved of the cultured and rich in nineteenth century Europe.

I’m a history graduate and twentieth century European history has always fascinated and horrified me. In this book I found the fascination and horror made personal, through the history of the netsuke and their owners, the Jewish Ephrussi family. Edmund de Waal, the current owner of the collection, and a potter of distinction, has the skills to tell the story.

The 264 netsuke were acquired for his family’s collection in Paris in the 1870s when Japanese art was very fashionable. The family acquired their wealth in Odessa as grain exporters, and in the mid-nineteenth century the sons had been sent to extend their business into banking in Vienna and Paris. The little figures were sent to Vienna in 1899 as a wedding gift to a grandson, Viktor, where they stayed in the Ephrussi palace for nearly forty years. But in 1938 the palace was ransacked when Austria was absorbed into the Third Reich and the property of Jewish people confiscated. This section of the story is especially dramatic as Viktor and Emmy (the grandson and his wife) became trapped and frozen as their world collapsed. When their daughter Elisabeth (the second writer) returned to Vienna after the war, trying to reclaim their possessions, the maid Anna told her what happened.

‘I couldn’t carry anything precious away for you. So I would slip three or four of the little figures from the Baroness’s dressing-room, the little toys you played with when you were children – you remember – and I put them into the pocket of my apron whenever I was passing, and I took them to my room. I hid them in the mattress of my bed. It took me two weeks to get them all out of the big glass case. You remember how many there were!

‘So I just took them. And I put them in my mattress and I slept on them. Now you are back, I have something to return to you.’

‘I know too much about the traces of my gilded family’, comments Edmund de Waal, ‘but I cannot find out any more about Anna.’ He does not even know her surname. ‘She was, simply, Anna.’

After the war-time rescue the collection got moved on again to other members of the family, to Tokyo and finally to London. Through the story of the collection of tiny objects we follow the misfortunes of the Ephrussi family and the larger historical and cultural convulsions in Europe in the first half of the twentieth century.

Reading this book was a final impetus to visit Vienna. The other impetus was music. I planned a visit to coincide with Gerry Finlay as the Count in Marriage of Figaro at the Opera House. I went to the Mozarthaus, walked in the cobbled streets, visited some art museums. Once was not enough, I returned within twelve months with a friend. This time we saw Don Giovanni, Irwin Schrott as Leporello. And we visited the memorial to the defeat of the plague, and Rachel Whiteread’s memorial library to the Jewish victims of Nazism in the Judenplatz. The city is crammed full of wonderful art, although enslaved to those ‘doing Europe’. There’s a good living to be made out of Klimt’s Kiss. I lost count of the number of souvenirs decorated with the kiss; umbrellas, purses, pens, pencils, teddies, trays, music boxes, bags, keyrings, lampshades, candles, mirrors, badges, glasses cases, cushions, scarves, paperweights, table napkins, coasters, tissues and even a Klimt cake in a café … 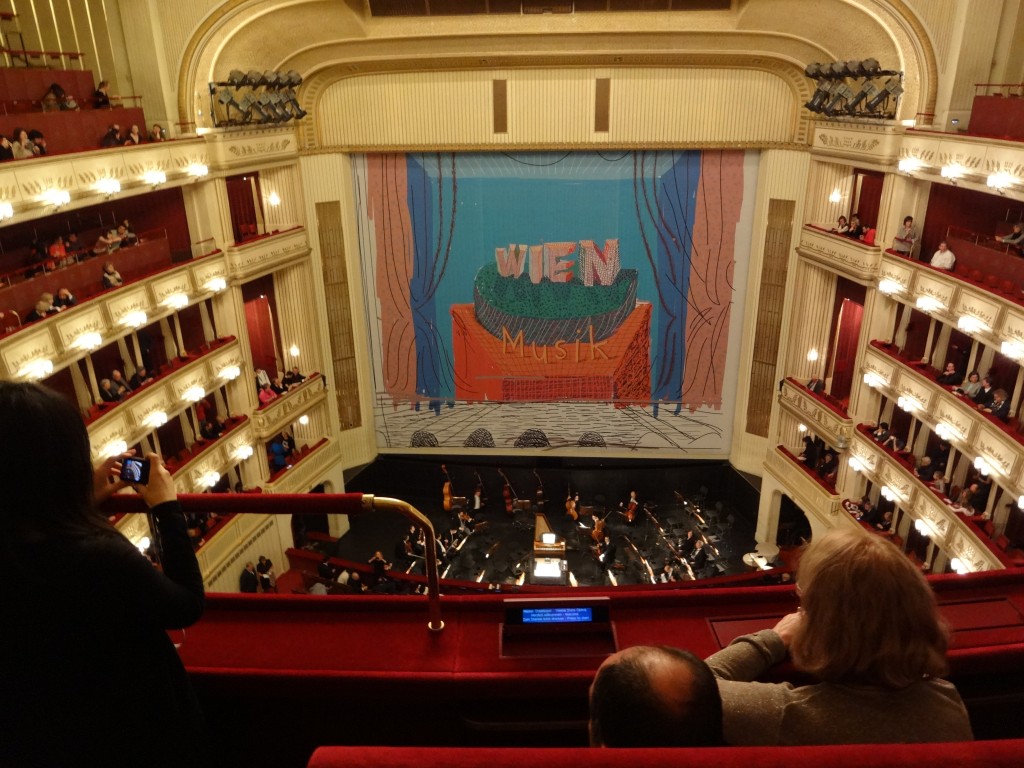 Brought up in that Viennese palace of the Ephrussi, Elisabeth de Waal was a resourceful woman who learned Dutch when she married a Dutchman, who wrote in both German and English. Her novel The Exiles Return, was published by Persephone Books this year, for the first time. It is set in post-war Vienna, in the 50s, just before the occupation ended and independence was granted. This city is familiar as the Vienna of The Third Man – Carol Reed’s quintessential film starring Trevor Howard, Joseph Cotten, Orson Welles and Valli – a city of corruption and intrigue. 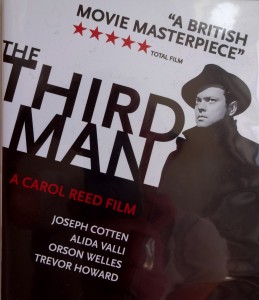 The theme of the novel is the pain and pleasure of exile and return, which we learn about through the contrasted experiences of two exiles. Professor Adler, being a Jewish scientist, fled Vienna just before the Anschluss. Although he had made a new life for himself in America he returned to take up the government’s promise of restitution. He is disappointed to find that he is not given the seniority his career would merit and that the wartime activities of those who remained is being whitewashed. The head of the scientific institute is keen to insist that he was investigated and exonerated of any crimes against ‘inmates of certain institutions’. In one of the most uncomfortable scenes in the novel, Krieger claims the neutrality of scientists to justify his actions.

‘My colleagues and I had the opportunity of carrying out experiments, testing and researching with the only biological material that can yield convincing results in the field of medical science … with live human subjects. … But I can tell you for your comfort that our material – I mean my colleagues’ material – were not Jews. They were Gypsies.’ (p107)

Professor Adler realises that there must be many unrepentant Nazis still thriving in Vienna. His return from exile means that he has to share the city, its past and future with them. Adler falls in love with another lab employee (also a princess, who no longer uses her title) and it is all ends very nicely for him.

Resi is the daughter of an Austrian aristocratic mother and a Danish father. They went to live in America in the 1930s. Resi is sent to visit her European family because she is not thriving, sent into the care of two aunts, who despite being princesses, live in very straitened circumstances. Old families are no longer so powerful. Money and deal-making are the new powers.

Resi is naïve and in this unfamiliar world easily falls victim to the machinations of richer and more subtle people. She is manoeuvred into promising to marry a rich Greek, so that he can hide his homosexuality, having being sexually exploited by an impoverished prince. Her story ends badly.

The novel shows us that exile is hard, even for those who chose it. Home has a pull, and yet home will have been changed, by the passing of time as well as the paroxysms of the war. The exile who returns will also have changed. There was a great deal of displacement in Europe in the immediate aftermath of the Second World War, millions of people experienced the discomfort of exile, and of return. And today people continue to move from country to country, into exile, fewer return home. ‘Most people living in Britain have a migration story to tell,’ says the welcome poster at the 100 Images of Migration exhibition (currently showing at Hackney Museum). 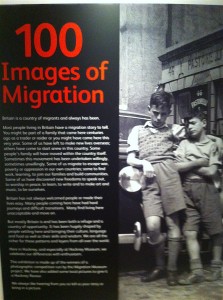 Although my journey began with the hare, I like to think of Vienna as Mozart’s city. It seems to have been less tainted when Mozart died there in 1791. Or as the romantic heart of the waltz, celebrated every New Year’s Day by a concert with more tradition than the last night of the proms. Vienna city of music, psychiatry, art, European History, knitted lamppost jackets … 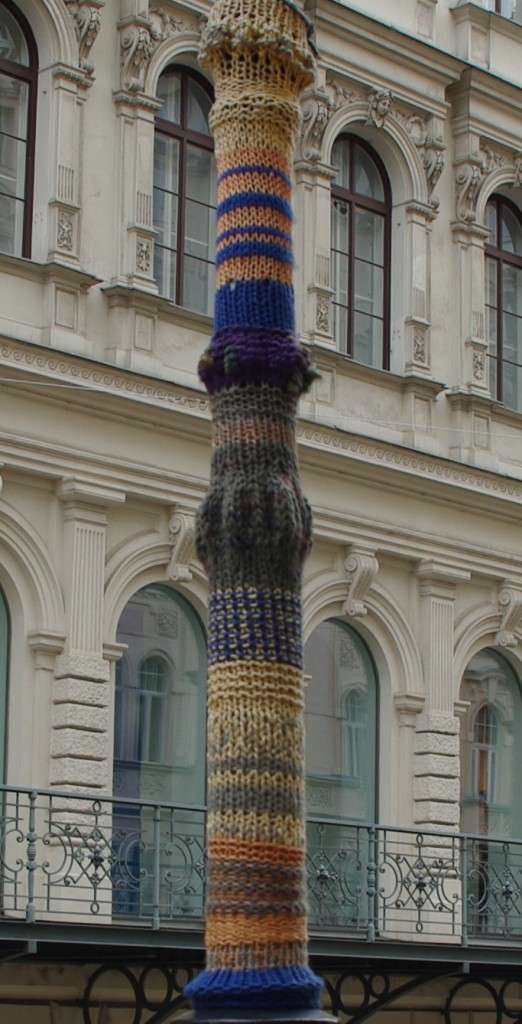 Have you ever travelled to a new place because you read about it in a novel: to the Mississippi after reading Mark Twain, or Moscow and St Petersburg after reading Anna Karenina? What other migration stories are there in fiction – The Grapes of Wrath by Steinbeck, …?