I chose this novel for the blog’s first reading group for two reasons: first because I think Elizabeth Taylor is a great writer; and second, because the main character is an older woman and this is unusual. Can you think of others? How does this wonderful novelist deal with an older woman? 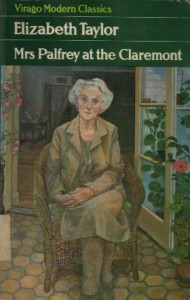 Mrs Palfrey at the Claremont was Elizabeth Taylor’s last novel, published in 1971. She died in 1975 aged 63 having produced 12 novels as well as five short story collections. 2012 was the centenary of her birth, celebrated with reissues in the Virago Modern Classic series. David Baddiel talked about this novel on 5th July 2012 for Radio 4’s Bookclub, and there have been a couple of films adaptations of the novels Angel and Mrs Palfrey at the Claremont. Despite this attention Elizabeth Taylor remains relatively unknown, relative to the quality of her writing that is. Perhaps one reason for that can be discerned from the title of her biography by Nicola Beauman The Other Elizabeth Taylor, published by the champion of neglected C20th writers, Persephone. And it may also be that because of her Home Counties life and classic good looks she has the undeserved reputation of writing about and for middle class women. 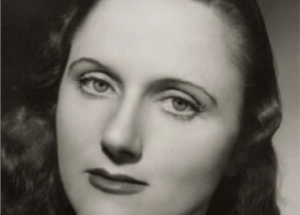 She was a tall woman with big bones and a noble face, dark eyebrows and a neatly folded jowl. She would have made a distinguished-looking man, and sometimes, wearing evening dress, looked like some famous general in drag.

Not a conventional heroine then. Mrs Palfrey is a genteel widow, needing to live somewhere, not invited and not minded to share a home with her daughter in Scotland. She moves into the Claremont Hotel on the Cromwell Road in London, joining a small group of elderly residents. Upon this group Mrs Palfrey practices a deceit. Having fallen in the street, she is rescued by Ludo, a young writer. Her grandson Desmond has failed to visit her at the Claremont. Ludo, who is lonely himself and attracted by the adventure of play-acting agrees to stand in as Mrs Palfrey’s grandson. It also allows him an opportunity for some research. Mrs Palfrey achieves a grandson and a visitor and establishes her status among the residents. One of the charms of the novel is how Mrs Palfrey and Ludo cope with the risks and difficulties that this deception gives rise to, including a visit by le vrai Desmond.

In Mrs Palfrey Elizabeth Taylor explores the behaviour of older men and women forced to live in institutions. ‘As they aged, the women seemed to become more like old men, and Mr Osmond became more like an old woman.’ They experience loneliness, neglect, boredom and financial problems. At the Claremont they are concerned to keep up appearances. As Elizabeth Taylor deftly shows, such a life infantalises them through the routines of mealtimes. The similarity to boarding school is explicit. They are ageing and it is inconvenient and embarrassing. Mrs Arbuthnot’s incontinence, for example, is the cause of her slipping further into dependence, moving to a shared room in a nursing home for the elderly. She tries to pass it off as a welcome move to a quieter place.

Elizabeth Taylor’s economic style and close observance of the individual characters and their relationships with each other brings automatic comparison with Jane Austen. But as Philip Hensher suggests here

Any woman novelist who writes grammatically, it sometimes seems, will sooner or later be compared to Jane Austen, but in Taylor’s case, the comparison is peculiarly inappropriate; … What she loved best, I think, were outbreaks of vulgarity, embarrassingly improper behaviour, people saying or doing exactly the wrong thing.

On the blogs I sampled, the reviews frequently suggested that Elizabeth Taylor has placed eccentric residents at the Claremont. I don’t think it is so much eccentricity that she is describing. Rather, she has a penetrating ability to pinpoint a mannerism or gesture or foible, an ability to present characters with their warts. I think she is much admired by writers as well as readers because she is so economical, her details telling us so much about a character. Neither comic nor patronising, she has an awareness of the ludicrousness of people’s behaviours and attempts to hide the truth.

Mr Osmond is a sour bore, because he is lonely. He is also afraid that the world is changing and writes letters of protest to the newspapers about being treated by foreign doctors. He hates the accents of the weather forecasters. He is taken with Mrs Palfrey and suggests marriage. The scene of his botched proposal has comic aspects because he handles it so badly. But it is also an authentic conversation resulting from his lack of perception and insight into another person.

These are ordinary people, observed without whimsy or exaggeration. Take this little scene where Mrs Arbuthnot, who has ears ‘sharpened by malice’, has asked Mrs Palfrey to change her library book.

It was like being back at school again and asked to run an errand for the head girl. She was just going out for one of her aimless walks, to break up the afternoon, and was delighted to be given an object for it.

’But if you’ve already read it …’ Mrs Palfrey began nervously.

Mrs Palfrey took the rebuke quite steadily. After all, Mrs Arbuthnot was the one who was doing the favour. (p23-4)

A small pleasure is the mention of books read by the characters. Mrs Arbuthnot ‘got Elizabeth Bowen muddled with Marjorie Bowen, and could never remember that there were two Mannings and two Durrells and a couple of Flemings.’

Elizabeth Taylor frequently explores the theme of loneliness in her fiction. She is quoted on this subject on the blog Dovegrey reader scribbles in a review of The Soul of Kindness:

I think loneliness is a theme running through many of my novels and short stories, the different ways in which individuals can be isolated from others – by poverty, old age, eccentricity, living in another country – even by having committed murder…

Another comment on the blog reviews was how the readers had found the topic of ageing and death difficult, and referred to their own grandparents or parents. But we need more books that explore this difficult area. There are other very good older characters in Elizabeth Taylor’s novels, such as Aunt Sylvie in The Marriage Group, who rewrites the labels indicating who will inherit what, despite having forgotten that some of the recipients had themselves died. She blamed them for neglecting her.

I haven’t seen the film of Mrs Palfrey at the Claremont, starring Joan Plowright. There will undoubtedly be more films dealing with later life, as there’s money to be made from us older folk. It’s my experience that films rarely offer as much as the original text, and older people get played for laughs: forgetfulness, incontinence, men pursuing young women and vice versa. Have you seen Quartet or The Best Exotic Marigold Hotel?

What’s your view of Mrs Palfrey? Perhaps, as Eileen noted here, not a book for the Desert Island, but I would strongly recommend it, and others by Elizabeth Taylor.

And to finish here are links to the walking book group, including a radio programme in which Clare Balding joined a group discussing our novel.