Short stories are not adequately commercial for small bookstores to maintain a dedicated shelf. Nor for the big publishers to risk publishing many collections, except by well-known and established writers. And all the big news stories in literature are about novels. I doubt whether any writer makes a living out of short stories. Is it possible? Let’s face it – few writers make a living from their writing.

Yet short stories are not going away. Enough of us are reading them, buying collections, writing them, enjoying them and blogging about them to sustain the survival of the form. 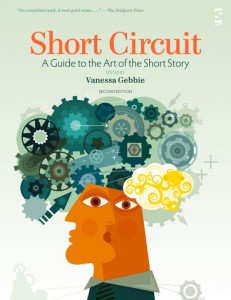 The form allows as much creativity as any other; of genre, style, plot and voice. They can be dark, as many are in the Salt collection (see below). They can be easy to read but have a sharpness just beneath the surface, as Elizabeth Taylor’s do – many were published in the New Yorker.

They often contain a moment of revelation and understanding in the last paragraph. This is not always comfortable. In Hilary Mantel’s story Winter Break she presents a deeply unhappy pair locked in the coping mechanisms of an unhappy marriage. The shock of the five last words indicates their inadequacy to deal with an experience on holiday.

Short stories are not novels-lite, yet the stories of Alice Munro are as rich as any novel, and the reader feels she has had the experience of reading a novel within one story.

We can be introduced to new writers through reading short stories; be given a great experience of creative writing in a nugget; provided with insights into different approaches to writing in a digestible length.

Short stories also provide a platform for writers not visible in other forms, especially for novice writers and for women: think of the numerous short story competitions such as Fish Publishing International Short Story Award, the Bridport Prize, The Asham Award, Costa.

There was a sudden burgeoning of the form in the hands of feminist from the 1890s on: see for example Daughters of Decadence, women writers of the fin-de-siecle edited by Elaine Showalter and published by Virago.

I often read a short story or two as I make a transition from one novel to another. They are like the best palate cleansers, worth savouring in their own right.

I love short stories, especially in anthologies. Nadine Gordimer said that short stories should ‘burn a hole in the page’. These three recommendations all do that. 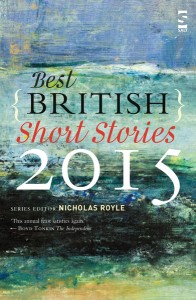 This is an annual series published by Salt. The 2015 collection has lots of dark obsessions and inverted takes on the world by inadequate people. I read these stories feeling as I do when I think I have found a new friend, only to discover too late that they are clingy and obsessive.

Nicholas Royle has a sharp tongue for those publishers that don’t help the short story project, a taste for the eerie, macabre and mysterious, and for the stories of Julianne Pachico. His useful introduction notes the growth of on-line publication of short stories, and celebrates the democratic approach of Salt Publishing.

No commercial risk to the publisher in this collection, even if many of the stories have been published elsewhere. The title story appears in the Best of British Stories and even caused ripples among the most somnolent of the House of Lords. The story was broadcast on BBC Radio 4’s Book at Bedtime and published in the Guardian review. Lord Timothy Bell and other Conservatives called for the police to investigate, and the word treason was mentioned. Mantel remarked that she was more interested in respect than taste in her writing. A short story piqued Thatcher-lovers – brilliant! Fiction produced apoplexy while the actual extra-judicial murder of Osama bin Laden was barely questioned.

There is a very dark strain through her stories and some are truly shocking such as Winter Break and The School of English. Mantel shows us the dark deeds of which her characters are capable and the women who are frequently the victims of abuse administered in subtle, gradual and calculating ways. Her stories have the power to make one uncomfortable without being far-fetched.

The Assassination of Margaret Thatcher and other Stories by Hilary Mantel. Published in 2014 by 4th Estate 288pp 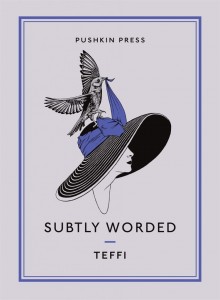 I referred to these stories recently in my post on Bookword in St Petersburg. and picked out two: Tolstoy and Rasputin. I wondered if the description of the meeting were true, and one reader left a comment to say that Teffi did indeed meet Rasputin.

Many of her early stories are variations on the theme of the biter being bitten, little denouements which are nicely satisfying. Later she came to portray people in Paris, the White Russian emigres among whom she lived between the wars.

I came across this collection in July on the blog called JacquiWine. Her review inspired me to buy the collection.

We should note and applaud the significant role of Indie publishers in supporting the short story. The platform they provide is less showy, less expensive than that of the great or popular. 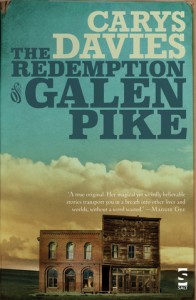 I’m looking forward to reading The Redemption of Galen Pike by Carys Davies, winner of the Frank O’Connor Short Story Award, published in 2015 by Salt.

Most how-to-write-fiction books assume novels, but I recommend Short Circuit: A guide to the Art of the Short Story, edited by Vanessa Grebble (published by Salt). Not only is the guidance relevant and helpful, but the writers all recommend further reading, further delights.

And BBC Radio4 occasionally broadcasts short stories, such as Tolstoy, a version of which can be found in Teffi’s collection and Hilary Mantel’s infamous Assassination.

For those who enjoy writing short stories there are many competitions to enter, not just the big ones mentioned above, but other respected competitions: the Exeter Writers and Bristol Short Story competitions, Mslexia (for women writers), and numerous on-line publishing possibilities (twitterati will see them in their time lines more or less daily, but beware of supplying publishers with free copy. Writers should be paid for their produce, just like car manufacturers and dairy farmers.)

An excellent article about differences in writing short stories and novels by Paul McVeigh from the British Council’s Voices Magazine.

My first post on this topic was called In praise of short stories and was published in November 2013. I’ve reused some portions of that post here,

I’ve mentioned Salt Publishing already six times on this blog so here’s the link to the website and you can order books direct from them.

Here’s a list of 13 short story collections from Bustle’s site.

Which stories and writers would you recommend? What have you enjoyed? Are you a writer of short stories? Where do you publish your stories?

In praise of short stories

Short stories are flourishing at the moment. Both the most recent Nobel Prize for Literature (Alice Munro) and the International Man Booker Prize Winner (Lydia Davis) are applauded for their outstanding achievements in short stories. It’s a form that embraces many genres, styles, plots, and approaches. A recent innovation was the sale by Penguin of a single short story, in electronic form (£2.99) well as in hardback (£7.99): The Embassy of Cambodia by Zadie Smith. It’s an attractive innovation and has probably only happened because electronic versions are economically viable. 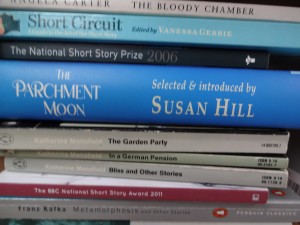 I love the form, writing them and reading them. They are not novels-lite, although the stories of Alice Munro are as rich as any novel, and the reader can have the experience of a novel in one story. William Boyd suggests that the form’s strength derives from its roots in our oral tradition (see his article in Prospect from 2006 called A Short History of the Short Story).

The great modern short stories possess a quality of mystery and beguiling resonance about them – a complexity of afterthought – that cannot be pinned down or analysed. Bizarrely, in this situation, the whole is undeniably greater than the sum of its component parts.

Nadine Gordimer says that short stories should ‘burn a hole in the page’. That’s another way of putting it.

I love short stories, especially in anthologies. They can introduce us to new writers; give us a great experience of creative writing in a nugget; provide us with insights into different writing in a digestible form. A friend recently introduced me to a collection called In a Fertile Desert: modern writing from the United Arab Emirates, translated and selected by Denys Johnson-Davies. For me, the stand-out story of the anthology was The Old Woman by Maryam Al Saedi, which provided a painful insight into the treatment and expectations of an older woman. One sentence burned a hole in the page for me.

Her children only became aware of her name when they had to obtain a death certificate.

Short stories have often provided a platform for writers not visible in other forms. This is especially true for novice writers, and for women: think of the numerous short story competitions by Fish Publishing International Short Story Award, the Bridport Prize, The Asham Award, Costa, to mention just a few. There was a sudden burgeoning of the form in the hands of feminist from the 1890s (see for example the Showalter Collection below) and women have continued to make significant contributions to the form ever since (see the Angela Carter anthology for a superb selection).

Perhaps because the platform they provide is less showy, less expensive than that of the great novels, publishers don’t like collections of short stories, except by established authors, or so we are frequently told. But this is hardly true of some of the smaller publishers (let’s hear it for them AGAIN! They do seem to listen to what sections of the reading public say they want to buy.)

Most how to write fiction books assume novels, but I recommend Short Circuit: A guide to the Art of the Short Story, edited by Vanessa Grebble (published by Salt). Not only is the guidance relevant and helpful, but the writers all recommend further reading, further delights.

Here is are five of my current favourite short story writers (not in any order and not necessarily the top five either – just five to celebrate): 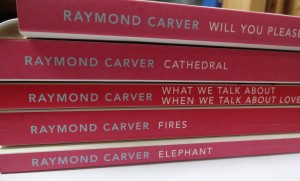 And five of my favourite anthologies (again, not in order and five to celebrate): 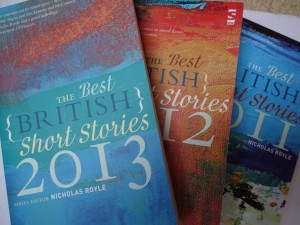 Regular readers of this blog will know I am reading through Elizabeth Taylor’s novels at the moment. When I have read them all I will start on her collected short stories. What a treat that will be.

Which stories and writers would you recommend? What have you enjoyed? Are you a writer of short stories?