‘It’s only me …’ That’s the first part of imposter syndrome. The second is ‘… and I’m about to be found out.’ This is a recognised psychological syndrome. According to some writing blogs it is especially prevalent in writers. I suspect that’s because they read mostly about writers and their difficulties. It is more likely common everywhere, and in all walks of life, with the possible exception of politicians who often are imposters but have no fears about discovery.

If any group experiences its discomforts more than others I suspect it is women, who, like everyone, suffer from believing they may not be good enough, but have the added experiences of being constantly told that women are not as good.

So there is a lot of it about. What can writers do to mitigate its paralysing effects? 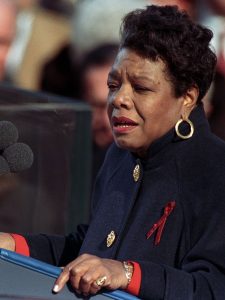 It is clear from a small amount of research that published writers also suffer from imposter syndrome. Maya Angelou was one, despite seven volumes of autobiography, and praise for her poetry. She was asked by President Clinton to recite On the Pulse of Morning at his inauguration in 1993. You can see her performing this poem here. Neil Gaiman is another, but he changed when he met another sufferer – Neil Armstrong – according to his blog.

In my writing group recently a member revealed that she wanted to write a book. She said she hesitated to say it in front of ‘real’ writers. And furthermore, when she thought about writing she always found something else to do, had no time available to write in, and no space she could shut herself away in.

Another member of my writing group recalled working for a poet, male, who retreated to his study every morning at 10 and expected to remain undisturbed until lunch was ready. There was some admiration for the man’s discipline and routine, but also the wry acknowledgement that the model was not altogether satisfactory for many women.

And it made me wonder what image of writers, ‘real’ writers, is common in people’s minds. Is it the silence, the closed doors, the removal from the world that our first member seemed to refer to? I mentioned a writer who frequently works in a café, loves the busy-ness of the public place. Perhaps by a ‘real’ writer she had a belief that this is someone who has been published.

A third member of our group reminded us that we can choose to call ourselves writer and that the only thing that makes someone a writer is … that they write.

Since imposter syndrome is not a rational condition, the solution is not to say ‘don’t be so silly, just write,’ but more to acknowledge that to be a writer you need to write.

The first piece of advice is Claim yourself as Writer and it comes from Writing Alone, Writing Together by Judy Reeves (2002).

Claim yourself as Writer.

Until you name yourself Writer, you will never be a writer who writes (and keeps writing).

Most writers I know, especially those who have not published, say, “I want to be a writer.” Or “I’m a [fill in the blank] and I like to write.” Or “I’ve always dreamed of being a writer.” But they don’t actually call themselves a writer. …

If you announce you are a writer, rather than simply mouthing that you want to be or you’d like to be, you may be transformed. Try it. Right now. Speak your name out loud followed by, “I’m a writer.” Let yourself experience the sensations you feel when you sound out the words. (2)

You can probably tell that this is an American text. Nonetheless, the first step is to claim I am a writer. The second step is to show up at the page. And the third step is to write.

And to support all of this claiming and naming, here are some ways to provide infrastructure for writing to substantiate the claim:

Imposter syndrome means being in danger of being found out

Just for a moment, apply some reason to the fear of being exposed. How often does it happen? Do you know people who called themselves writers and you find out that they aren’t? Or people who are bad writers? Actually this does happen. Dan Brown’s novels are frequently criticised for being badly written, publicly, loudly, and yet … You know he’s made a ton of money out of them?

Perhaps the fear is that you are an imperfect writer. This is true, you are. There is no such thing as perfection in writing, and even if your writing is excellent you still have more to learn.

But many, many writers have a fear that their writing will be rejected. The advice about rejection seems to be toughen up and grow a pair. I find this advice sexist and unhelpful. We do have to learn to accept rejection, and it is possible to argue that you learn through the experience. Writing being such a personal activity, in which writers have usually invested a great deal of themselves, it is not comfortable and to be told that your labours have resulted in something that is not wanted. And dispiriting. And discouraging.

Dorothea Brande in Becoming a Writer (1934) suggests that every writer goes through a slough of despond. Every thought appears to erode further the writer’s self-confidence. And, she suggests, many writers give up at this point. Only writers who decide to persist manage to crawl out of the other side of the slough, she suggests.

Another classic giver of advice to artists is Julia Cameron in The Artist’s Way (1993). Her approach is to practice affirmations, to turn negative thoughts into positive alternatives.

And what do writers say?

In Your Creative Masterclass (2012) Jurgen Woolf includes a helpful chapter on confidence. Checkov advises a version of turn up at the page.

You must once and for all give up being worried about success and failure. Don’t let that concern you. It’s you duty to go on working steadily day by day, quite steadily, to be prepared for mistakes, which are inevitable and for failures. (214)

Joyce Carol Oates, a very prolific writer, reminds us about writers who had to change after failure to become writers of other stuff.

One must be stoic, one must develop a sense of humour. And, after all, there is the example of William Faulkner, who considered himself a failed poet; Henry James returning to prose fiction after the conspicuous failure of his play-writing career; Ring Lardner writing his impeccable American prose because he despaired of writing sentimental popular songs; Hans Christian Andersen perfecting his fairy tales since he was clearly a failure in other genres – poetry, play writing, life. (215-6)

You may have your own tactics for dealing with that voice saying – it’s only me and I’m about to be found out. We’d love to read them. Meanwhile think on this. What happens when you turn up and write? What happens when you claim it and invest in it? Can you practise persistence and affirmation when it all seems discouraging? Could you read your poems at the next presidential inauguration?